I voted 3 for his wwf run, very naive when it comes to his wcw stuff. The dominator is terrifying

Apparently dude didnt need to work out to maintain his physic, lucky bastard

They were lightyears ahead with this angle, being the first black world champ and being condescended to by the likes of Harley Race and Vader 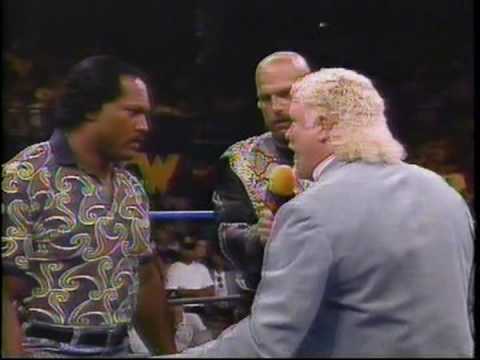 If he was a decade younger he’d have absolutely torn up the card as a legit, athletic big man (imagine him against the likes of Goldberg, Booker or Benoit when he could still properly go). Unfortunately he was given a stupid helmet as he began in the WWF, outshone by the Rock in the nation - who wouldn’t be tbf, and then too old to do much in the APA. But he always maintained an air of legitimacy, was pleasingly snug and was always charismatic and entertaining. A generous 3.

Setting up next one now so last minute votes please, I also thought as we did A.P.A but not Steiners (and let’s be honest we’re not doing Rick) then quick bonus poll

As we did The A.P.A the other day thought I’d open up a Steiners poll too as we ain’t gonna do Rick so: HWOATTWTR? The Steiner Brothers: poll

And who’s next (amalgamated from JBL thread)