5 for Michaels. He was one of very few with star power in the era I mostly watched and could make almost anything work - see the God angle against Vince. Told a brilliant story against Flair in the retirement match, the Undertaker arc worked brilliantly and while the Hogan match was obviously unprofessional, it’s one of the all time great kafaybe destroying matches.

I think if I’d known him more for his 90s run then I’d struggle to go above a 4 because of the politicking, but he was one of the few that could make WWE worth watching in the 2000s.

One of the wrestlers I grew up watching from The Rockers through to the early to mid 2000s.
So many great matches and memories.
The Rockers breakup was so shocking as a kid.
DX was always rubbish but funny enough at points.
Never thought he’d ever be back, but his comeback in the early 2000s was great.
One of the best wrestling memories I have is me and my younger brother staying up to see Shawn win the Elimination Chamber match and both of us going nuts with joy and jumping round the living room shouting, thus waking up the whole family and possibly neighbours.

late 80s/early 90s shawn is probs a 4, like bret it was obvious he was miles better than everyone else and you were just desperate for him to get the chance to main event

mid 90s / main event shawn, don’t know what to score him really. some good matches of course, but was badly miscast for a lot of it as a babyface, plus all the politicking and general dickheadery.

00’s comeback hbk is a 5. not as athletic as he was but for my money, had way better matches. shame he came back for that saudi deal though

4/5 for Shawn. Only know his stuff post return (5/5 for that), but he sounds like he was a total dick in the 90s. Iconic finishing move.

DX are -5/5 for me. Every wrong with WWF/E summed up in one shitty stable

Pretty much responsible for the modern style, and when he got it right like the first ladder and hell in a cell matches there simply was nobody better. I don’t really mind that he was a diva even, resting on his laurels for most of his career and pretty much openly over egging his back issue in 98-01 so Vince would pay him not to go to wcw. Now that’s a worker!
Was consistently a highlight of raw when he returned too, no matter what he was doing, but especially against the likes of Jericho and Shelton until they ruined it all over again with the pg-DX garbage. But then some absolute modern classics with Flair and Taker to cap off the career

And the Hogan match

4 but 5 because of sexy boy

Shawn and Sherri’s brief run together gives me life 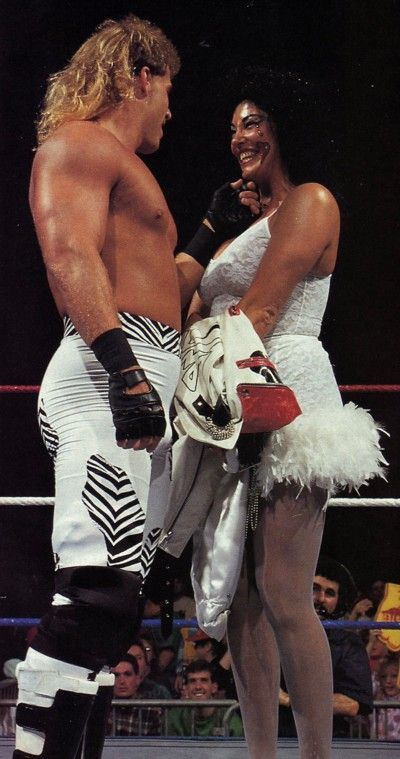 Sherri was so awesome man, she made everything work

Is sexy boy the greatest wrestling theme of all time

there’s surely never been heat even close to that, right?

This was perhaps the hardest favourite match poll yet because there’s another 5 I could have conceivably chosen. Fuck it, him refereeing Taker vs HHH hell in a cell WM28 is one of my favourite performances ever

@Severed799 I know this is rightly said a lot but just wanted to add some personal props to you for these threads.
Our first-born arrived on Friday and catching up on these threads at 3am and ending up in a rasslin youtube hole while he nods off on my shoulder is amplifying a lovely fuzzy time in my life. The Flair/Shawn ‘i’m sorry, i love you’… a blubbering mess at about 1.30 this morning but in the best way.

Congrats Al. That’s great news. Those early, hazy days are full of good memories. I remember watching a load of my favourite cycling stages during a similar time.

Rockers have got to be one of the best teams at the time and the barbershop glass smashing is still iconic. The last few years of his career, it’s amazing how many great matches he put together and those Wrestlemania matches at that time, Flair and Taker*2 (among others), what mastery and storytelling in his twilight years.
5 for me (Bret is still better though!)

Should probably get a Rockers poll on the go

And just for bants

Marty probably gets a one for being a very dubious guy and for potentially killing a man.

Nah never really got that impression.
There were loads of wrestlers around that time and before who were all about being ‘pretty boys’ but didn’t think Shawn was portrayed homoerotically on purpose, he was always shown to be a ladies man surely. Obvs if any fella enjoyed him in that way it’s fine too.

Thanks, Rich! That’s a great idea, getting a grand tour playlist ready for tonight!