have you ever seen the david brent film?

No, because it doesn’t exist

I probably should have written more about this in my recap review above.

You’re right there’s a lot of stuff that feels dated, and Michael is a particular vehicle for it. The episode where Oscar gets outed really stands out. Michael is obviously pretty grim in it - but he’s meant to be redeemed by the fact that he clearly values Oscar as his friend and tries to overcome his prejudices to accept him.

Like a lot of sitcoms, I think it tries to have its cake and eat it, making inappropriate jokes but having another character pull an “oof” face at it - two laughs in one!

yeah 100%. always think they’ve got a massive problem with the ‘blue-collar’ workers in the warehouse as well. its not exactly a sympathetic presentation, to say the least.

on the plus side it is kind of great that something that was made fairly recently feels so backwards now.

funny here when he says protruberance 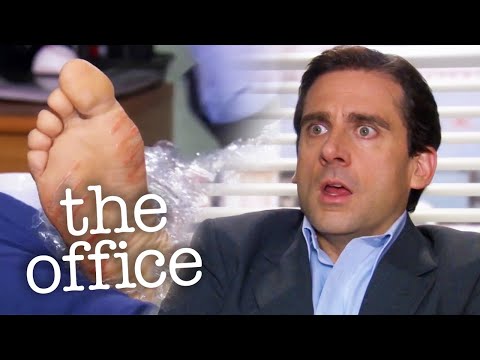 That is a brilliant episode. Think it’s the one where Dwight gets a concussion while rushing to rescue him and starts acting strangely. Remember absolutely cracking up the first time I saw him just typing DWIGHT DWIGHT DWIGHT into his computer.

Have watched the US version properly for the first time in sequence, rather than just the odd episode. Very very enjoyable.

I even got used to the interviews where they explain a joke, or how a character is feeling, in case you didn’t get it the first time. Still lazy and overused, but meh.

Up to the final season now though, and it’s becoming a real struggle to make it to the finish.

They’ve pretty much completely abandoned camera positioning and angles to give the impression there’s documentary crew(s) filming.
The characters have lost all mystery, so basically anything goes and nothing matters.

And there’s bloody Catherine Tate and a lab grown American high school student from the 80s who’ve rocked up.

Why Do We Still Love “The Office”?

The show’s enduring popularity, even during lockdown, says a lot about the place where we used to spend most of our time.

Nice piece, basically copies what I said above about trying to have it both ways with Michael’s insensitivity

I started rewatching last week and I cant believe how bad some of it is. I cant really expand on what you’ve said so we’ll here anyway but I’m pleased it hasn’t been totally glossed over in the thread.

I’m also doing a re-watch. To add to the list of issues: It’s hard to ignore the ‘love will save the day’ thing, and there are too many Black characters who are aggressive, intimidating or angry.

[up to late S8 now] I found Andy amusing at points but he’s not a good choice to fill Michael’s role and I don’t even like Michael - Andy is just a dull vessel. I quite enjoyed the Florida episodes, because of the change of scenery as much as anything, but Catherine Tate is too annoying to last beyond those episodes I suspect (we’ll see). I don’t find Kevin funny either - he’s such an unoriginal, fatphobic trope

Half the characters with double the screen time would have been a much funnier show. Ryan, Creed, Kelly and Jan are such enjoyable characters, Angela and Dwight’s early season Macbeth/Lady Macbeth deal is excellent, and I’m genuinely invested in Darryl. Erin is also one of the funniest characters by late S8 and Robert California is great. I really loved Stanley too but I don’t feel like his affair was in character for him - it seemed like way too much effort/chaos for him! - so I’ve not been invested since then.

Overall I think the least funny characters are Michael (just a level of shouty/obnoxious I can’t deal with) and honestly Jim by this point, the OTT mugging at camera is absolutely killing me at this point and I want to slap his face.

This is a really good summary imo. I watched The Office for the first time having seen everything its creators/writers have done since and I think - particularly with Parks & Recreation, Superstore and Brooklyn 99 (which I’m not even that big a fan of) - they’ve perfected something of which the Office now looks very much like a failed blueprint.

So many dislikable characters that you’re suddenly expected to root for; Michael’s incompetence/competence level being whatever the story demands at that exact moment and, as you said, not so much a supporting ensemble cast as a collection of tropes.

really like the moment when Pam reveals she is pregnant, doesn’t even cut to him but you hear Ryan say in the background ‘dont get it vaccinated’, don’t know why I find it so funny, good little character insight

Some of the talk here about the supporting characters in The Office US makes me think it could have done with fewer characters as it’s hard to effectively write so many who appear in every episode (shows like Seinfeld and Frasier work better for sticking to a core group maybe). But then it wouldn’t be much of an office I guess with fewer people there!

that’s why PnR is better for me, they trimmed the fat, not an ounce of bloat on that show - they even let one of the actors go because their character was so bland

Going to tell my kids this was Weezer https://t.co/3WgjNeHP79 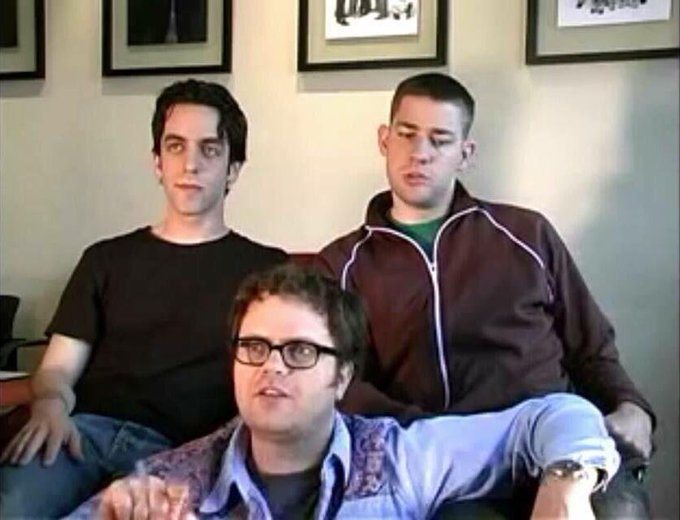