⚽️ How Good Was This Footballer Really ⚽️ #8 Ronaldo 🇧🇷

Messi scored 73 in a club season!

Ronaldo scored 47 in a season at Barca, Messi has outdone that several times

says a lot that we’re discussing Messi in this thread

very very few players where Messi is in any way relevant

A large part of that is because Messi played in a much better Barcelona team in an era when, Real aside, the rest of the league weren’t as competitive.

Too good for his own knees.

Frightening acceleration, power and control. Love that complication of video of him rounding pretty much every keeper in serie a and la Liga. On another level when it came to that sort of stuff. One of those rare players that has a signature style.

Will take some beating. 10. Probably better than Cantona in hindsight

wish I could vote 9.5. I don’t think he was quite as otherworldly as people are saying? I look back on his goals and skills and I feel like he’s one of a special group near the very top, rather than out there on his own.

although I think maybe I’m not taking into account the time and the leagues he played in when comparing his play and record with others. bossing Serie A near its peak is something else.

Don’t think I’ve ever heard anybody claim Ronaldo was the greatest player of the modern era before Marckee did upthread. No issue with it at all, but it did make me think that so much of the discourse about how good he was has been framed negatively - how great he could have been, whether he lived up to his early form, the injuries, the incident in '98.

At his very best he was the best striker I saw, I think. He could finish like Shearer and was as strong as him, but had the pace of, say, a young Owen, and the close control of a Greaves or Messi. Extraordinary.

Only won one league title in Europe, and never won the European Cup. Had to double check that, but Real won three just before he signed and have won four since he left.

Should have never left Barca. There was just something pure about him in that shirt at his peak.

scorer of my favourite goal of all time 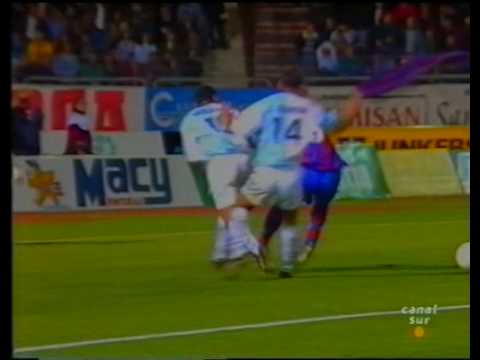 Maybe I didn’t phrase it right, but I didn’t mean that I think he’s the greatest player of the modern era.

I meant that he was better in his pre-injury period ('94-'99) than any other player has been at any point in the past 25 years.

bit harsh to not even call him a footballer google

Would love to know what really happened before the 1998 WC final. Excellent striker. That champions League display link above is perfect. 9.5/10

was ill with flu but nike forced him to play.

He had a stress-induced fit in the changing room, and Nike insisted that he play.

He’s best mates with Juninho (he’s half-brazilian and lived just outside Middlesbrough, so the club asked if the family wanted help him settle into the area)

i honestly thought this was a joke

After Juninho left for Atlético he went over and stayed with him in Spain for a few weeks every summer, and got to meet most of the Brazil squad who were based over there.

Some of the stories that he used to tell about Middlesbrough during the Robson/Gazza era are now pretty common knowledge, but at the time they seemed wild.

Some of the stories that he used to tell about Middlesbrough during the Robson/Gazza era are now pretty common knowledge,