Yep, I can do that. Might not be able to get to it today - or at least until much later - due to DIY for arrival of MiniGarnagle in a couple of months.

Holly Herndon is on a little Twitter spree about this today. Always very smart insights imo.

Think past "streaming", it is an old idea now Repetitive plays are a janky way to calculate value Considering streaming interactions the inevitable future of music is even more of a problem than any one platform
sean 21 March 2021 15:17 #243

0.2% - or if we’re rounding to whole numbers, 0%. (And this from an article *defending* Spotify. The numbers tell their own story though, don’t they? musicbusinessworldwide.com/artists-have-a…) https://t.co/rO7bpn8Agv 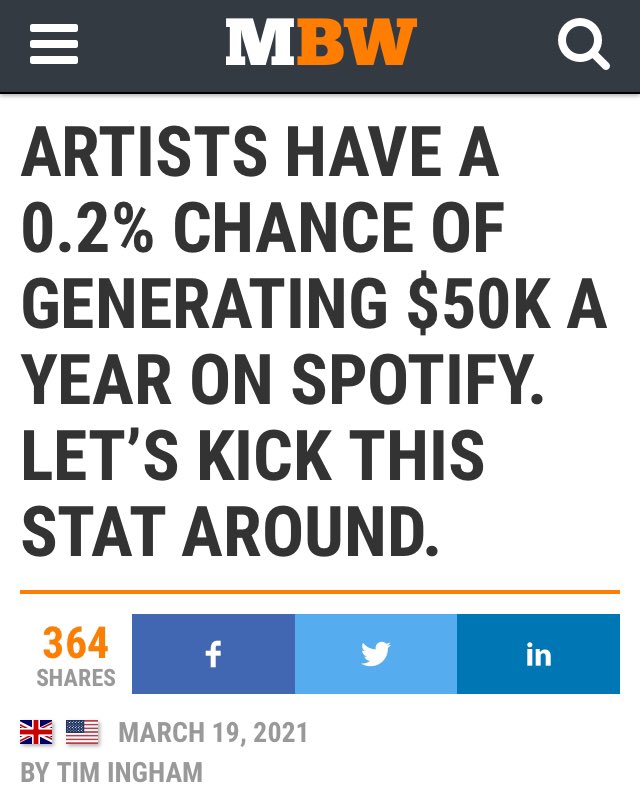 Billboard have tried to visualise how few artists are making a 💰 from streaming billboard.com/index.php/arti… Keep in mind most acts will owe an advance to their label & publisher. Or divide funds between various members or songwriters + management % + 🎙 🧑‍💻 costs | #BrokenRecord https://t.co/CcF8X85v9W 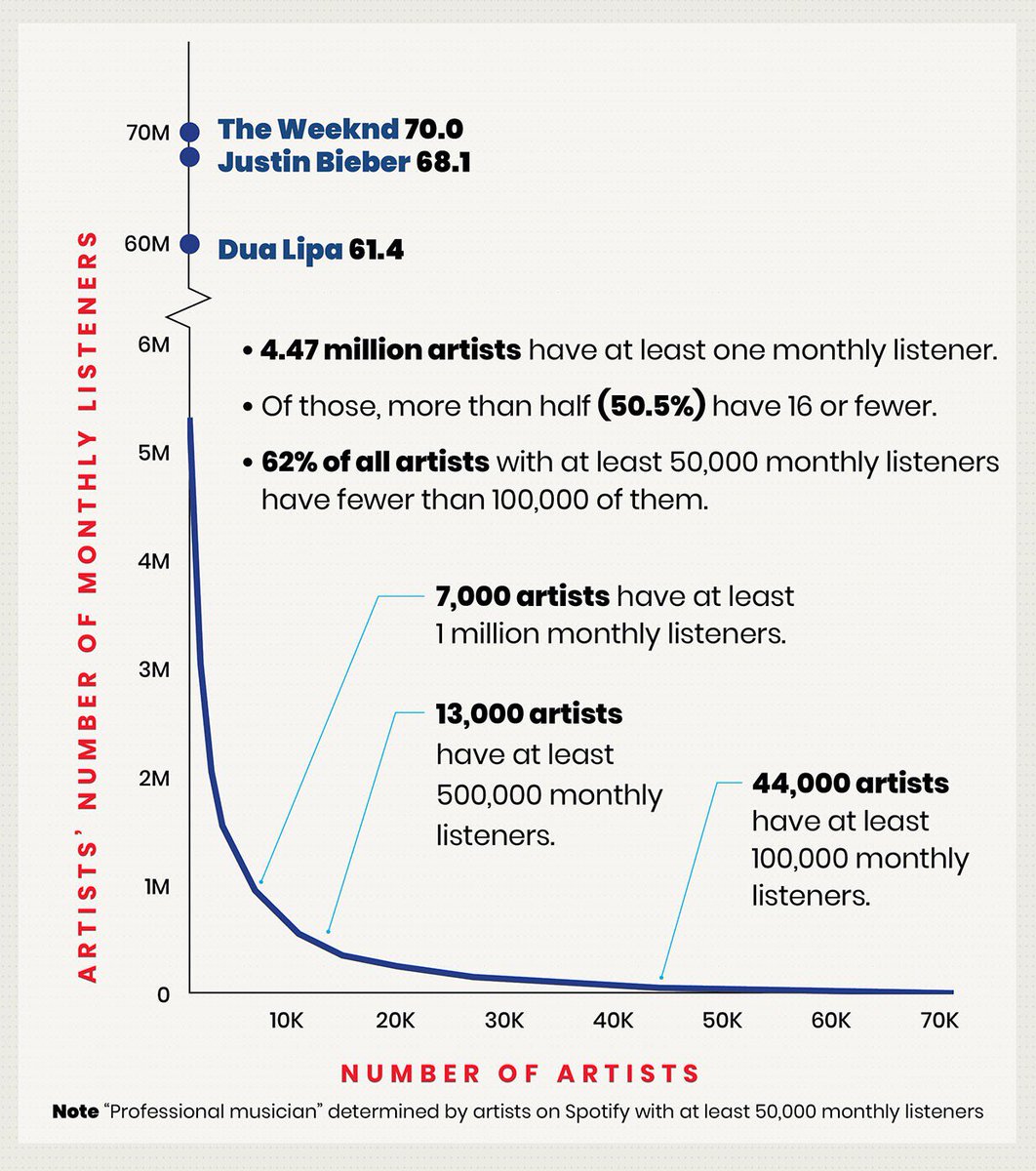 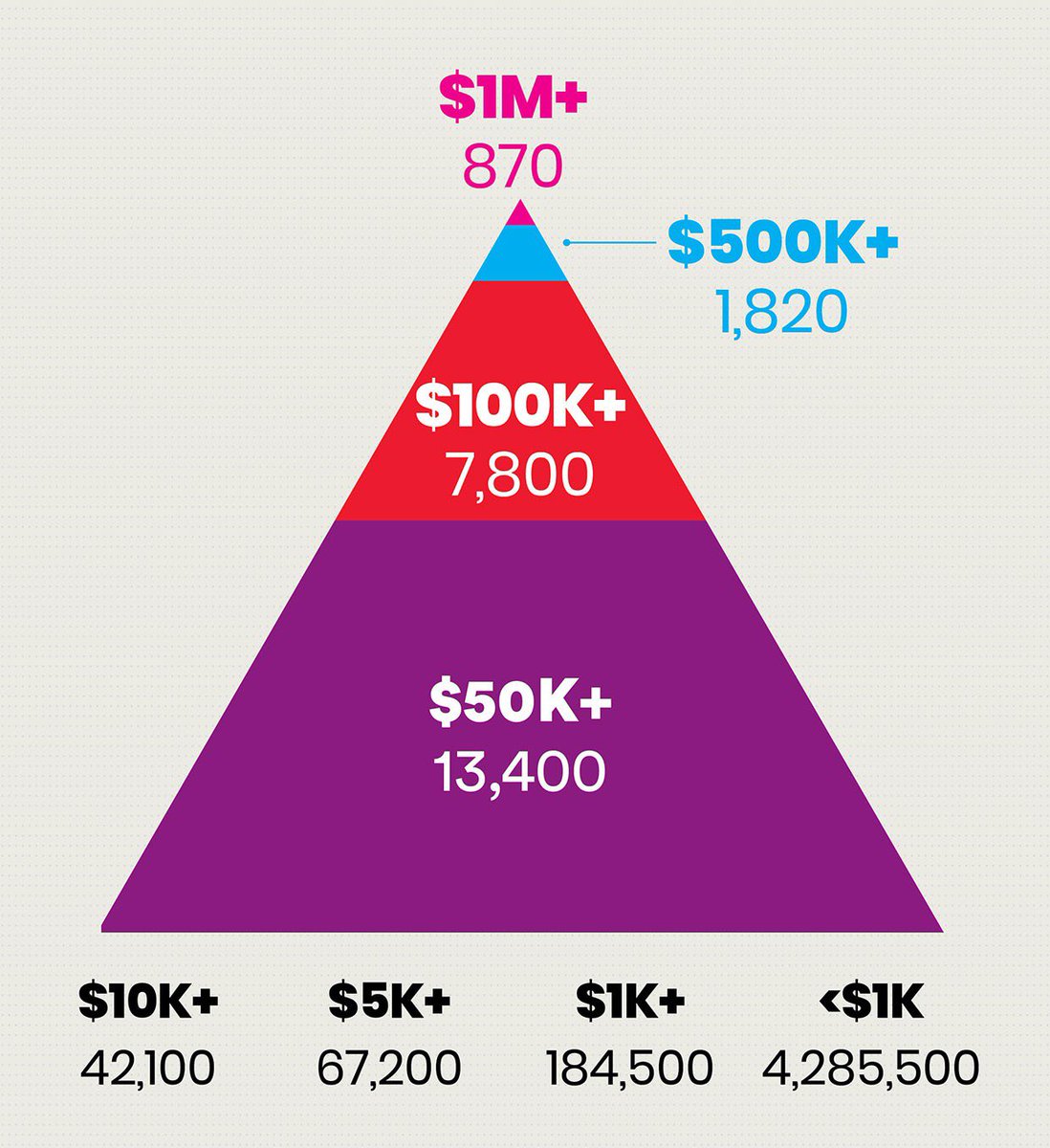 An ‘interesting’ sub point to this: I try to buy the stuff I like from your label on Bandcamp when I can but we have a family Spotify account that is a lot easier to use for listening than Bandcamp is either as a phone app or on web.

So this means you are effectively getting extra money I guess.

This is probably true for anything on Spotify that I have also bought in one form or another I guess. In very weird way I am now generating more revenue for the bands I loved enough to buy or I loved in the pre-Spotify days when I used my MP3s on my local player (phone or computer).

I do the same. But it’s probably not even contributing an extra 5 pence* in total for each album if you’re lucky!

*Number plucked out of thin air.

Yeah I assume it’s all ‘unique’ plays so it’s likely doing very little but it interests me as a group thing (do I mean ‘cohort’?) where cumulatively there are artists getting a boost of earnings via this sort of thing.

Thanks for doing that mate - you’re a fine fellow!

I do something similar and try to buy physical copies of albums I really like or artists I love, and then use Spotify for convenience, so often play the things I’ve already bought.

Financially speaking as much as I like to think I’m doing a good thing, realistically I think it’s only the high-level artists who properly benefit from this approach though. Thinking people like Taylor Swift who have millions of monthly streaming listeners, and enough of a core fan base who want to own their records too. At that level you have the weight of the figures behind you that streaming genuinely drives significant regular income on top of the bump they get when a new physical album is released.

I think where streaming does have the potential to help smaller artists is in pushing the music into other people’s release radars and recommended playlists, which in turn means that they might discover something they like and go out and buy it, or stream it enough that it appears in someone else’s playlists and so on and so on.

The financial benefit still depends on enough people being willing to make an actual purchase of course, but the more people it gets in front of the more likely that is to happen.

As I alluded to up there, I think the problem with the notion of ‘fixing’ streaming is the idea that there was a time when music distribution/consumption/etc wasn’t broken and it always was. I think there’s also likely a wider question about artists out there and really the fact that we don’t value art at all in a society where we make value a really important thing.

If we can ‘fix’ the music industry to work well within the capitalist framework it might be an amazing thing, though.

Yep, I’m not under any illusion that my streams of albums are giving the artists any music, but I genuinely find so much music from their Discover Weekly playlists tailored for me, and plus being able to check out the albums recommended in the weekly threads on this board. I then end up discovering and buying lots of new music (and gig tickets, when that starts up again). I/we are surely the minority in all of the Spotify listeners, but at least it’s something.

Although part of it must also be because I was brought up with having to buy music that I liked. If I was a teenager/person in my twenties today, I’m sure I’d find the idea of buying music too strange.

their Discover Weekly playlists tailored for me

I don’t find their recommendations brilliant, but I do / did find the Release Radar incredibly useful. Traditionally this has featured new releases at the top each Friday, usually close to the order in which I’ve listened to artists most in the past. Last week it came in very different though - St Vincent (who I think is okay, but not bothered about) was top of the playlist and a load of “big” names from the past few weeks were clogging up the top. Some of my favourite artists were way, way down the list even though their music had come out that day.

I reported it to “Spotify Cares” but I’m really worried they’ve fucked this feature in favour of keeping bigger names who pay more at the top.

Anyone else found that happening?

Do you ‘follow’ artists on Spotify? I do that for all my favourites and the new music I like, so it seems like that must influence my Discover Weekly playlists (plus me adding my favourite discoveries into a separate playlist).

My Release Radar, as far as I can tell from a quick check now and remembering from precious weeks, is pretty much 90-100% filled with artists that I follow. So I don’t get any ‘big’ artists popping up on it. but maybe that’s different if you don’t follow bands, and so they come up with some formula as to what they should populate it with?

The order of it does seem a bit random though. It just takes me a whole to click through each one to see if it’s a single (in which case I’ll mostly ignore it) or an album for me to download and listen to.

Yeah, it’s only got artists I follow on it - but the ordering is all to pot now. It had been mostly in release order before with a bias towards the ones I listen to most at the top.

I’ve unfollowed St Vincent now and might do the same for others I’m no longer so bothered about. I probably do follow too many!

Another crap new thing seems to be people cheating by calling themselves the same name as bands with a big fanbase who haven’t done anything in a while (or genuinely just didn’t know about ye olde bands). In the past few weeks I’ve had “new releases” from Saint Etienne, Inspiral Carpets, James, Lush, Belly and Low - all of whom seem to have been bedroom musicians.

The spotify one’s totally have promotion shenanigans going on and they recommend very few albums weekly - even from bands I’ve listened to a lot - they wont get served to me but shite I have no interest in will pop up and stink up the page for WEEKS.

I think the larger independent labels should join together to develop and launch a new platform with an equitable payment mechanism.

I believe that digital listeners want to invest more in the artists they love bit the options are limited.

Bandcamp’s fees are too high and the interface and player isn’t the best. For that reason I’m dubious of their motives and the experience is clunky.

Tidal or Audius (but the catalogue isn’t saturated yet.)

Bandcamp’s fees are too high

Interested in this. That’s a huge amount of storage they’re providing and it must be a huge cost. What what make their fees reasonable in your view?

Bandcamp’s fees are too high

I know it varies a bit between digital and physical formats but I thought Bandcamp essentially charged 10%. That seems a really very reasonable fee for what they provide. That compares to the 30% iTunes and Amazon charge. Or are there other fees for the artists that are less transparent?

Personally I think the interface is brilliant in one key way - which is that it provides proper engagement with individual artists. As a player it is obviously limited but it isn’t a streaming service so that’s understandable.

I’m really torn on bandcamp. Part of me wishes they’d do a full on streaming service, but increasingly I’m just anti the whole idea and think bandcamp should just keep doing what it is doing. Caveat on that is i don’t have any real knowledge of the company or experience as an artist. There might be lots of reasons to be, as you say, dubious of their motives.

If an artist isn’t selling any downloads, so bandcamp don’t take any commission, is this a lot of storage bandcamp is having to provide for no benefit?