I want to buy a radio

Not sure how much I want to spend but I reckon I would go up to £100 if it seemed worth it. Might go even higher but not sure how much value there is above that price point.

Want the best possible sound quality and if it looks nice that would be cool too.

What do you need it to do that a £20 dab from the supermarket won’t? Do you mean like a hi fi separates one?

I have a little cheap one and I just plug it into my kitchen speakers via the headphone socket. does the job perfectly

What do you need it to do that a £20 dab from the supermarket won’t?

I guess I’m either wanting to know which cheapo ones sound the best, or I’d like to know what is realistically the next step up. From starting to browse there are radios for £20 and for £200 that appear to do basically the same thing. I don’t need alarm clock functions or anything.

Pure are nice, if a little overpriced

“Alexa play 6Music” is all you need though, surely?

A bluetooth speaker is also a very cost effective option.

I have a minirig, so portable speaker is already owned

We had a shit cheap radio in the kitchen until this weekend when my housemate moved out. It was nice just having it there on all day, then occasionally getting lucky and hearing something good on 6 Music.

That’s why I’m after a radio unit specifically rather than just a way of listening to the radio, if that makes sense.

The one we just lost had really poor sound so would like an improvement.

Did the old radio have its own speaker you were using though? My radio is mono bullshit when played through its own speaker, but sounds absolutely fine through a set of proper speakers.

100 pounds for a radio seems like a waste, probably best getting a smart speaker and leaving it tuned into your fav radio station

I think having a radio and then also a speaker would take up too much space. And I don’t want to buy more speakers. This house has so so many speakers, seriously.

I’m currently listening through my B&W speakers, which are sat on my old Sharp speakers. The living room has a PA system with a sub that’s a cube about 3ft on each side, then I think we must have about 5 or 6 minirigs in total.

I’m buying this radio to look nice and sound good! 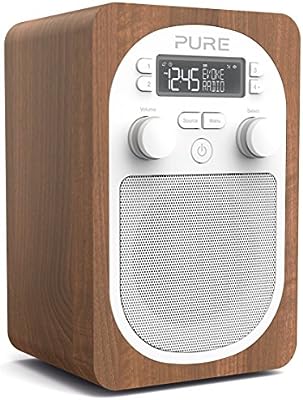 Radio? Who needs a radio?

Wish they still made these I’m listening to 6Music on one of these right now and it’s fine. Sounds nice, looks nice, works nice.

I have a Roberts Revival. You’re paying for the appearance but the sound is never terrible

Dead interested to hear your opinion on this. I have coveted one for a long time

Think our is H4. It is pretty decent but since we got a google nest it doesn’t get used anymore.