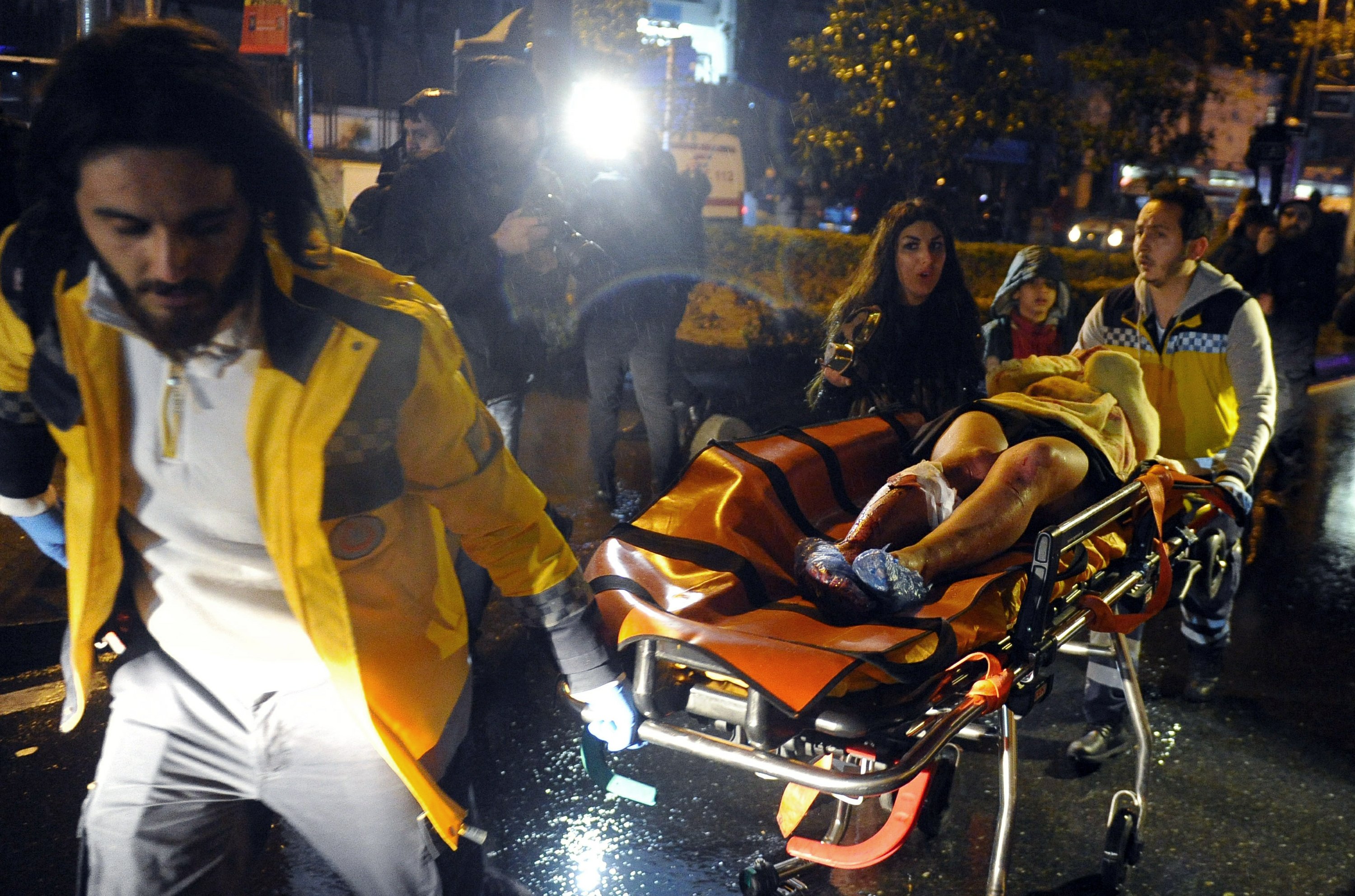 ISTANBUL (AP) — An assailant believed to have been dressed in a Santa Claus costume opened fire at a crowded nightclub in Istanbul during New Year's celebrations, killing at least 39 people and wounding close to 70 others in what the province's...

Been reading about this all morning, sounds horrific

Apparently the nightclub owner was warned last week that the club may be targeted.

Conservative newspapers in the country had been openly warning everyone not to celebrate on NYE. No idea how that wasn’t chased up.

Terrible. Feels like Turkey’s particularly vulnerable given its location alone, but also it seems there are so many people pulling in different directions, and so many third parties pulling strings behind the scenes that it’s hard to know where to begin or what to believe. Pretty certain we’re going to have a full-scale world war in the next decade, if it’s not started already.

Haven’t people been saying that about another world war every decade since the last one?

Bit puzzled by your stance on this one, bud, really…

Idk. Who would stop Putin if he decided to expand further into Ukraine, or Georgia? I’ve been to both Estonia and Poland relatively recently and people are privatelty pretty terrified. Perhaps ‘world war’ was the wrong term to use and a bit dramatic, but it feels like in the very least we’re in for a lengthy period of extreme instability in Europe, at a time when Russia seems to be becoming incredibly powerful.

With regards to Turkey, again idk, i’d be interested in any articles that may get me a bit more up to speed. Particularly interested in the arguments for and against Erdogan’s government, the legitimacy of last year’s coup, the role of the Kurd factions and who’s funding them, etc, etc. Been reading a bit but not sure what to believe.

Hope i’m not being a bit…insensitive here by asking the questions. Can’t help but feel that i am.

Bloody hell this is reall horrible

had seen nothing about this on any of my feeds today (shock).

When Putin came to power he used a weird tactic wherein he funded different kinds of groups - from anarchists to neo nazis to pro-gay rights to hardcore queer bashers and even anti-Putin agitators - to set them at each others’ throats. What made it really weird is that he freely admitted this is what he was doing, and assumed even more power because of it.

The problem for the West is that he’s now doing this on a global scale. Supporting Assad in his war “against terrorists” while bombing civilian areas and simultaneously admitting and denying he’s doing it. Hacking the U.S election, subverting the most powerful democracy the world has ever seen, while playing Trump and the American people like total assholes and doing it so blatantly he and his advisors surely knew how farcical their denials would appear and what the likely reaction from the outgoing Obama admin would be; speaks to a definite longer-term strategy.

The genius thing about Putin and his gov is also the most troubling; he sees so far ahead of his political contemporaries at home and abroad that he can play the game in the most cynical and contemptuous way imaginable. He’s a master of subterfuge and dissimilation.

This is a good thing in many ways - yeah, Trump is in office but he’s also very much into Putin for something - God knows what kind of dirt Vlad has on the bewigged one. Plus Hilary Clinton was denied the big chair - a huge relief for many in the Middle East and elsewhere considering how bloodcrazed and dirty she is.

America is in freefall atm and has been going slowly insane for the last 17 years - since their humiliation on 9/11 they’ve lost two major wars, experienced major economic recession and just elected an orange carnival huckster and full time asshole because the only alternative thought it would be really clever to covertly promote Trump’s nomination in the mistaken belief he’d be easy to beat (which America discovered shortly after the Russian hack).

All of which points to Russia’s growing power, sure, but China are also keeping an eye on the situation and as the pendulum shifts from West to East I think they’ll play a crucial role as a kind of counterweight to Russia’s imperial ambitions (and by association whatever stupid lethal moves America might try to make as its power fades and it seeks to regain its former glory or court favour with their new Soviet bear overlord).

Main problem atm is obviously the Middle East, especially with Israel still reeling from Obama’s sweet last min shank, several nations entering maybe another century’s worth of bloodshed and Turkey/Iran/Saudi getting ready to go full on red alert. Specifically I’m concerned about random actors such as ISIS - they’ve demonstrated to a lot of other crazies that with solid organization, the right friends in, for instance, the Saudi royal fam, and with a sound, persuasive and internally consistent reading of a given theology or ideology, immense riches and power are there for the taking.

Add to that the growing threat of climate change, insatiable capitalism and so on, and things are definitely going to get more volatile. I don’t think it will be a world war in the sense we think of one, tho - it will be an intensification of what we have now, which are a swarm of different conflicts tangled up with one another globally while online various propagandists flood the net with disinformation, punctuated by increasingly larger acts of political terrorism and assassinations which lead to more draconian forms of authoritarianism and state-mandated consumerism.

Exactly, we’re only fretting about the prospect of war because the chaos we once kept contained over there, amongst the wogs and the darkies, is now spilling over here, which is simply not meant to happen, and is manifesting in our gradual normalisation of the far right narrative, suicidal indifference to the dying ecosystem, general unwillingness to believe just how canny an operator Putin is, and increasing terrorist attacks. I think my assessment upthread is fairly on the money tbh; we’re panicking because for the first time in post-modern society we’re confronted with a story in which we aren’t destined to fight the good fight and win nor play a particularly influential role with the reemergence of Russia and China. Creates a bad cognitive dissonance, smacks of colonial condescension too - try telling some poor fucker in Aleppo or Iraq who’s never really known peace that a bad war is coming and don’t be surprised if they either laugh at you or give you a slap (not you personally DB).

What is going on anymore

It doesn’t even mention Russia

Ahh, I knew I had seen it before, just seemed like an apt way to sum up the confusion in Syria

the wogs and the darkies

Obviously in terms of how yr average lil Englander or w/e sees those parts of the world.

Basically whether you like it or not a lot of our current Western liberal hysteria about the end times ignores the fact that the world has always been going badly for most of the global population. It does smack of an unconscious colonial/even racist mindset.