It's finally here! The 'Recommend me a Toaster' thread you've been waiting for!

Hey. So my toaster has died. The last time I bought a toaster was over a decade ago and I think I just went on Amazon and bought whatever was top rated on there. My shopping habits have changed a bit since but I don’t really know where to start with Toaster shopping. So.

How about a nice red one?

My kitchen is green though… It would be like living in a traffic light.

This. Four slice rather than two though. Two slice is a false economy unless you live alone.

We are fine with a 2 one in a house of four. We had a four one and one side broke after about 12 months.

Either buy a really cheap one or a really expensive one. Anything in between is nonsense.

We’ve got a Dualit one which was and is expensive but it’s lasted a family of four nearly 30 years and it’s still going strong.

Proves my point… If that had been a 2 slice then you’d have been left without a usable toaster, instead you can still use half of it and have enough toast.

have you tried the toast office?

Check under “other phrases”

Hello and welcome! The DiS community has been going strong for many (!!!) years, and as with any other community we’ve ended up with our fair share of in-jokes, tribe language and references that in its nature won’t be easy for any newcomers to interpret. Or some long-time posters will just have missed a thread where a specific joke was made that stuck around, and be none the wiser but not wanting to ask, etc. This thread is meant as a way to demystify some of the internal language for new and …

I have this in limestone
I vibe it Dualit's Classic Toasters are hand assembled in the UK from start to finish. The 2 Slice NewGen Toaster features fully replaceable or repairable parts and includes ProHeat elements that have a protective armour plated...

I’ve got the plain steel four slot version of that. Bought it in about 1998 and it’s still going strong. Went wrong once but easily and cheaply fixed. It’s the Don of toasters.

Ah! Been on here since 2006 and no recollection at all of this one!

do love the aesthetics of a dualit. And also the old school timer sound. My mum has one that is probably just slightly younger than me. Don’t think I can bring myself to spend £200 on a toaster though…

We bought a new toaster earlier this year after our old one died.

I wanted something more fancy, but I was vetoed, and we went for this one (which is a fiver cheaper than when I bought it - curses!) 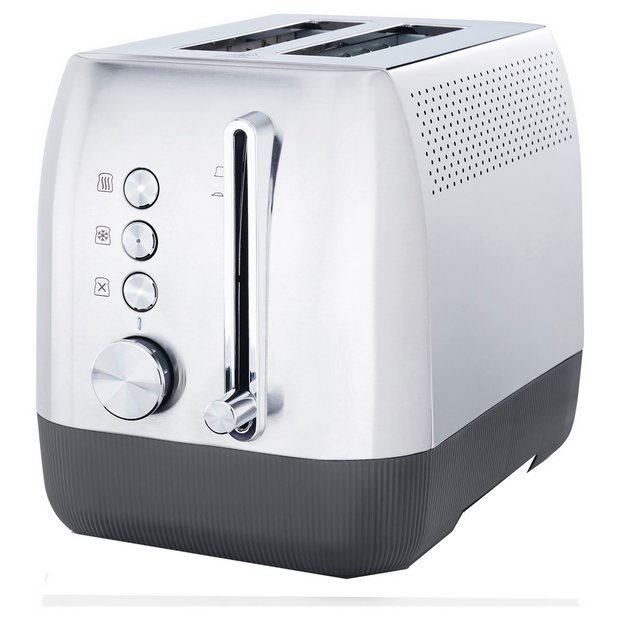 I still have the mail I sent my other half with my toaster research:

Breville - both not bad, but the “Edge” model looks like it’s quite flexible in terms of what bread can be put in it
https://www.currys.co.uk/gbuk/household-appliances/small-kitchen-appliances/toasters/breville-edge-vtt981-2-slice-toaster-brushed-stainless-steel-10225893-pdt.html
https://www.currys.co.uk/gbuk/household-appliances/small-kitchen-appliances/toasters/breville-high-gloss-vtt967-2-slice-toaster-cream-10226106-pdt.html

Tefal Toast & Bean (but as well as beans also does eggs boiled, poached and scrambled!!!)
https://www.currys.co.uk/gbuk/household-appliances/small-kitchen-appliances/toasters/tefal-toast-n-bean-tt552842-2-slice-toaster-black-10207802-pdt.html

I think we should probably get the Bosch one, if we’re being sensible. Although we don’t need to be sensible all the time, and it’s just a toaster - How wrong can you go with a toaster?