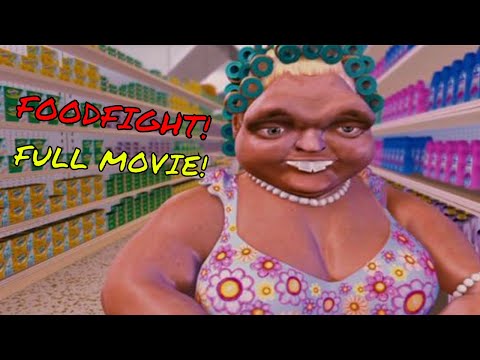 WTF - you can skip to anywhere and it’s absolutely

EDIT : Some sort of Tax Write off I presume.

The Wikipedia page is quite a read, both the production history and the reception Foodfight! is a 2012 American computer-animated adventure comedy film produced by Threshold Entertainment and directed by Lawrence Kasanoff. The film features the voices of Charlie Sheen, Wayne Brady, Hilary Duff, Eva Longoria, Larry Miller, and Christopher Lloyd. Foodfight! takes place in the "Marketropolis" supermarket, which, after closing time, transforms into a city where all the citizens are "Ikes", personified well-known marketing icons. The story follows a cereal brand mascot, Dex Dogt...

The A.V. Club stated, “the grotesque ugliness of the animation alone would be a deal-breaker even if the film weren’t also glaringly inappropriate in its sexuality, nightmare-inducing in its animation, and filled with Nazi overtones and iconography even more egregiously unfit for children than the script’s wall-to-wall gauntlet of crude double entendres and weird intimations of inter-species sex”.

Kate Valentine of Hollywood News called it “by far the crappiest piece of crap I have ever had the misfortune to watch”.

some lovely trivia on imdb

This is fucking wild