Was drinking some beers in front of the telly on Saturday night looking for something to watch, and as I flicked through the options, Jackass 3.5 cropped up. Happy to turn my brain off and have some background stuff on while I scrolled Twitter, I picked it, and I have to say, I can’t remember the last time I laughed so much at a film.

Do you have fond memories of Jackass or I am I just a stunted manbaby?

When they were trying to do the big skateboarding loop thing with Tony Hawk and he did it dressed as a banana.

There is nothing better than pissing about with your mates.

Watching people who are mates pissing about with each other is the closest thing “art” can get to capturing that.

Jackass was a great example of this “art”

can’t remember which one

Watched Jackass 3 the other day with some pals after a night out and had a great time, cheers

Me neither, reckon I’ve only seen the films or maybe bits of the TV show when I was at a mate’s fancy house with Sky

Not sure I find this or the Welsh one funny, but then the highlight of my week is coming home from work on a Friday and watching Fails of the Week on FailArmy so I’m in absolutely no position to judge anyone.

Lads from Dirty Sanchez have a few houses on the beach where I grew up. Did alright for themselves
One of thems a vegan chef or something

Absolutely love it. Was thinking about this stunt just this morning 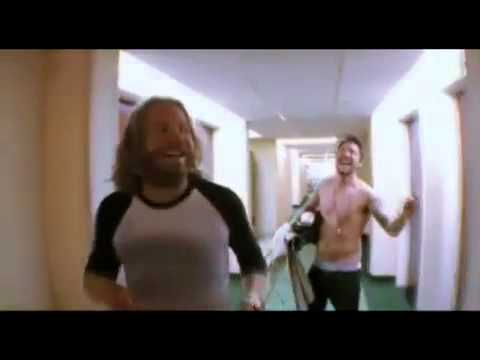 Think this nails it. Explains why people like the May / Clarkson / Hammond Top Gear so much, or the explosion in podcasts where the reason people like them is the hosts having good chemistry.

liked the funny stuff. not into the gross out vomit/shit stuff.

better than the welsh copycats.

I have nothing to back that up, just how he comes across.

Think this nails it. Explains why people like the May / Clarkson / Hammond Top Gear so much, or the explosion in podcasts where the reason people like them is the hosts having good chemistry.

It’s why the early run of Adam McKay comedies hold up beyond their broadness as well. You can tell that Ferrell, Rudd etc are just having a laugh dicking about with their mates.

Rudd and Segal in I Love You Man

The one downbeat part of watching the film was seeing Ryan Dunn, he seemed like a really good dude, it’s proper sad that’s gone.

Bam Margera seemed properly excruciating back in the day and continued to be excruciating in his spin-offs and that.

Yeah, he had slightly bad vibes.

Knoxville has surprisingly good vibes, reckon he’d be good to hang out with.

Remember when Steve-O was dating Stacy Solomon? What the fuck was that about.