Im about to make a cup of camomile tea and play on my switch for an hour or so.

Tomorrow I’d like to do some drawing or painting or something.

Had a horrible day. Want the weekend to come quickly so I can have a big old sleep. Going to watch Below Deck and maybe Are You The One then sleep.

I’ve watched Bake Off and now need to finish the ironing, and do some more work. I can be bothered to do neither of the latter two things.

Had a weird day

Amongst other things I went to see a guy who has been a rock photographer since the 70s and had a look through a tiny part of his archive: unpublished photos of Elton John, Neil Young, Rolling Stones, Led Zep, David Bowie, Fleetwood Mac, George Harrisson, Paul Macartney, Springsteen …loads of others… all from LA in the 70s & early 80s

He was the Stones official photographer for decades, had loads of memorabilia, Gold & Platinum discs, demos of unrealeased stuff (we listened to a bunch of unreleased Bob Marley studio out takes) and he told me a bunch of libelous old war stories from the frontlines including a funny one about Trump throwing his toys out of the pram at a Stones gig back in '82 …which I suppose I could tell if anyone wants to hear it?

I don’t want to work tomorrow. Why didn’t I book the full week off?

Just got an email from Domino’s apologising and saying they’ve refunded me £9 because I clicked the feedback button on the tracker and moaned that delivery was taking over an hour at the weekend.

Watching masterchef while my daughter sits on my lap and noisily fills her nappy.

So, the #SuezCanal is blocked... Massive container ship EVER GIVEN stuck in the most awkward way possible. Ongoing for hours. Every tug Egypt could spare appear to be trying to pull it free. Vessel tracker: vesselfinder.com/?imo=9811000 https://t.co/08w4qpPqln 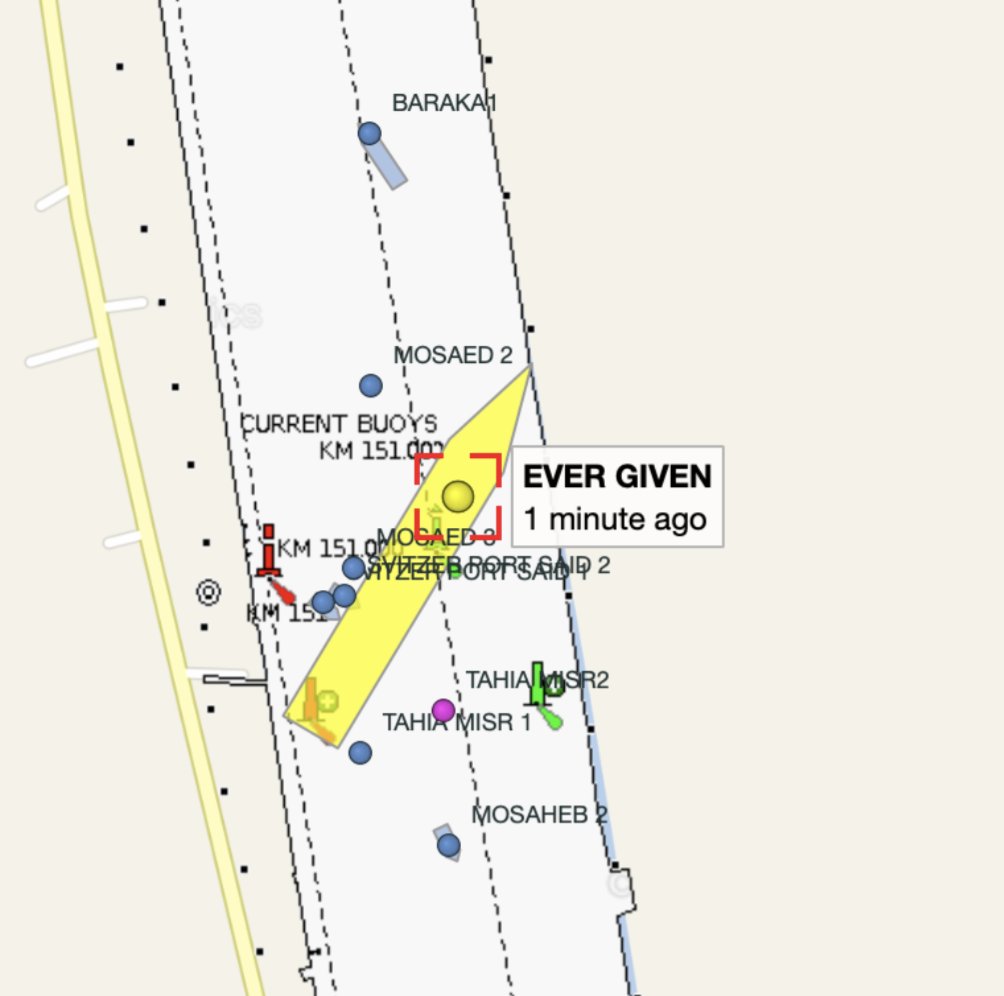 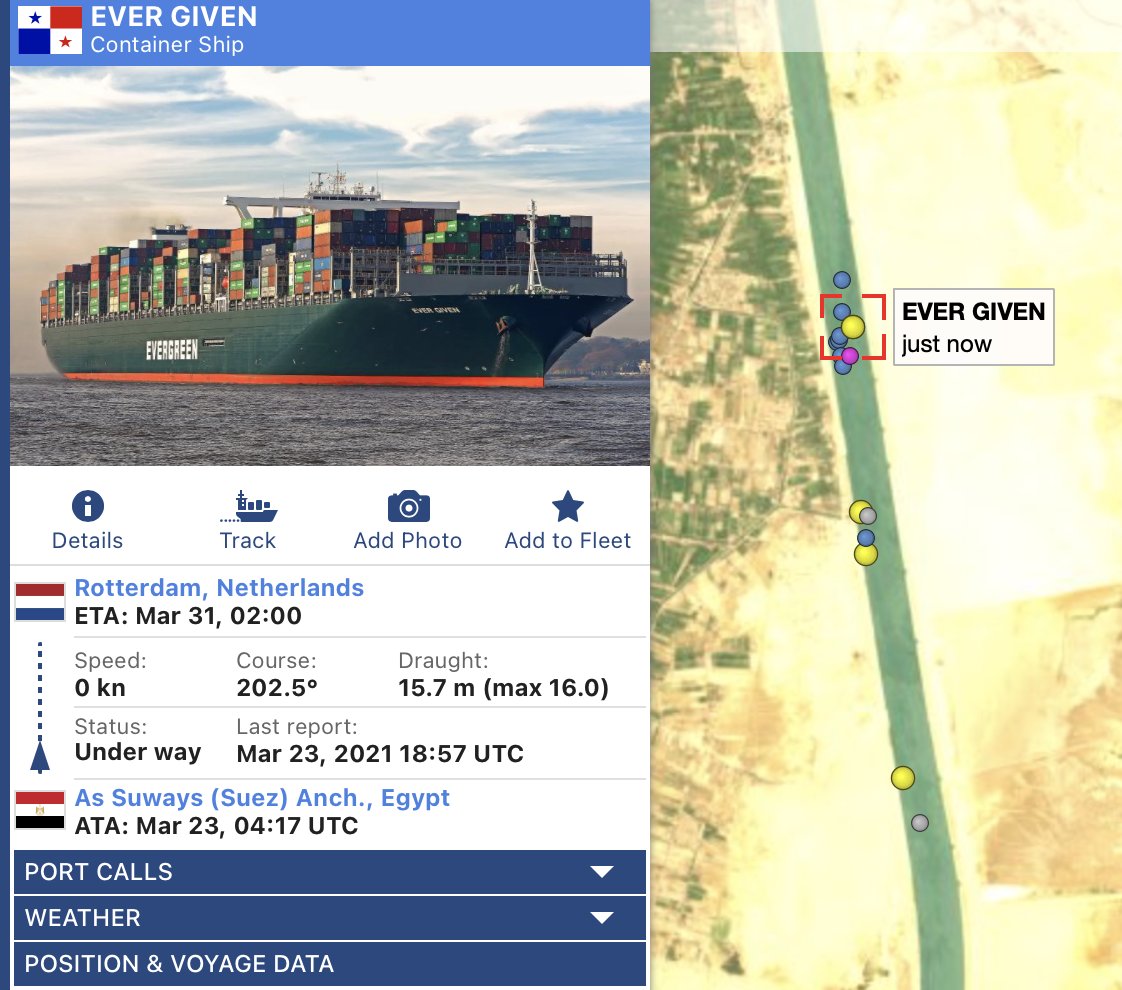 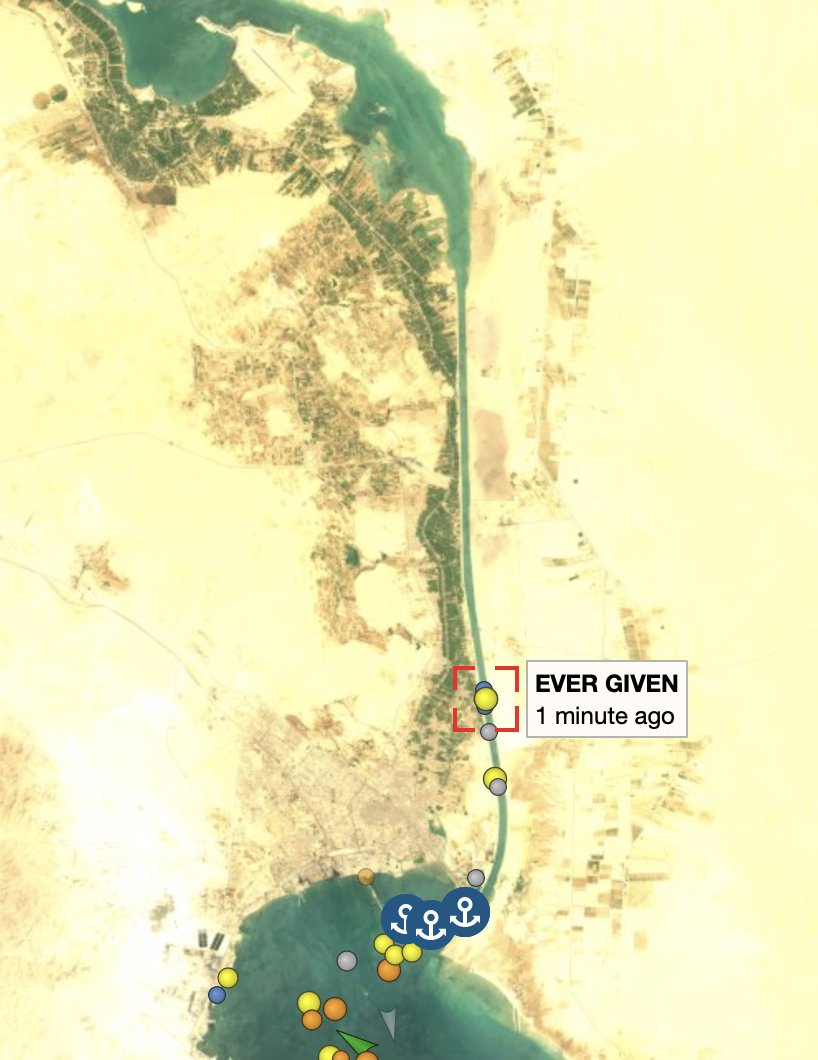 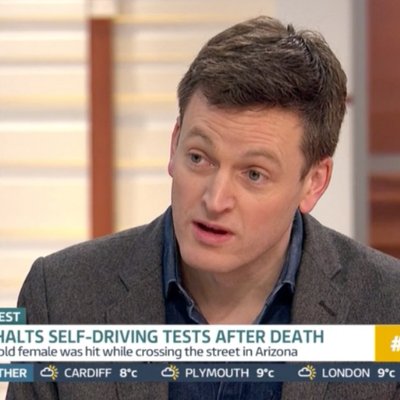 You know that feeling when you stall at the lights and hold up traffic? This is a bit like that. A big boat is stuck in the Suez Canal and the queue is quite something. twitter.com/jsrailton/stat… https://t.co/hSj4oR9AtP 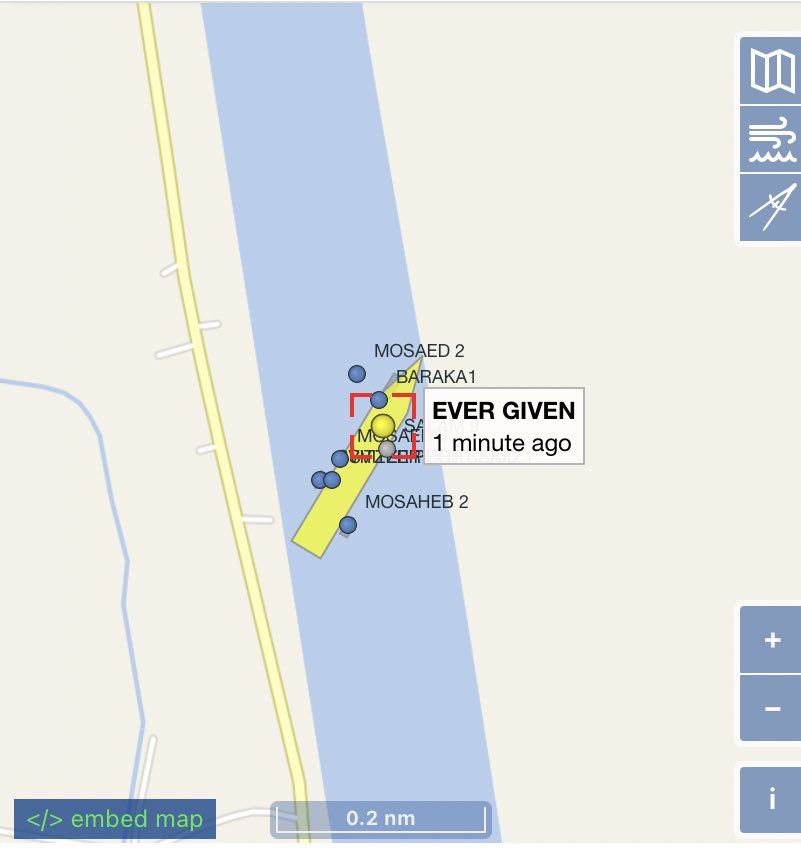 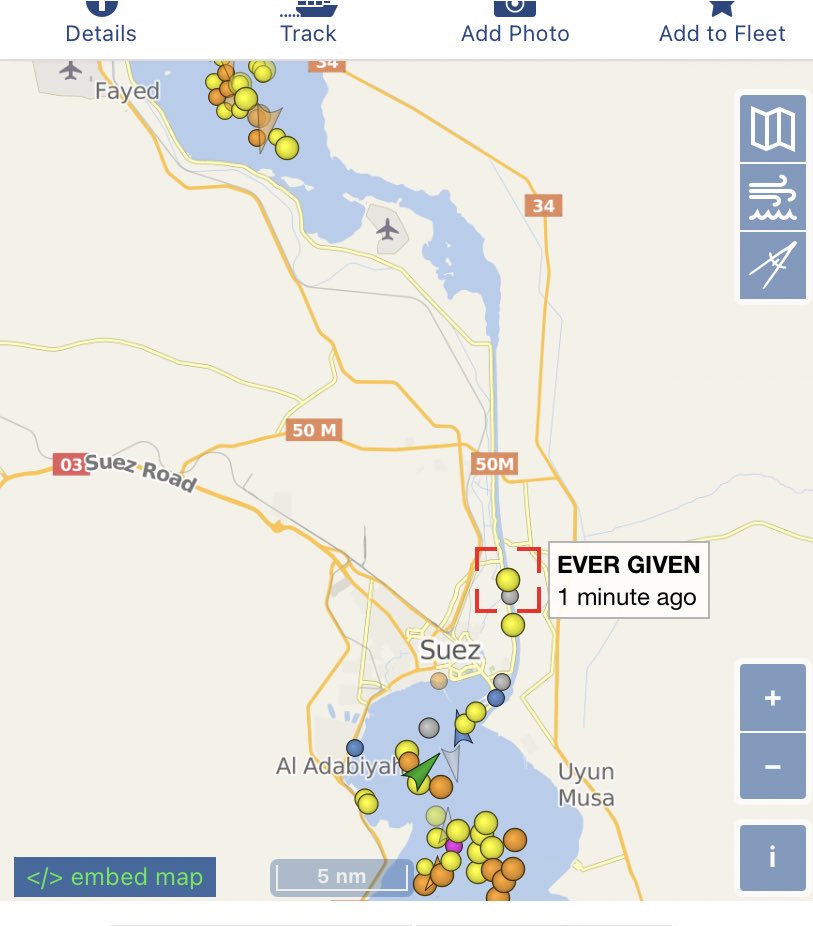 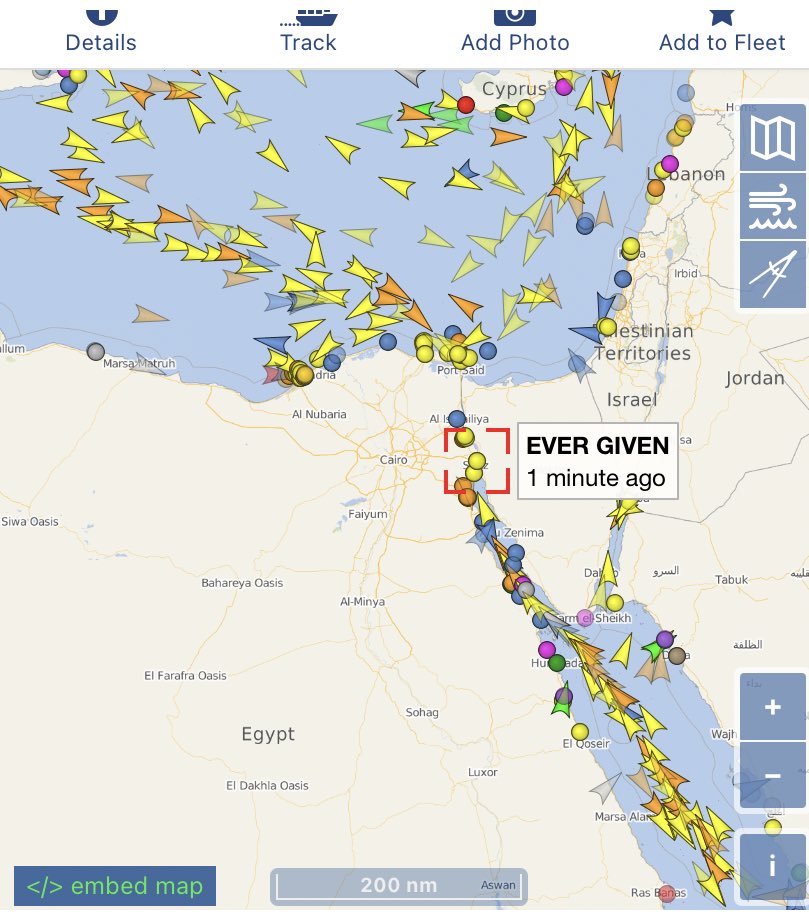 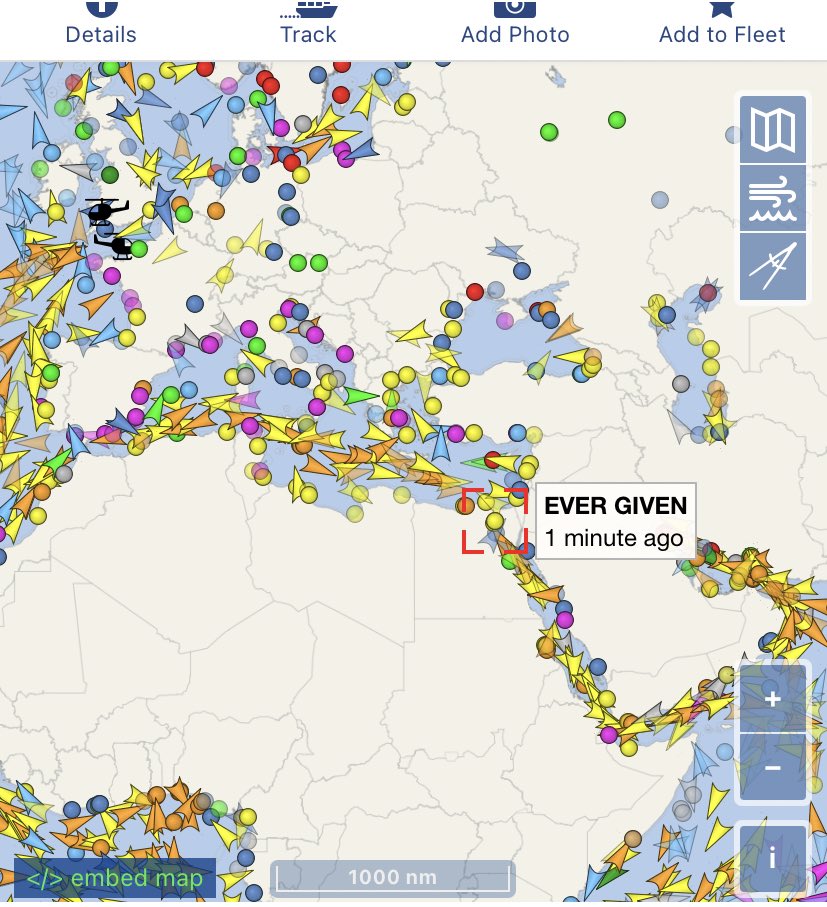 So, the #SuezCanal is blocked... Massive container ship EVER GIVEN stuck in the most awkward way possible. Ongoing for hours. Every tug Egypt could spare appear to be trying to pull it free. Vessel tracker: https://t.co/MsTUgVgyTH https://t.co/08w4qpPqln
4 Likes
1101010 23 March 2021 21:48 #10

This is on Twitter. It looks like the ship in the photos (Evergreen on the side not Ever Given) but I didn’t spot another container ship so close on the satellite. Maybe it’s an optical illusion though.

I can’t believe it’s that narrow

Wonder how that happened. Perhaps it’s some kind of sexy protest

Had a bad day, didn’t eat well either and feel crap as a result. But bedtime now, trying to find something relaxing to read on my phone, bought a bunch of ebooks off of verso books to fill some glaring gaps in my general knowledge, will go for one of those then

I guess it was made in the 30s? Long enough ago that probably it was big compared to the largest ships the British imagined putting through it.

Would be classic Imperial Britain to just look at the size of our biggest battleship and model it around that.

Sorry to hear mate. Yeah a nice relaxing read sounds like a good idea (although I’d probably be reaching for some proper page-turning trash rather than something cool from Verso).

I meant the canal being that narrow! Either way it’s still nuts.

You ever seen the Panama Canal? That is MAD.

now I have, wow