Leeds Festival crowd boo Charli XCX after question about The 1975

The Leeds Fest crowd booed Matt Healy, lead singer of The 1975, after he made a dig at Rage Against The Machine during a sweary tribute to the American rockers

Rumours Ed Sheeran will appear on stage at Leeds Festival 2022

Pulled out of Reading now

Has anyone not been booed?

Rage Against The Machine, presumably

They were saying “Boooo-mbtrack, what a pity we won’t get to hear this song this weekend but we salute you smashing old chappies, The Rages And The Machines”

At Reading for a 21st year. It’s my place, I will always have time here.

@MetroUK
The Arctic Monkeys have requested for the BBC to not premiere their Reading Festival set live this evening. The Alex Turner-fronted Sheffield band are set to perform on the main stage tonight from 9:50pm to 11:20pm. trib.al/gmY1DuL
Roughyed 27 August 2022 18:21 #11

Not really if you are going to be performing tracks off your new album. Loads of people have done it down the years and the media always make some sort of big deal about it and some just make the request anyway.

Went to Leeds in 2002, the eventually ill-fated riot-torn one which led to it being moved from Temple Newsam. Very sad I haven’t really been since (I was 17 twenty years ago… sheesh) but it was actually on the Friday where the Carling dictatorship aside, it mostly seemed pretty friendly and good-natured. Had to go before the dubious pleasure of Buckethead-era Guns N’ Roses but Prodigy were decent, and enjoyed Hell is for Heroes, Incubus, Slipknot with my sister at the top of a big wheel

The “gammy leg” comment is grim though and we all know Matty Healy is a wanker.

It’s probably at least a bit more serious than that, which is why I myself changed the original “Booomb-track” post as I thought it was insensitive. Seriously though, get well soon Zack.

Quietus did a piece on it this week 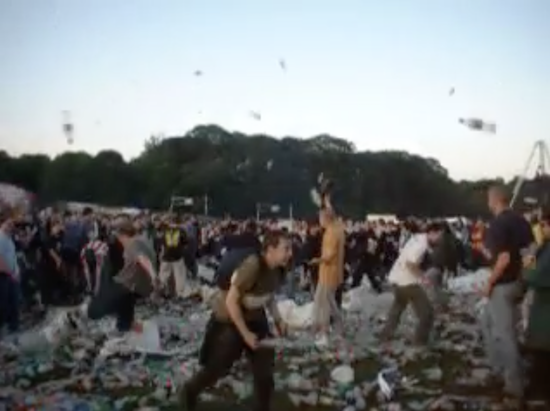 The Carling Weekend was a rite of passage for many youngsters, but JR Moores got more than he bargained for when he attended Leeds Festival in 2002. He recalls police helicopters, burning portaloos and petulant headliners; and asks

I put “gammy leg” because that’s verbatim what he said.

Have edited the post to include quotation marks to better quite him.

Nice to see Wolf Alice on a Reading/Leeds/Glastonbury main stage as it’s getting dark for once.

I was in the field with the riots that year, and I thought 2005 was much more scary, tbh.

My main memories of both years were of sprinting between stages to see bands, as there were so many on the line-ups that I wanted to see.