No, not this time 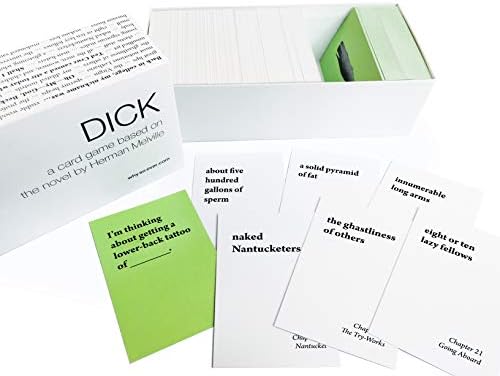 Why So Ever Dick: A Card Game Based on the Novel by Herman Melville: Amazon.co.uk: Toys & Games

There’s a card game for everything these days eh!

Never heard of it

Way ahead of ya!

Might be a line from Moby Dick, dunno, never read it.

Wait until I tell you about the one that’s a simulation of an intimate encounter between a human and a tentacle alien that I recently received.

I don’t want to hear about that

‘Call me Ishmael, I’m way ahead of ya’ is the opening line I think

Too late, that’s about it.

Remember Robert Duvall’s character in Deep Impact started reading it to the guy who went blind in space? Probably one of those endeavours you regret immediately after starting it.

Reckon former West brom striker Ishmael miller’s agent used to text him during the transfer window saying ‘call me, ishmael’ for a laugh?

It would be good. Someone would suggest Moby Dick and would say “I think it’s about a whale or something”, and I would reply “wrong! It’s about obsession” and three people would smugly like my reply.

Would you watch a film adaptation of Moby Dick but at some point that bit from Free Willy where the whale jumps over the boy happens?