Definitely the worst of the singles I’ve heard tbh. Not really rushing to listen to the whole album but sure I’ll get around to it eventually

Quite like Green Light, I mean the opening I can take or leave but the actual song doesn’t feel like it’s a million miles away from the sort of electro/dance-pop sound Robyn was getting mad props for.

does anyone know what time headliners usually come on stage at the Alexandra Palace? I can’t find anything for recent gigs there apart from doors open at 18.30 and show at 19.00.

LCD Soundsystem were on at 9 on Friday, no idea if there’s a “standard” though sorry!

Thanks! I was thinking 9 is probably right given curfew is 11.

Albums growing on me lots fwiw. Couple cringe moments but other than that she’s cracking.

Anyone going to the tour this/next week? My first concert since June and the album’s great so I’m fairly psyched. If it’s even half as good as the Glastonbury set looked it’ll be money well spent.

Sunday in Birmingham was excellent, a run of Supercut, Royals, Perfect Places, Team and Green Light is pretty phenomenal.

Looks like America will be getting some great shows too 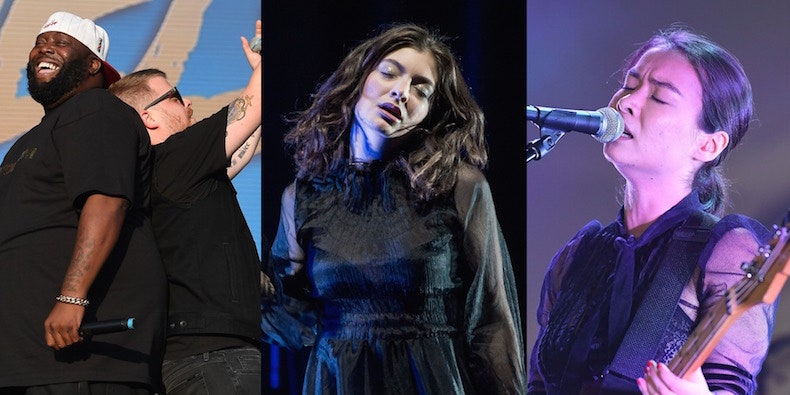 Run the Jewels and Mitski Touring With Lorde

Those kids are gonna get exposed to some great tunes, imagining Miski busting out “Happy” now…

I went to the Brighton show and had a great time. Fortunately, I picked the right time to duck out for a pint and piss as it turned out I missed an inspiration monologue clearly aimed at the wee kiddies which probably went on for way too long as I was able to achieve both and still catch the end of it. [But it meant I didnt miss a single song]

Great time otherwise, plenty of dancing was had during that final stretch annnnnd I’m so thrilled that she came out to do a one song encore, and that one song was ‘Loveless’ which I thought wasn’t going to happen… though its a pretty underwhelming song to end the set with alone

Yeah the inspiration monologue was pure cringe, especially as it tries to come across as really heartfelt but I saw her do an almost identical, over-long monologue to start the same song at Glastonbury, presumably meaning that she’s done the same speech at the same point at every show since

Can’t argue with the tunes though. She’s had almost a greatest hits worth of bangers in the space of 2 albums

Cringe for a good cause though surely

What do you mean?

A young talented “independent” female musician giving a speech designed to inspire others young people/women to succeed? Seems like a worthwhile cause even if it is cringy

This album is so fucking good. Between this, Haim and Paramore, it’s been a fucking great year for vaguely indie-ish lady-pop. Somehow completely missed the tour and am utterly gutted.

I can only hope so

It is the CLEAR AotY, guys. It would actually be a perfect album if the horrible vocal recording didn’t wreck it.

May I point you in the direction of Fazerdaze? Another NZ artist who fits that description and put out a pretty decent album this year.

horrible how? Lorde was on Song Exploder recently and talked about how they recorded some of the vox with this producer who exclusively does vocals, so it’s interesting that they’re a problem for you