Answers provided with a picture to solve this appreciated.

A1 the cost of connecting a call.

Can this be answered with a picture on the graph?

I don’t understand. You could enlarge the point at which the line crosses the Y-axis, I guess.

Oh, do you mean, why would this be the case? As @carstuckindrive says, there’s a one-off, minimum, charge for connecting the call (the intercept), then a per minute rate beyond that (the gradient).

Never my best subject, thanks for the replies.

On second looking at it I think it is 50p!

Can this be answered with a picture on the graph?

Closest thing I can think of that would fit this would be to draw dimension lines measuring along for an x value and up for a y value (ending up with a right angled triangle under or over the given plotted line) to show where you’re getting your values from for calculating gradient (m) = change in y ÷ change in x.

And maybe a horizontal line across from the y-axis intercept labelled c=0.5. 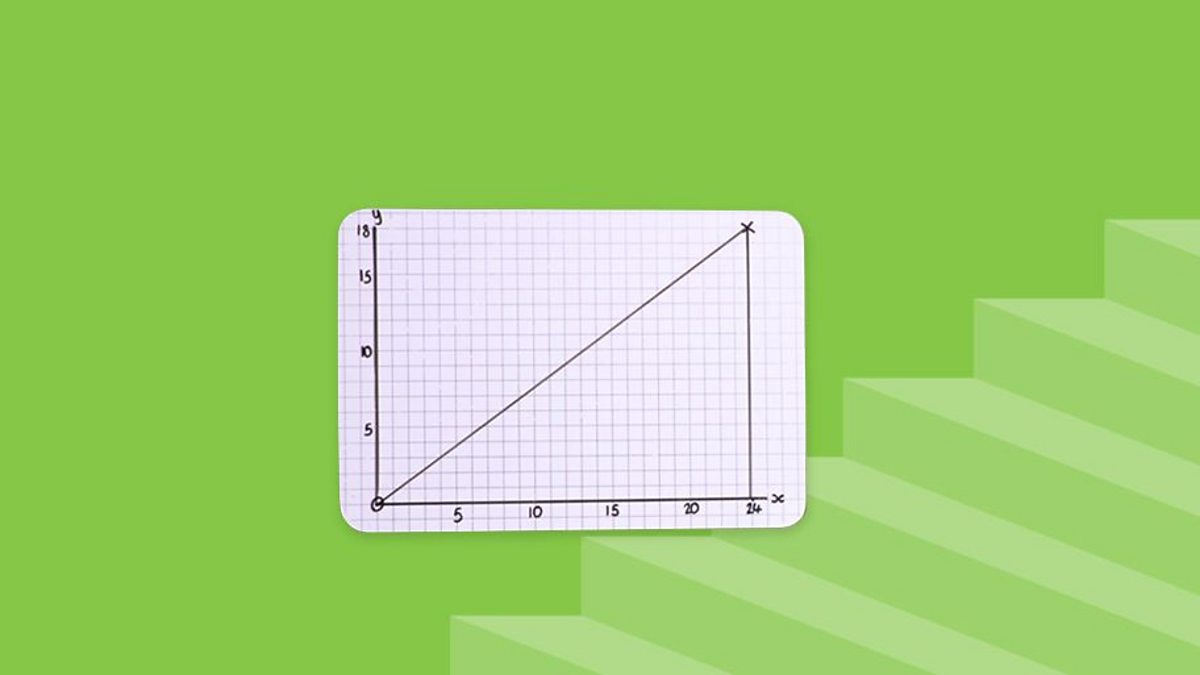 How to work out the gradient of a straight line

The gradient is how steep an incline is. Find out how to calculate it in this Bitesize maths video for KS3.

In the question, “Give an interpretation of…” is a needlessly complicated way saying “What is the…”.

And part (b) of the question is needless repetition.

Also, fuck that graph for not having labels on the axes (or a title). Putting the “£y for x minutes” text underneath is no excuse.

A very irksome way of testing the understanding of a concept, this.

My brain isn’t up to this.

The fact every number of the Y-Axis is half the number on the X-Axis (i.e. the X-axis is counting 1cm at a time while the Y-Axis is counting every 0.5cm or something like that) has already made it melt and dribble out of my ears. Gradient seems to therefore be 6/8 not 6/4 since it’s a reflection of equal measurements not numbers. Or does that make this logarithmic?

No neither scale is logarithmic, they are both linear.

Yes the scaling and labelling on the graph are both poor and needlessly confusing.

I reckon the fact that the scales are similar (only half/double each other) and covering a similar range (neither reaching more than single figures) is what makes it fiddly/confusing. Your brain is tempted toward instinctual remembered shortcuts rather than going by the step by step method through the maths of it.

Almost becomes a trick rather than a test of understanding.

It’d be less odd-seeming if the x axis were measuring something other than phone call duration and covered a range of 0-500 days, for example.

Going by the BBC Bitesize page, this is Key Stage 3, 11 to 14 year-olds. Seems like a completely reasonable concept for them to take on. But the presentation and communication in that question is awful.

Especially that “Give an interpretation of…” bit. Infuriating. Sounds more like a philosophy question. Just bloody ask what it is you want to know. Like “What is the fixed cost, in pence, shown on the y-axis, that applies to all calls made before any time has elapsed.” Something like that.

But the presentation and communication in that question is awful.

TBH I hope a lot of that is because teachers are given a syllabus that includes teaching concepts certain ways and, in theory at least, the papers and exams should be checking if you learned the ways.

I remember at A-Level looking at some late 80s past papers for our board. The questions were really hard but part of that was they were just asking questions in a way we hadn’t been asked to.

I remember there was a general thing with some teachers claiming it was just the exams had got easier but others said it was all the same concepts it was just the approach that changed.

Especially that “Give an interpretation of…” bit. Infuriating. Sounds more like a philosophy question. Just bloody ask what it is you want to know. Like “What is the fixed cost, in pence, shown on the y-axis, that applies to all calls made before any time has elapsed.” Something like that.

I guess the devil’s advocate answer to this is it gives scope for flexibility when reading the answers. Would really need to see the marking notes to work out what’s going on there. Also I think a key part of the question there is identifying that the intercept is a fixed cost, rather than simply asking how much it is.