They make themed Monopoly for any fucking thing don’t they?

Amazing marketing on whoever came up with themed Monopoly.

Have you ever received one? Did you even unwrap it or send it straight to the chazza shazza?

Look at this pile of shit: https://monopoly.wikia.com/wiki/List_of_Monopoly_Games_(Board)

Who the fuck even is Dale Earnhardt?

I was on a date once and we were in the National Museum, Cardiff. As we left and walked past the gift shop window, Gareth, for that was his name pointed at a Cardiff version of Monopoly and we had a brief chat about it. Then came his immortal yet innocent comment, “a London version would be pretty good”. That was our last date.

Dale Earnhardt is NASCAR isn’t he? Think there’s a Jr version of him too.

Yeah it’s no [name of penoid board game]

Does anyone have a monopoly strategy? Mine is to buy any property I land on where possible, then basically let the game play out until finished. NEVER get involved with trades or anything like that with other players. Ideally you shouldn’t even speak to them.

Would you prefer to play Monopoly

Monopoly - minor ailments edition. Featuring all your favourite ailments such a Mouth Ulcer and Burnt Finger

whatever gets the whole shitshow over as quickly as possible

Monopoly: Monopoly Theme Edition. Where every space you land on is a themed version of Monopoly and if you win that, you can purchase that property.

My sister went through a long spell of collecting Monopoly sets in the late 90s. 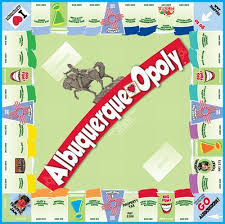 Albuquerque-opoly is a Late for the Sky version of the classic boardgame, featuring Albuquerque, New Mexico. "A board game about the GREAT city of Albuquerque!" "We chose some favorite landmarks and traditions, mixed in some hot air balloons, Native...

sean should licence a DiS one