I killed a… lizard badger

Is there a way to lock on to a monster???

Is there a way to lock on to a monster???

Good question… I’m sure it said to click in the R joystick to target a monster, but doesn’t seem to do anything

I’m pretty confused (information overload), but having a lot of fun. I forged a new weapon, and taken it out… To forage for mushrooms.

I’m wondering if the targeting only works on the big monsters rather than the endemic wildlife?

Think that might be it. Not taken on any big 'uns yet! 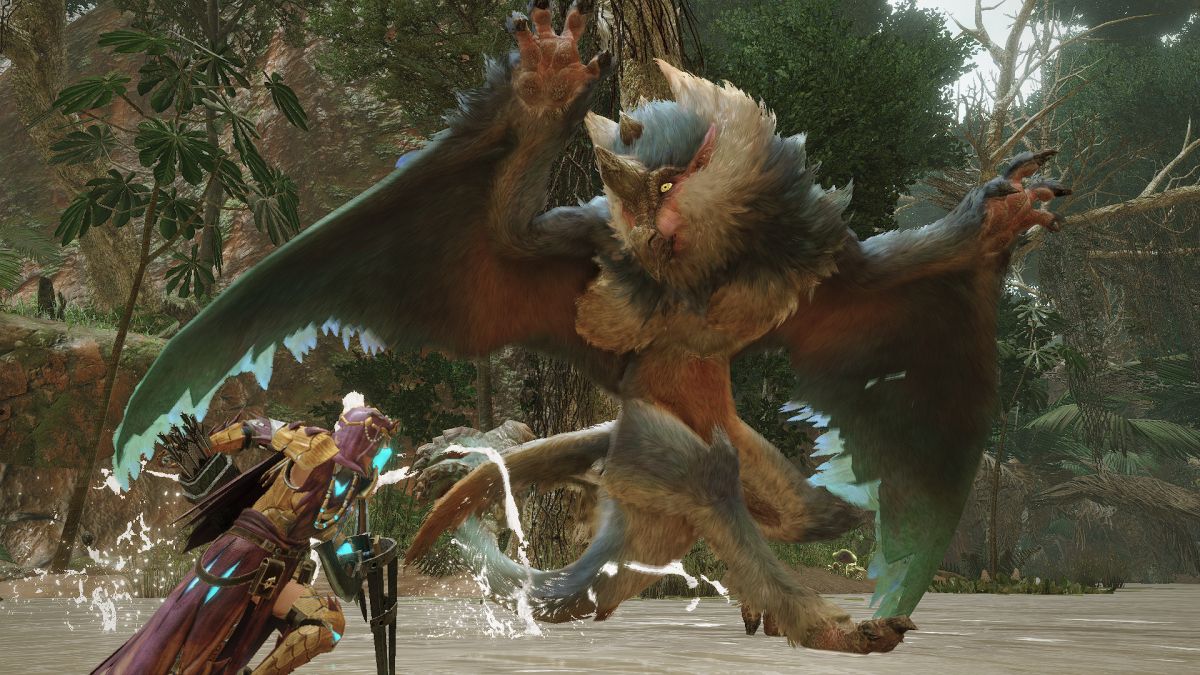 Getting to grips with the wirebugs now. Loving how you can use them to traverse things. Had no idea you climb up everything when I was playing the demo. Alright, think the combat is clicking a bit more now. There’s a good Polygon article on the different weapon types, and I whacked the training dummy a bit with the ones that looked interesting. The Hunters Notes for each weapon are really really useful.

Settled on sword and shield for now, which I’d assumed would be mega boring, but it’s not.

Did more of the demo, the first monster and a go at the second. Still don’t really get it. Find monster. Whack it. It runs off. Chase it. Whack it some more. As twisted as it seems, I feel like it would benefit from seeing the monster take more damage and react, rather than just going through the usual phases for ages.

I’m sure there’s tonnes of depths in the foraging / crafting etc, but all in all, not for me, Clive. I liked riding the dog though.

This is pretty much how I felt after rinsing the demo. What was either missing or I overlooked was that the combat is actually much more involved than it seems at first, due to various combos and unique aspects to each weapon that are covered in the Hunters Notes bit.

Plus, yeah, all the other non-combat stuff. In the full game the gathering and stuff is more structured due to various side quests and things, plus the core loop is getting materials to get better gear ad infinitum, which appeals to the part of my brain that likes Diablo and that.

So on that basis I don’t think the demo does a very good job of showing off why it’s fun. Fair enough if it’s not for you, obvs

The crafting system in this is so good. Don’t have the prerequisite part crafted already? No problem you can do that as part of crafting the next stage. Bliss. Animal Crossing take notes.

Just did the Arzuros and feel quite chuffed about capturing it rather than killing it.

Had absolutely no success trying to Wyvern ride it though.

Do feel like I am getting my head around the systems. Am using the dual swords at the moment and they’re a little button mashy, gonna start branching out soon.

I need two more Great Izuchi Hides so my trousers match the rest of my outfit.

I see how it gets you.

I can make new outfits for Muffin and Tomothy?!

Just took down an aknosom after a disastrous first attempt. Had been using the switch axe, which seems pretty ace, but will prob come back to it when I’ve got my head around things more. Really enjoying the hammer now - makes a massive difference looking at the Hunter’s notes and having a practice. Also like accidentally running into another big monster and wyvern riding it into my prey.

Just discovered if there’s something you want to craft but don’t have all the parts, you can register it to your wishlist + it will notify you when you’ve got everything. This is good, I don’t have to remember so much stuff!

I can send my animal pals away on international trading junkets in a submarine that looks like an angler fish?!

Feel like i get the combat more after beating Arzuros (I hope that’s right as I did look it up). That should be the first one you have to kill as it’s moves are really easy to learn and dodge.

Using the longsword at the moment. The one thing I don’t like is how much time I spend swinging and missing as I’m not facing the monster directly, particularly on the smaller monsters where you can’t lock on (I don’t think?) and lining them up is hard as they’re so small. If locking on could work like Dark Souls it would be much better.