And Slim Charles had a minor bit in the pilot

Ha ha, It’s either said angrily in an argument or solemnly to explain some behaviour.

Looking forward to this. Might get now TV to watch it or just torrent it I guess

Watched ep 1 last night. It is heavily stylised in quite a cliche way (the title sequence made me cringe) but it is very good regardless. You get the sense he’s maybe had to make a couple of compromises to get it made (both franco and gyllenhaal are credited as execs) but otherwise all the good david simon stuff is present. Hoping it’ll get better as it goes too.

The young girl who was also in show me a hero is really good, glad she’s back.

All those prosthetic willies look ridiculous.

haha the cocks were like Nicholson in The Departed

Just watched the second and third episodes, I’m completely enamoured by this show.

It’s so wonderfully paced, every scene has room to breathe but it’s never boring even though there haven’t really been any set piece moments thus far. The way the characters are slowly entering each other’s orbit is really enjoyable and I’m having fun imagining how they’re going to interact. New York City is an ace setting too, you get a great feel for the time period.

James Franco is surprisingly good in this, he really comes in to his own in the second and third episodes and I like how they’re playing around with shooting the twin stuff (Vince having a line of Frankie’s fist was good). Favourite characters so far are Maggie Gyllenhaal and Darlene.

Only issue so far is the college dropout, she doesn’t look anywhere near 19 and she’s quite irritating. Also found it hard to follow Frank Sobotka’s plot line, but I have faith all these things will be resolved.

Only issue so far is the college dropout

Bloody hell fuckos, this show is spectacular. I think that was the best episode yet. Maggie Gyllenhaal’s performance is one of the finest I think I have ever seen on television. Her and Method Man both brought their A game to that scene, I didn’t realise he could be so great either.

The richness of every scene is astounding, the acting, the pace, the shots, the costumes, the music, and of course, the writing. Everything is coming together brilliantly. Quite enjoyed Daphne just using her trip home as an opportunity to recruit more ‘models’. Take that Abby!

Been torrenting but think I might buy the bluray when it’s out so they keep making the show.

Yeah I’m loving this so far.

Is there going to be a point of there being 2 James Francos in it at some point d’you reckon? Frankie’s character isn’t fleshed out at all other than being ‘Vinnie’s pain in the ass brother’. Ok so far but it’s not really bringing much to the table.

The actress who plays Abby is 37 years old.

You’d think as a mature student she’d be taking her studies more seriously.

“We’re gonna call it a masterbatorium”
&
“you know, so they can jerk off in there”

This is really good now.

Her and Method Man both brought their A game to that scene, I didn’t realise he could be so great either.

Yeah, I posted that in the TV thread. Didn’t think he had it in him.

Season 2 started last night. Just watched and it’s STILL GOOD + looks like it might feature some rad trade union action from from Abby

Need to go back to this. Think I watched the first two or three but missed the rest.

Not for me Clive 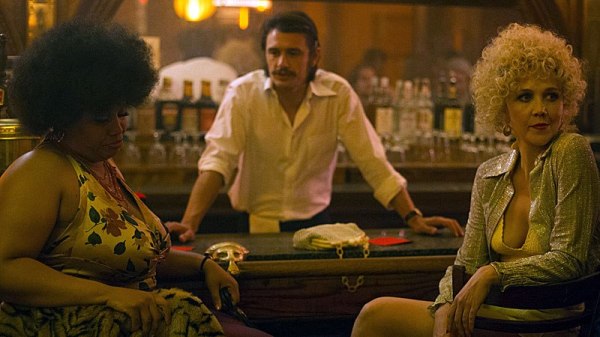 Two episode into The Deuce’s sophomore run on HBO, the premium cable network has renewed it for a third and has set an end date. Season 3 will be the period drama’ final installment. Cr…