So do The Darkness…

Very excited to hear what Billy Woods’ second album of 2019 is like (the first may well be my AOTY at the moment). L’Orange and Jeremiah Jae’s new collab is sounding pretty damn good too. Oh and I guess Danny Brown has a new one out as well. Not a bad day for hip hop when his new record is in third place on my most-excited-to-hear list.

It’s been a while since I really fell for a Boris album but I’ll dive into that at some point too. Also my mate it putting John on next week so I’ll have to brave that unsearchable name and find out what they’re all about.

Got Nick Cave (maybe listen later after work, feels like something I want to pay attention to), Angel Olsen, Boris and Carla dal Forno.

Also, this was nice to see this morning.

@xdannyxbrownx
Your new album is so beautiful congratulations ready whenever you are I’d be honored your so amazing ❤️❤️❤️ twitter.com/AngelOlsen/sta…

@xdannyxbrownx dear Danny. It is I, Angel. Where you been? Happy release day to the both of us. My tour manager picked you up in my Subaru in Asheville and it’s the closest I’ve gotten to you. It’s time to collaborate. The time is nigh.
14 Likes
Kovacs77 4 October 2019 07:49 #29

New Gatecreeper is pretty damn good for those who like things a bit heavier. Riffy, doomy thrash.

all of the above & Wilco.

Oh shit I almost forgot there’s a new record by worriedaboutsatan out as well! Good lord it’s a busy day.

Had to turn that Nick Cave album off after 4 songs. Christ that is boring

today is all about The Menzingers and Bayside for me. The Menzingers album I’ve had for a few weeks but in PR Stream Quality so it’s good to finally hear it ‘properly’ (although sadly it does also mean the weird vocal production has been confirmed as a choice and not a problem with Promojukebox).

Bayside probably aren’t a very DiS band but they’ve putting out reliably catchy pop-rock for almost 20 years and have unexpectedly dropped an album chock full of 80s metal riffs and solos, and I’m loving it.

Today I will be mostly listening to…

And
Jemma Freeman & The Comic Something

Urge you all to listen to this. Jemma is incredible. Psych / spacey / garage rock but poppy as hell too and just so, so tight

Busy day. I have

We Lost the Sea

Just finished listening to this and on first listen, it was just ok. Nothing close to Departure Songs

My god this Nick Cave album is absolutely unbelievable. He’s operating on a transcendent plane of brilliance these days.

That song Waiting for You. Just wonderful.

Oof I’m not in the mood for this today either

I will be trying to cram Nick Cave, Angel Olsen, Wilco into my day before I go to work. Also very excited for the Minor Pieces album: 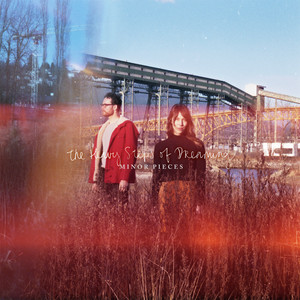 The Heavy Steps Of Dreaming

Yeah, just got to Waiting for You, very beautiful. My fave Nick Cave has been the last two albums, so enjoy the more floaty songs, this is really doing it for me up to now.

Stunning isn’t it? I can’t quite take it all in. It’s like it’s not quite real. Incredible record, but going to need a long time with it.

For all the rockers there’s a new The Wildhearts EP out today called Diagnosis.
Lead track is from their LP from earlier this year plus 5 brand new songs.