Really hope this isn’t true. Crossing my fingers for you.

Well, we're not quite sure what to say about this one... DHFC have been fined £8000 and given a suspended 8 point deduction for failure to fulfil fixtures when the funded stopped and we were awaiting the decision to null and void the season. Thanks, @TheVanaramaNL #DHFC💖💙 https://t.co/1Ef8I9fWtg 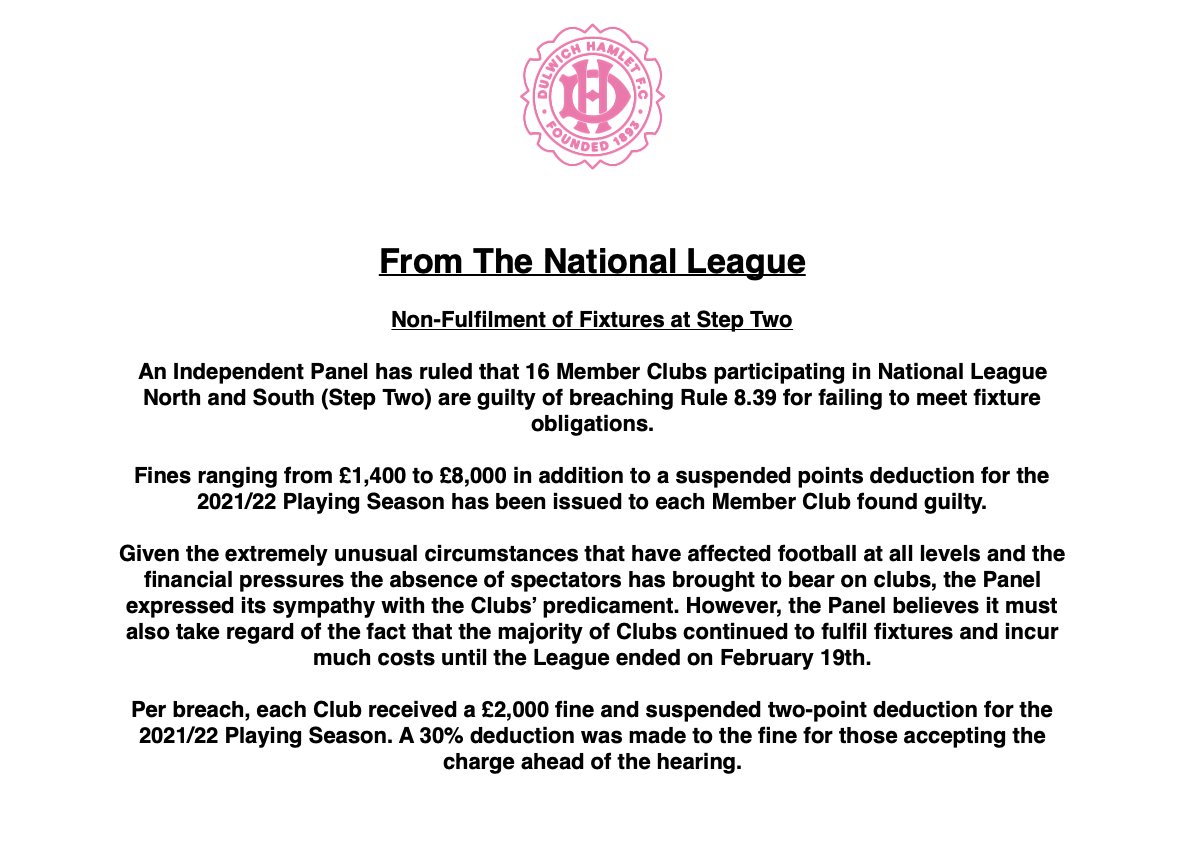 Yeah, scandalous but sadly no surprise. I think I read 14 clubs have received fines ranging from £1400 to £2000 for not playing matches that have since been declared null and void. All because they were apparently promised funding in the form of government grants rather than loans by the League, something which the DCMS refute.

Think the FA will be inundated with appeals, not sure how much good that’ll do, but clubs are moving a motion of no confidence in the National League management early next week.

It’s an impressive achievement to royally piss off every single member club at Step 2, but they’ve managed it.

Massive change is needed there.

I’m so relieved the Angels reluctantly carried out all our matches (when they weren’t called off from positive tests…).

Ollie Bayliss is patiently jumping through hoops to try to get the minutes of that DCMS meeting published, to see whether it was said to be a grant or a loan. Sounds like it’s going to turn into a legal battle.

A good summary of the whole thing

The National League: From Despair to… Where? | Twohundredpercent

Bumping this for the reshuffle confirmed this week. Anyone’s teams affected? West Didsbury & Chorlton were next in line to move up but I’m happy to have a season of going for promotion in the North West Counties Div1 South. Slightly annoying that all the additions (Rocester, Stafford and Wem) are miles away but at least Stafford is easy to get to by train.

Macclesfield Football Club have gone into the North West Counties Premier. I wouldn’t have minded them being in Div1 South for personal reasons but I think season ticket sales must’ve dictated them being a bit higher. I imagine they’ll still be pretty big fish in that pond as the interest seems higher than it was for the last two seasons in League Two. 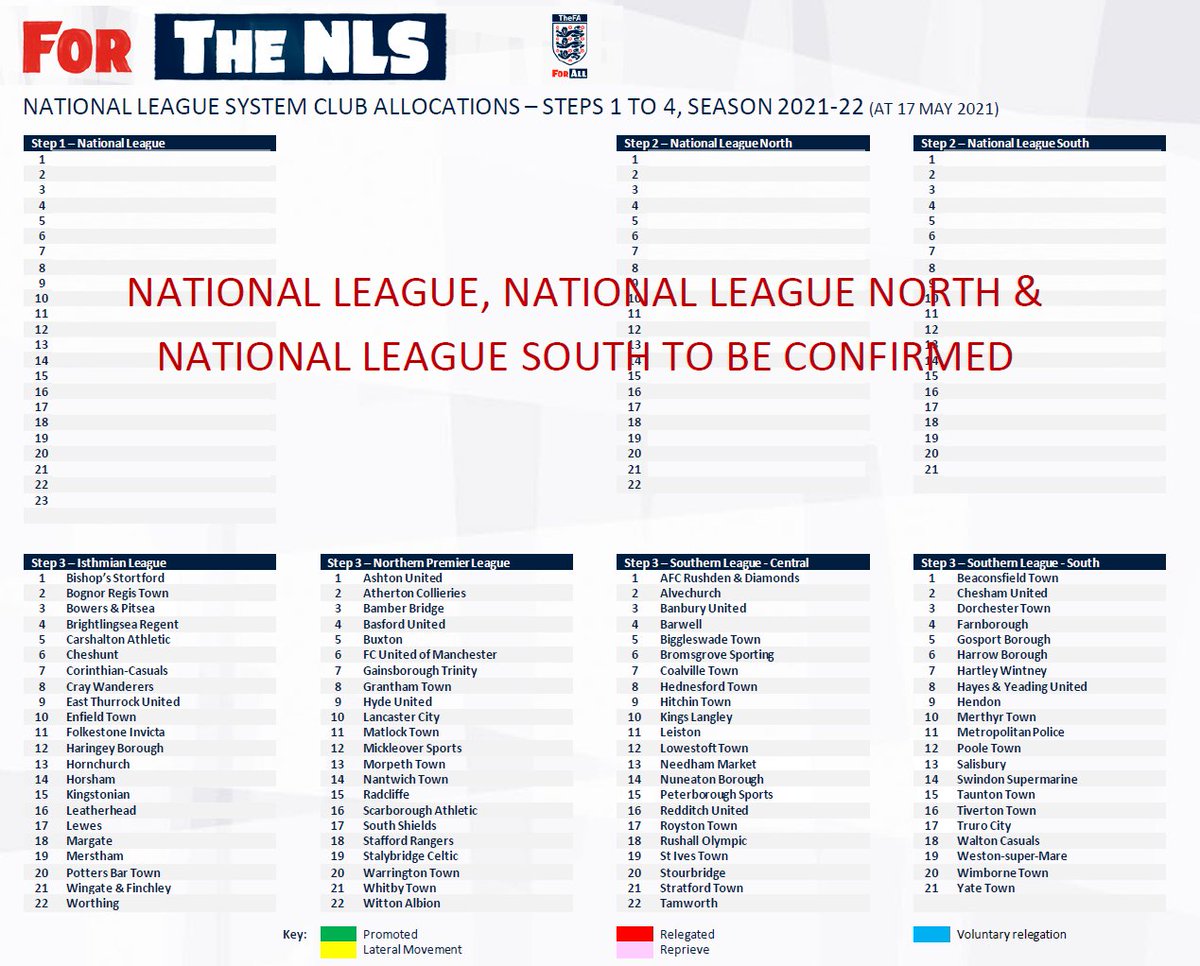 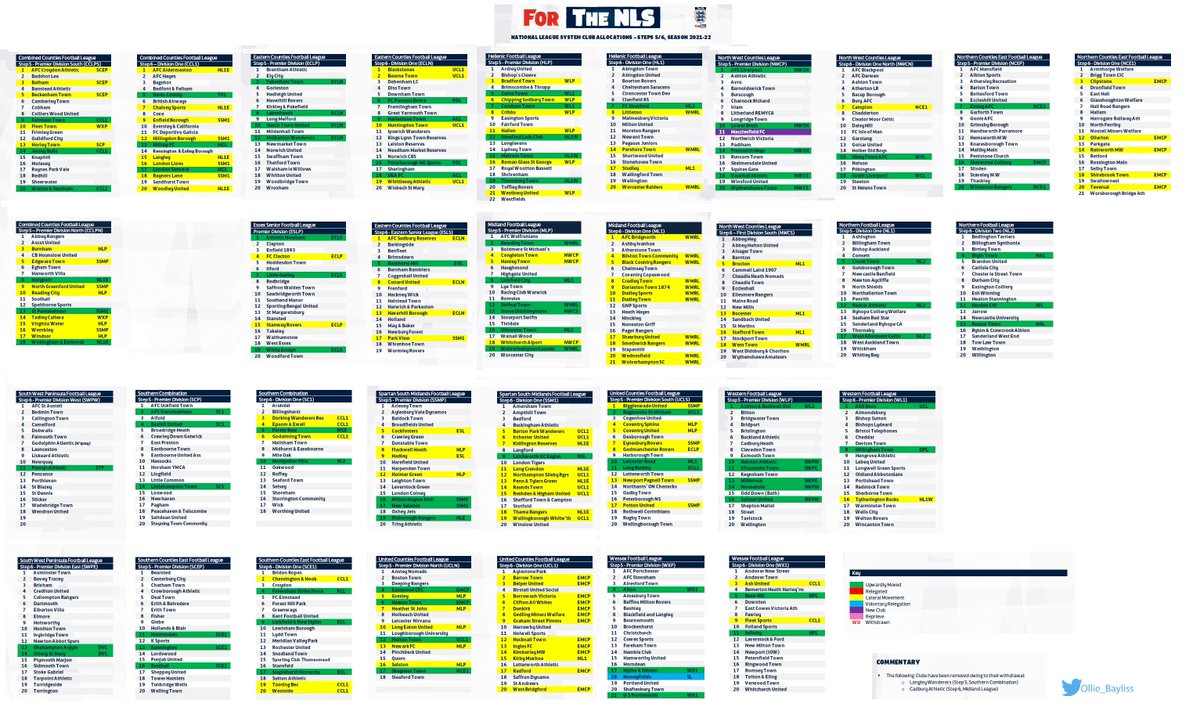 Only change in our division is the return of Merthyr Town, who sat out what there was of last season. Still one short.

Didn’t realise Moneyfields had opted to drop to Step 5. Some quite intriguing moves from Isthmian to Southern at Step 4 and vice-versa.

Whyteleafe have moved from the Isthmian South East to the South Central.

It means they get to play their main local rivals Chipstead again, but teams are more Surrey and London based (as well as Guernsey), previously most teams were Kent based. They are also in the same league as Tooting and Mitcham now too, i presume they recently got relegated?

I think Tooting went down in 2017/8. They might have got into the play-offs the following year, can’t remember, but then there’s been the two non-seasons.

National League playoffs will still be going on after the Euros start! Look quite tasty, Bromley the only club who’ve never played filty League football.

We seem to have made an enemy of Wrexham, so it was fun to see them miss out on the playoffs

Any Clapton fans on here?

Playing at fc united 7th August. Double header with women’s and men’s teams both playing each other

Somehow, 20/21 non-league football is still happening! Who do we want to win the National League playoffs then?

Just seen @ynot that Whyteleafe have resigned from the Isthmian South Central League for next season.

The new landlords, Singapore based property developers have activated a break clause to terminate the club’s lease on the ground on 31st July.

Not good news for the club’s future at all. Once again a community asset is being stripped bare for development.

It always looked bleak when the ground was brought for so much money. I imagine flats and housing will now be built on it. I do know one of the local councillors quite well, so might pop them an email and find out.

Abingdon Town whose ground is also owned by Irama. Have been forced to resign from their league as well. 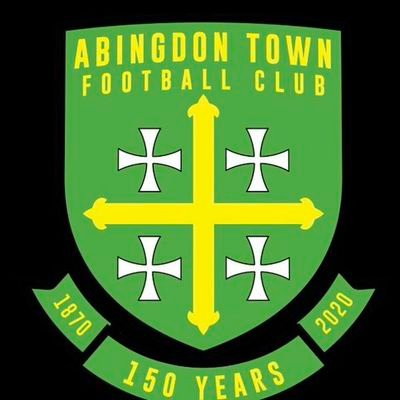 @theabbotts_1870
1/4 It is with deep regret and sadness that we have informed the Hellenic League that Abingdon Town FC will not be playing in next seasons Hellenic League. The club has been forced to give up its Step 6 status after new owners of Culham Road were unable to negotiate a new lease
he_2 14 June 2021 21:19 #762

As you rightly point out, that statement would have far more credibility of they hadn’t forced another club our of their ground too.

You’d hope that having someone like Ian Rush involved that he’d intervene in this absolute travesty.