Seems optimistic to have a phoenix club ready for this season.

The latest on Whytelafe, from the Whyteleafe Facebook page, which is run by fans and not the club.

This is how I see the situation now. There appears to be a stalemate between Irama and WFC with the former saying we’ve offered WFC a lease with a 50% discount on rent and WFC denying this and saying they’ve been refused a lease hence WFC resigning from the league.

It seems to me Irama are dealing with a WFC1 (Chairman & Trustees) and a WFC2 (Youth & Women). The Irama detractors may well see this as a classic divide and conquer approach.

So Irama are firing off nasty emails to WFC1 through their lawyers making unreasonable demands but equally they are being reasonable and accommodating to WFC2. A good number of WFC2 people were actually on the WFC committee and so is it unreasonable for Irama to deal with them directly or vice versa?

For me, if we want 1st team football at Church Road then there seems no alternative but to support the aims of WFC2. They trying to negotiate a place at Step 6 and I don’t know what the chances of successfully achieving this is (for the record WFC have been playing at Step 4). Failing that there’s apparently an option to join the Surrey Elite Intermediate League at Step 8(?) with the possible option of applying for a Step 6 league for 2022/23. By not playing in 2021/22 we run the risk of losing an “oven-ready” team, the momentum and everything fizzling out.

I’m unclear to why the Isthmian League issued a statement saying a place will be held open for them (at Step 4) unless they see WFC2 taking over the existing club from WFC1. By doing this they run the risk of running into significant debt issues. It can’t be stressed enough to WFC2 that they need a new constitution and a new name otherwise they could be saddled with debts they may not even know about. Would the cost of retaining Step 4 football be a price worth paying?

With reputedly a monthly rent of £500 on offer, you’d like to think this would be manageable if there is enough interest amongst the supporters, members of the existing WFC2 membership and the wider community. We do have to acknowledge there will be costs over the basic rent figure.

There is clearly distrust of Irama and their motives. A great deal it being said about them on Twitter and there does seem to be a very hostile and exploitative approach to WFC1. Can we trust Irama not to build houses on the site? If the council can protect the ground as a community asset or suchlike then this will surely be welcomed by everyone.

These are not presented as facts but a best guess as to what is going on from a number of conversations. If there are factual errors here then please accept my apologies.

With reputedly a monthly rent of £500 on offer

This is remarkably competitive tbh. It does seem that there might be a way forward for the club in some for or other, I hope so.

There is clearly distrust of Irama and their motives

There’s always going to be this cloud hanging over the ground now though. Abingdon Town have already had to do the same as Whyteleafe and Brighouse Town, I think, also sold their ground to Irama.

Yes £500 does seem very reasonable if it’s true. It doesn’t necessarily look as clear cut as it first appears.

Hopefully they will enter at step 6 next year, and I’ll try to go to a lot more games now that I’m not going to Palace. Hopefully they can get some community funding set up, I’ll chuck some money towards it if they did.

I actually got a reply from my MP, I really wasn’t expecting that.

Thank you very much for your email and apologies for the delay in replying.

I am deeply concerned to hear about this situation and I know that Cllrs Taylor O’Driscoll and Beverley Connolly are urgently looking into what has happened. I have now emailed the club to offer whatever support I can offer, and I will be following this issue very closely. The idea of registering the ground as an asset of community value is certainly one worth exploring, and my office will be looking into this. I agree with you entirely that we need to protect clubs like Whyteleafe FC, not only because of the enjoyment people get from them, but for the broader benefits they provide to the local community.

Thank you again for your email and please do let me know if I can be of any further assistance.

Irama seem to want to dig into the finances of both Whyteleafe and Abingdon. Not sure what there plans are here?

That’s all sorts of weird.

Very weird. Seems like they are trying to prove both clubs were already in trouble to justify their actions.

Ooh that could be fun, what ground?

Crouchy’s back at Dulwich then

@DulwichHamletFC
STATEMENT FROM THE BOARD: A statement from the board on @petercrouch's appointment and the subsequent documentary series that will follow. #DHFC💖💙 https://t.co/iTVoZaPhPQ 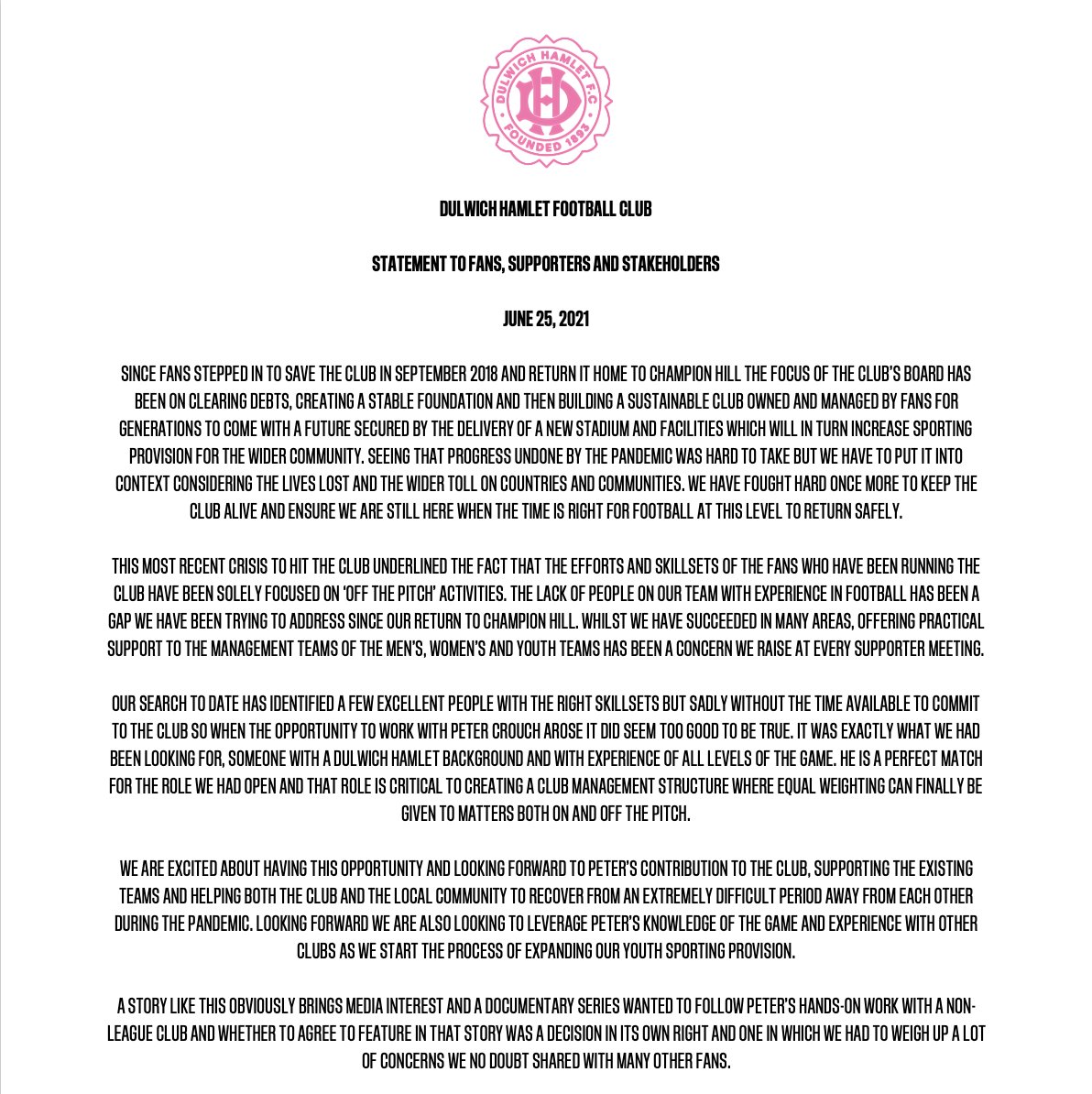 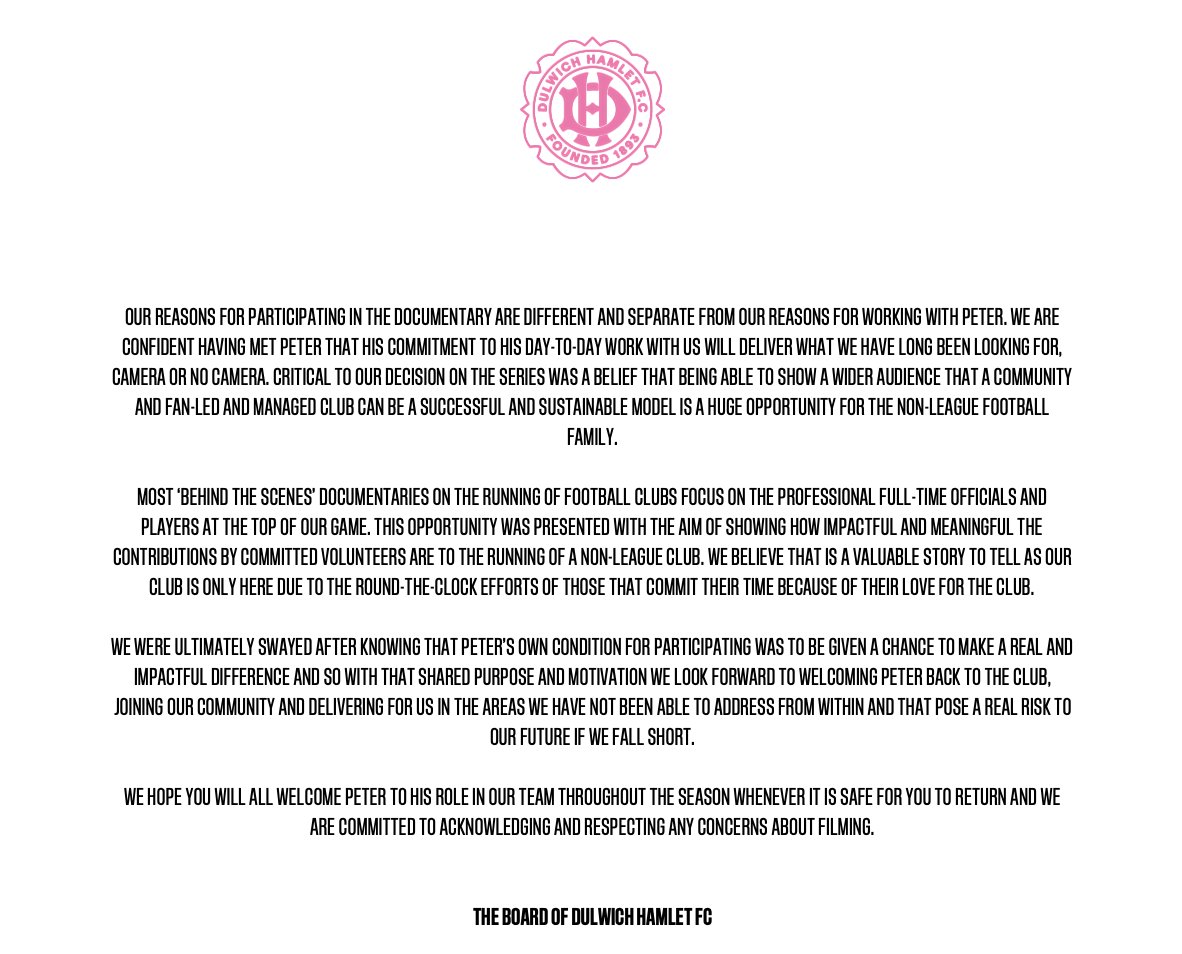 Definitely deliberate obfuscation. The company that are running Whyteleafe hasn’t even existed for the 3 years that they’re demanding accounts for.

I like Dulwich, but that font does them no favours!

Whyteleafe have now officially resigned from the league.

The league had given them more time to try and sort out the ground issues but it couldn’t be sorted.