Do you use SPOON RESTS over there? Or something similar? Does everyone know what SPOON RESTS are without further explanation? Asking for no fucking reason whatsoever

obviously we all love them 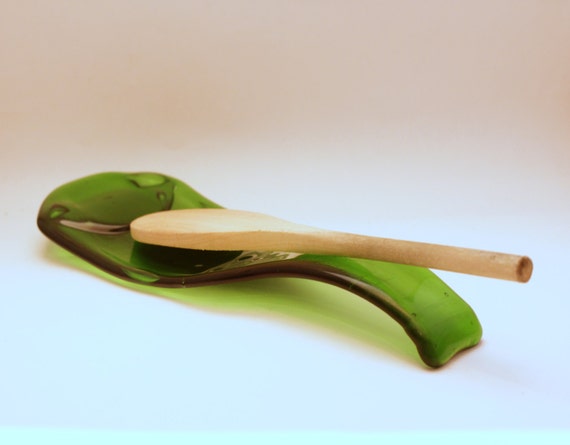 This recycled glass spoon rest is made by melting and shaping a beer bottle in a glass kiln. Careful temperature control ensures you have a beautifully flattened then curved surface so you can rest your spoon or whisk on it when not in use use. This...

at least one spoon rest in every kitchen over here probably

I need a spoon rest actually. Definitely going to get one when we get our kitchen done

I have the Joseph Joseph ‘Elevate’ utensil set which means I don’t need one but we have a failed bit of pottery that was supposed to be a pot that ended up as more of a plate which we use for one sometimes.

thank you for your help

there must be quite a few ceramic ashtrays kicking about that are no longer needed?

I got a joint pottery wheel day experience thing for both of us and a week’s worth of proper pottery lessons for my gf’s xmas present last year, I literally cannot move for ceramic “ashtrays” in my home.

but who rests the spoon rests?

you took a week’s worth of lessons and still fucked up making a pot?

I didn’t, I took an afternoon’s worth and fucking nailed it. She did the week’s worth (and also did well in fairness, this thing came as a result of heavy handedness when transferring a pot to the thing it was gonna dry on)

I think my bf would think I’d gone mad if I got a spoon rest. Though, he does quite enjoy the teabag elephant (one of those things you put used teabags in, it’s actually shaped like a teapot but whatever).

he does quite enjoy the teabag elephant

Never heard it called that before

it’s only half 3 ffs

Haha, you’re going to be disappointed japes… so very disappointed. I’ll see if I can find a similar one.

This is pretty similar -