Not So Secret Virtual Mixtape Santa 2021

Actually slightly relieved to just do a Spotify playlist this year.

Good stuff - I hoped that would encourage people, it’s a lot more work to do the physical version of these things, and in some ways it’s just nice to get a flavour of how eclectic (or not) people’s tastes are!

This is always the hardest part

Didn’t really get into much stuff this year, just big pop stuff really. I mean, this has three Eurovision 2021 songs on it. (It was a good Eurovision tho)

I think it’s fair to say that I do not have eclectic tastes when it comes to new music: Spotify

Sorry to Self Esteem, I cut Fucking Wizardry to put Maneskin in there. Didn’t even like Zitti e Buoni originally but have eventually accepted that it does bang.

May I congratulate you on your 1 hr 19 minute keeping to the rules. Excellent work!

I’m also working on a mixtape of stuff from other years that I’ve discovered this year, which is NOT the assignment but it’s a bit more varied at least. Just putting it in order now.

this is a continuous mix in mixcloud i made for the nightshift mixtape thread that seemed to grind to a halt and this is a mix of stuff that influenced my album of last year on spotify. might do a new one for this but i basically have no time to listen to new stuff these days so idk

OH SHIT the second one is too long! it used to be fine but then i added in my own tracks and now its not PLEASE DONT LISTEN TO MY MUSIC

Double DOUBLE points for having 21 tracks for 2021! TERRIFIC WORK. I’m enjoying your mix so far, I think my children will love it (may have to cough during some of the lyrics)…

Working on my Top Tracks of 2021 playlist on Spotify as I revisit albums throughout the month for my Top Albums list. Currently have multiple tracks from same artists so I’ll share after I pare it down.

Keeping it within 80 minutes will be tricky but I’ll have a bash at knocking one up this weekend. Forewarning: There will be metal, a fair bit of it black.

Yeah my current list just passed the 6-hour mark, and even if I reduce to one song per artist it’ll still be over 3 hours.

This is a nice variation as we can listen to more of them! I will post one but it’s not finished yet

Is there a way on mixcloud to see what track is playing, or a list?

You need to enter the tracklist after you’ve uploaded it. You can then timestamp it (you drag a slider to the start time of each track on a preview bar) and then listeners can skip to tracks. Once you know how to do it it takes about ten minutes.

I was going to do this as a mixcloud but when I got to the second track I realised I didn’t own a digital copy of it or about 4 or 5 other tracks I’d chosen! So Spotify it is, you’ll just have to make do with the crossfade feature to make it more mix-like. I tried to minimise the black metal to make it a bit more accessible to more folks but there had to be a few in there!

1h21m according to Spotify, with the crossfade/mixing that fits within the rule as far as I’m concerned! 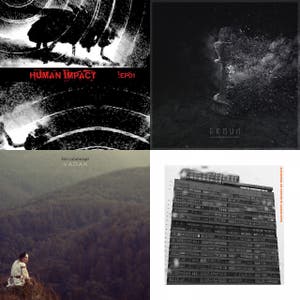 with the crossfade/mixing that fits within the rule as far as I’m concerned!