Obsessing over a single artist

Oneohtrix throughout 2017. Other significant ones include Radiohead (the first band I was obsessed like this with), Modest Mouse (around late teens), St. Vincent, and Deerhoof. Probably many others too

Heard the Low song ‘words’ for the first time the other day and beem rinsing it.

I do, but experience has taught me to try to resist it to a degree. I’ve found that if I just listen to one artist for too long I end up not having a lasting relationship with that music.

It probably happens a lot more frequently than I realize. Never able to go through a whole discography though - I always feel like I’m rushing and not paying enough attention, so I usually stick to one or two records. Last time I really got obsessed was last summer with Fairport Convention (Unhalfbricking in particular).

I’m torn between being having a great time and feeling anxious when this happens, because I know there’s always a ton of great records that I haven’t given a chance yet =|

Totally had this with Modest Mouse and The Residents

Had a really similar experience with Bowie (burglary aside!!) but mine was triggered by the Five Years documentary. Spent a good year or more devouring every part of the back catalogue and struggled to listen to anything else…

Do this a lot with songs: Ive listened to Impossible Soul more times than most songs that arent even close to 25 minutes long.

Had it with Parquet Courts a while back. Went from being a band I quite like to pretty much I listened to. I blame the fact that they hide a lot of their best stuff in the EPs

First was probably Bob Dylan when I was about 13. Had it with Spacemen 3 in a big way too while at University

first was Green Day in 2001, then Oasis, then Radiohead. don’t think i had another major one for a while after that but maybe some smaller scale ones. had a massive Dylan phase at uni too, and an Animal Collective one around the same time, but have barely listened to the latter since.

First of my really big music obsessions was Radiohead, then the Smiths, then Joy Division, then New Order, now Cocteau Twins (in that order). Also had minor obsessions with Led Zeppelin, the Beatles, Bowie, the Cure and Siouxsie & the Banshees.

You have a glorious back catalogue to dive into!

I made this playlist for another thread a while back, one track from each studio LP 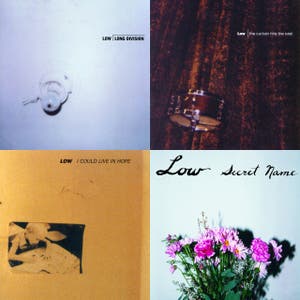 I Could Live In Arbitrary Rules - A Low Playlist