Once upon a time in Iraq

Did anyone watch it last night on BBC2?

If you haven’t, I highly recommend it.

From a personal perspective, as a teen at the time the lead up to the Iraq war had a galvanising effect upon me and countless others no doubt. Felt at the time a generational defining moment. So on that level it brought back a lot of memories, and I found it fascinating as it focused upon long ignored insights from the people who lived it firsthand; not from the perspective of the detached views of historians or politicians but instead from people who actually lived and witnessed events from the viewpoint of Iraqis to American soldiers.

One of the best documentaries I’ve seen in ages. Both George Bush and Tony Blair should be sat down and made to watch it.

Iraq civilians recall their initial hopes before the realities of war become clear.

Once Upon a Time in Iraq review – a gripping, harrowing masterpiece

watched the first episode last night. I thought it was good. It was odd seeing that very strange American soldier talk about how he’s come out of it a lot better than most. I thought everything with the interpreter was good too. how that initial hope he had quickly disappeared. Might watch it again cause I was chatting for the first 20 minutes.

Compared to many he probably has. Felt that he’s cultivated an image to help himself cope. He said himself, ‘if I don’t believe in what I did, what’s the alternative?’

I.wasnt so sure about the American soldier. I think he’s a very troubled guy with a lot of demons that will come.out in the next couple.of episodes.

I’ve seen soldiers like that before In interviews. Really similar kind of mindset/affectations. Kind of reminds me of when Charlie Sheen was ill and doing an extremely over the top macho thing. Maybe it’s a way to cope with it or something or maybe that’s how combat + military cultures train you to be.

Not something I know enough about but it’s really strange.

I started paying attention to the show when I saw him chugging a load of booze in the interview. Must be part of an image he’s projecting. You don’t bring expensive booze and start downing it in the interview unless you’re trying to tell people something about yourself. Odd.

Not sure they’ll be interviewing the same people every week, but it’s pretty obvious he’s been through a lot. Everyone interviewed has. The interpreter’s dawning realisation when surveying the bedouin massacre was heartbreaking.

I watched the 2 minute trailer with the Recon Marine, and I will watch the full programme but got side tracked last night.

The marine seemed straight out of Apocalypse Now. Seemed a bit of a character.

There was a lot of stuff in that documentary that’s not really been seen before, at least not in that level of detail. It was certainly fascinating/horrifying. I was struck by how Rumsfeld comes across as even more of an incompetent psychopath now than he did at the time.

I found the one on one interviews a bit strange. To some degree it felt like all of them were acting a part, and I found it difficult to disentangle the extent to which they’d been told to play up to the camera, how much they were doing it off their own bat and how much was just genuine weirdness borne of having lived through such stressful experiences. The marine quite obviously was presenting a persona, which you’d think was absolutely necessary for the type of job he did anyway. I was less convinced by his “reflective” moments though, which all looked a bit Tony Soprano to me.

i’ve watched the first two episodes, would love to hear more from that marine guy from the first episode, he’s clearly utterly fucked up, as i presume most people who go through their ranks are

it’s interesting to see retrospectively how doomed to failure the whole thing was from the start, like the whole renouncing the ba’athist party stuff and dissolving the army at the same time just seems so obviously ridiculous in hindsight

What an utterly brilliant second episode!

it’s interesting to see retrospectively how doomed to failure the whole thing was from the start, like the whole renouncing the ba’athist party stuff and dissolving the army at the same time just seems so obviously ridiculous in hindsight

You don’t need hindsight to see how counterproductive those decisions were. To gut an entire country’s social and security infrastructure is an obvious catalyst for eventual civil unrest, leading to radicalisation and civil war.

Morally I’m not saying it’s right, but I guess it’s preferable to gutting the entire machine, spin the wheel and hope for the best, as was the case with Iraq.

Bush and Blair should have been prosecuted as the war criminals that they are.

Going to watch this tomorrow. The podcast ‘Blowback’ has been good at explaining the context for the war and the issues with the subsequent occupation. I was too young to really be aware of it at the time but many of the people heading it in the US are just complete ghouls aren’t they. 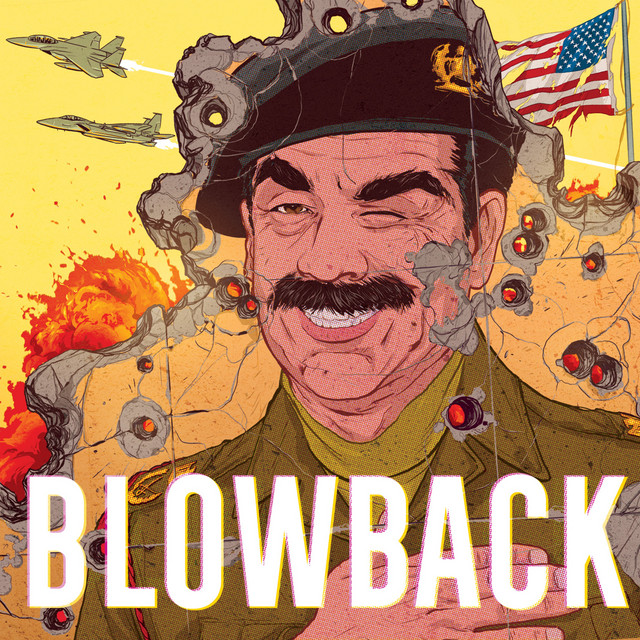 A podcast about the Iraq War.

Second episode of this is horrifying. It’s very easy to have sympathy for Sassaman but he really deserves none for brutalising the people of Iraq.

Honestly reminds me of the reasons Northern Ireland got so bad so quick. The army were initially welcomed as peacekeepers before the military started acting as a military and making insurgency inevitable.

I do hope Iraqi voices get priority in further episodes however.

i finished this at the weekend, it’s an incredible series, kinda feel like i could listen to Dexter, Ashley and Waleed talk for days

Yeah, I was 15 when it happened and though I was aware of it I didn’t really appreciate the scale or implications (I was more interested in Warhammer than actual war at the time)

Should definitely watch this, and I’ve had Blowback on my backlog for a while.

It is a very affecting series. I found the segment with the young woman who lost her eye in an RPG attack very chilling in lots of ways, not least her apparent calmness just a few days after her injury.

If I have one minor criticism, and it’s not even really a criticism, it’s that all the terrible decisions seem to be being presented as in some way unforeseeable, which definitely wasn’t the case. I mean 2 million people took to the streets of London beforehand to try to prevent our involvement at least, and at the time absolutely nobody was fooled by Bush’s “Mission accomplished” rhetoric. We all knew Rumsfeld was a psycho and Bremer was an incompetent at the time. There were plenty of people highlighting the likely consequences of de Ba’athification right while it was happening; after all in the programme it’s presented as obvious, and it was.

The blame sits squarely where it sits. They had no excuses, they just had other things on their agendas.

Yeah, Sassaman full on lost it, going completey renegade. The backlash was inevitable.