I’ve only heard Green (liked), The Box EP (loved) and Middle of Nowhere (didn’t get on with at all, Style aside) so I’ll be reading this thread and listening to the albums I don’t know when I can, from the comments so far I should definitely give the next couple a go.

I’m another one who neglected this album.

Got into Orbital with In Sides and later picked up a cheap CD box set of their first five albums but really just rinsed the brown album and ignored the others - not even sure I ever listed to the later two. I had listened to this one a few times but it didn’t do much for me at the time, but I am really enjoying it now!

Speedfreak in particular is a track I am hugely enjoying, it really ticks all the boxes for me.

Prior to this week, I hadn’t listened to this one for twenty odd years. I always had it pegged as a gestational record where they are working out what they are, and I’m pretty much sticking to that view I think. Most of the tracks are too long - Desert Storm has already been mentioned, but most of them could do with having two or three minutes trimmed. Apart from that gripe, it’s not a bad album at all, and Belfast is up there with their very best, but they’re going to get a lot better than this in the next few weeks.

Orbital only properly clicked for me with In Sides, up until then I had bought the Green album and
Snivelisation but at the time they were a bit too bleepy and ravey for my tastes, I liked a few tracks here and there but not enough to play the albums very much.

So revisiting this album for the first time in a long time I can see why it didn’t really click with me initially, the tracks (other than the stellar Belfast and Chime) do go on a bit and they’re a bit one dimensional compared to their later output. No doubt if I was experiencing them live and chemically enhanced rather than playing them not that loudly out of my Sonos speaker at 10am, they’d probably have a lot greater impact!

that took me a while

How good is the Green album?

The poll closes next Friday.

Won’t say my score out loud so as not to prejudice results but to summarise… much better than I remember, but obviously a long way from being their best.

Gestational is a good description.

I enjoy coming back to the Green Album to hear the beginnings of a style they fleshed out on the Brown Album and beyond. Chime-Midnight-Belfast are obviously streets ahead of anything else and the albums sags in the middle but I have plenty of time for Speed Freak and Oolaa. Steel Cube Idolatry is interesting too.

I got into Orbital in the summer of 93 with the Brown Album and must have picked up Green a month or so later. It was disappointing a first but that’s only because Brown is so, so good.

Obviously, the most important thing about this album is that tracks from it were used in the Mortal Kombat kilm in 1995. 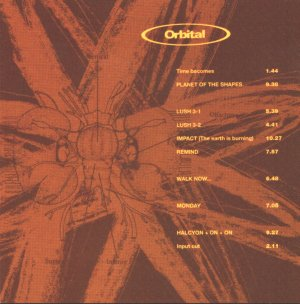 I love the audacity of Time Becomes as the opening track. I’m now a fan of Steve Reich and stuff like that but this was probably the first track I was aware of that used that phasing technique.

I think it’s a real statement about the album to come: this is not just a disparate collection of techno bangers. We’re going to some different places together.

I also really like the playfulness of Orbital and this call back to The Moebius is fun and playful and clever. Even now, many listens later, I still have that brief moment of ‘whoops, did I accidentally put on the green album’.

This is a review I wrote for the Brown Album on Discogs about a decade ago. Tear it to bits - I’m rubbish at reviews.

tl;dr - Brown is one of the best albums ever made.

The Hartnoll brothers have stood head-and-shoulders above the rest for most of their career, from approximately the moment that Halcyon was released in 1992. The brown album is a culmination of their glorious early period, when they could simply do no wrong: the beats, the melodies, the production and - most importantly of all - the coherence and consistency of this set of tunes are all to be marvelled at. I’m hard pushed to think of another techno album that hangs together so well yet with so many highlights.

Orbital are now way beyond techno. Their style is their own and they’ve subsumed techno, tech-house, expansive electronic music, the stuff of soundtracks and ambient works. They’ve hinted at drum’n’bass and, more recently, dubstep. They’ve injected punk, retro, muzak and flashes of comedy into their music - not always to good effect but always in the spirit of experimentation. And it always sounds unmistakeably Orbital. Back in 1993, however, they were techno pretty much through-and-through and the brown album is the last they did that had a single, definitive style.

This unifying style is perhaps one reason why the brown album plays, at least during the first half, as a series of movements in a techno symphony. The stretch from Lush 3-1 to Remind is 30 minutes of seamless, pounding and melodic music. The bright, soaring sounds of Lush 3-1 shape-shift into the buzzing acid mantra of Lush 3-2. The morphing of Lush 3-2 into Impact (The Earth Is Burning) is one of my first ‘wow’ moments on the brown album; as Lush’s refrain fizzes away the layers of rhythm remould themselves as a single high-pitched synth note rings, and then the breakbeat kicks in. The 10 minutes of Impact are an incredible journey, with a chorus of atonal horns, a gorgeous descending lead melody and a playful acid line combining and recombining. There’s also a tense middle section and some great samples (“it’s like a cry for survival”). The next ‘wow’ moment is the point at which the cyclical and arpeggiated synths of Remind drop. Impact’s rhythm dies away and we are left with the sound of the synths windmilling for a minute or two before the brown album’s hardest track kicks in. Based on a remix of Meat Beat Manifesto’s Mindstream, Remind hits you with two alternating sections - one with an insistent, driving acid line and the other sounding like an angry buzzsaw - married to hard beats. It’s no accident that the whole of this section of Orbital’s second album is still played live today.

I used to dismiss Walk Now… and Monday because they weren’t part of the ‘techno medley’ and weren’t Halcyon. I was being unfair though, judging them by the utter brilliance of what comes before and after; they are, on their own, very very good. Walk Now… is almost trance-like, with phased, reverberating sounds built up over what sounds like a looped digeridoo sample. The tune clicked for me when I heard the Walkabout version on the John Peel Sessions. Monday, by contrast, is a slice of bright - and by this album’s standards, light - melodic techno, a tribute to some of the original Detroit sounds of the mid-to-late 80s.

The first and last tracks are, or were, interesting exercises in phasing that are best ignored altogether these days. I also used to dismiss the second track (and first proper tune), Planet of the Shapes, and skip straight to Lush 3-1. It is a fine track on its own, however, and, in the context of what’s to follow, actually creates a lot of much-needed space.

So, to Halcyon + On + On. The single version of this tune, mentioned at the beginning of this review, established Orbital as real heavyweights. Even more amazing is what they then did with the track for the album, stripping out the slightly harsh techno rhythm and the ringing noises, adding more space with a beautiful piano and picked guitar melody in the ambient intro, pushing the descending bassline to the fore and leaning heavily on Kirsty Hawkshaw’s emotive, cut-up vocal line. Halcyon + On + On is a timeless classic, and one’s sense of time actually disappears whilst listening to the music itself. It is incredibly seductive, emotional yet wonderfully logical, and is perhaps the best thing Orbital have ever done.

What I like best about the brown album is the way it tweaks the energy and emotional content up, very smoothly. Whichever track you enter at, it’s difficult to stop playing to the end because you need that fix of the next track to help make sense of the current one. For an instrumental album, this is quite an achievement and this is why I consider it one of the best albums of all time.

I agree with every word of this

Walk Now is the most underrated track in dance music history I reckon. It’s simple and it’s perfect. The synth after the drop plugs straight into my beaming joy gurning and eyes-closed-sunrise-in-my-face euphoria

…and this is coming from someone who hates all that didgeridoo, tribal, crusty nonsense

The synth after the drop

This is possibly my favourite bit of the entire album - fully sounds like music made by machines rather than people. Also thought of it as a second cousin to Rez/Cowgirl

The rest of this album suffers by not being Halcyon&On&On, but then again so does 99.9999% of recorded music. This record (along with an Underworld best of) was my first step into dance music that wasn’t “intelligent” or part of the Chemical/Prodoigy-acceptable-to-rockist-indie-kids thing. As such it actually took a long while to connect as the dynamics are quite different to what I was used to - much more about hypnosis and sublimation, much less about drops and choruses. This was 20 years ago though, and everyone gets to be wrong when they’re young.

Listening now and trying to be objective, I do feel that the two tracks between the techno-suite and Halcyon are a bit of a lull. They’re good n all that, but just don’t quite scrape the glorious highs either side.

As such - it’s probably an 8 for this one. I expect there will be 9s and 10s along very shortly though.

Halcyon is a fucking 12.

I had a shocking realisation the other day, I don’t think I’ve ever actually heard the brown album! I got hold of Diversions on CD in a sale years ago and I think in my mind I conflated it with this one so never investigated.

This is going to be corrected today.

This is going to be corrected today.

I advise stress testing your speakers at the same time.

I’m looking forward to digging into the album as a whole. I tend to just listen to Lush to Remind with is without a doubt the best run of tracks on any techno album.

Looking forward to listening to this today. The run from tracks 3-9 is fantastic.

Could we have a non-album discussion at the end? There’s loads… Times Fly, Beached, The Saint, Frenetic, Don’t Stop Me/The Gun Is Good…