Out of the whole of humanity

Has to be a proper hit it over the fence home run, these aren’t game conditions, you can’t get it because of some fielding fuck up shenanigans.

Oh right, no chance then. Definitely the baseball one.

Depends how long you have to practice, but there’s no way that I could ever do a dunk, whereas I’d be fairly confident of fluking a home run after a couple of weeks.

even if you just rock up as you are and you get one swing, reckon there’s still more people could get a lucky hit than would ever be able to get near a basketball hoop

You could fluke a home run more easily than a dunk. I know even if I tried flipping loads of times I wouldn’t be able to jump high enough to dunk. Swinging a bat might make a flukey connection and send the ball over the fence.

Also a home run is generally a lot more than 300ft, as there is a 320ft minimum at the foul poles and the outfield center is generally 400ft away

Oh right, no chance then. Definitely the baseball one.

Yeah the home run is at least in the realm of possibility for most humans, whereas you need to be a genetic accident to be able to dunk. One is about technique, the other is a height test #discrimination

Gotta be a lot easier to slog a ball out of the park than doing a slam dunk.

Even just blindly swinging the bat every time, there is a chance you’ll just happen to middle the ball - you aren’t going to randomly jump high enough to do a dunk as a fluke.

Spud Webb is 5ft 7 and he could dunk! Anthony Jerome "Spud" Webb (born July 13, 1963) is an American former professional basketball player. Webb, who played in the National Basketball Association (NBA), is known for winning a Slam Dunk Contest despite being one of the shortest players in NBA history, being listed at 5 ft 6 in (168 cm) tall. He is currently the president of basketball operations for the Texas Legends, the NBA G League team for the Dallas Mavericks in Frisco, Texas. Webb was born into poverty in Dallas, Texas. He was ...

You people are (almost) all idiots.

I’m being generous, but there are instances of homers at 295ft such as this: 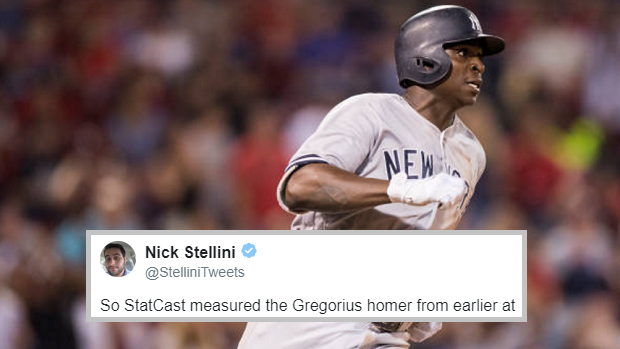 The shortest home run of the Statcast era shows how unfair baseball can be -...

Didi Gregorius is not a player known for his power, although he’s had some help in recent seasons.

anyone thinking they might ‘fluke’ twatting a baseball over 100m is a fucking dunce tbh.

moreso than thinking anyone below 6ft has a hope of dunking?

absolutely not. But a small percentage of normal people will be tall enough to dunk. Reckon that’s bigger than the number of people who’ll have the strength + technique to hit a homer

But a small percentage of normal people will be tall enough to dunk. Reckon that’s bigger than the number of people who’ll have the strength + technique to hit a homer

You can train and develop strength and technique, you can’t train to be taller

The strength element is not as great as people think. It is more about timing and hand/eye Spud Webb is 5ft 7 and he could dunk!

Look, anyone taller than me is a genetic accident and the product of eugenics