People who have dogs or cats

What do they do when they see themselves in the mirror?

The people or the animal?

Admire how handsome I am, usually.

Oh, wait, you mean the cat. He just ignores them

Tobias doesn’t give a shit

Does that mean he recognises that it’s him, so no reason to be startled

Or does he just think there’s another cat that lives there, who he only sees in this particular location

I feel like the first time they’ve met mirrors there’s been some sort of, ‘why, helloooooo, who do we have here’

I’m not sure, but I suspect if he thought it was another cat he’d probably try to fight it.

We can’t watch nature documentaries because our cat keeps launching herself at the tv to catch whatever’s on.

Genuinely doesn’t seem to register with our cats. They just react like you were showing them a wall.

Think the first few times he saw himself I think he wondered why there was another dog in the room - went up to it and pawed at the mirror. Presumably learned quite quickly how a mirror works though.

He’ll watch the TV sometimes though, although as soon as he sees another animal (especially another dog) he goes mad and runs right up to the TV barking at it.

My old cat did freak out once when she saw herself in the mirror. Maybe it was the first time she’d seen her reflection, idk. Normally they don’t react at all but you can make eye contact with them so they obviously recognise the reflections of people

The official line is that cats don’t recognise themselves in the mirror because they fail the spot test. That’s when you put a mark on the animal somewhere it can’t see without a mirror, then show it its reflection and if it tries to clean off or inspect the mark then that’s proof it’s recognised itself. I’m not sure it’s a perfect test though, because if the cat can’t see the mark usually how does it know it’s new? And maybe it doesn’t care about dirt it can’t feel on its fur. And if they don’t know the reflection is them why do they not behave like it’s another cat every time?

Spooked the first couple of times. Completely over it now, don’t even hesitate. Maisie was well into the BBC documentary the other day about Leopards though. 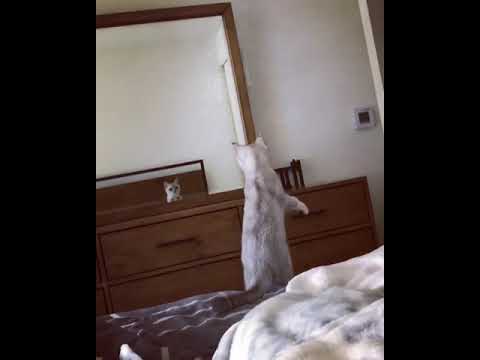