Phillip Schofield has come out as gay

A statement from Phillip https://t.co/iIE7NcLZ2I 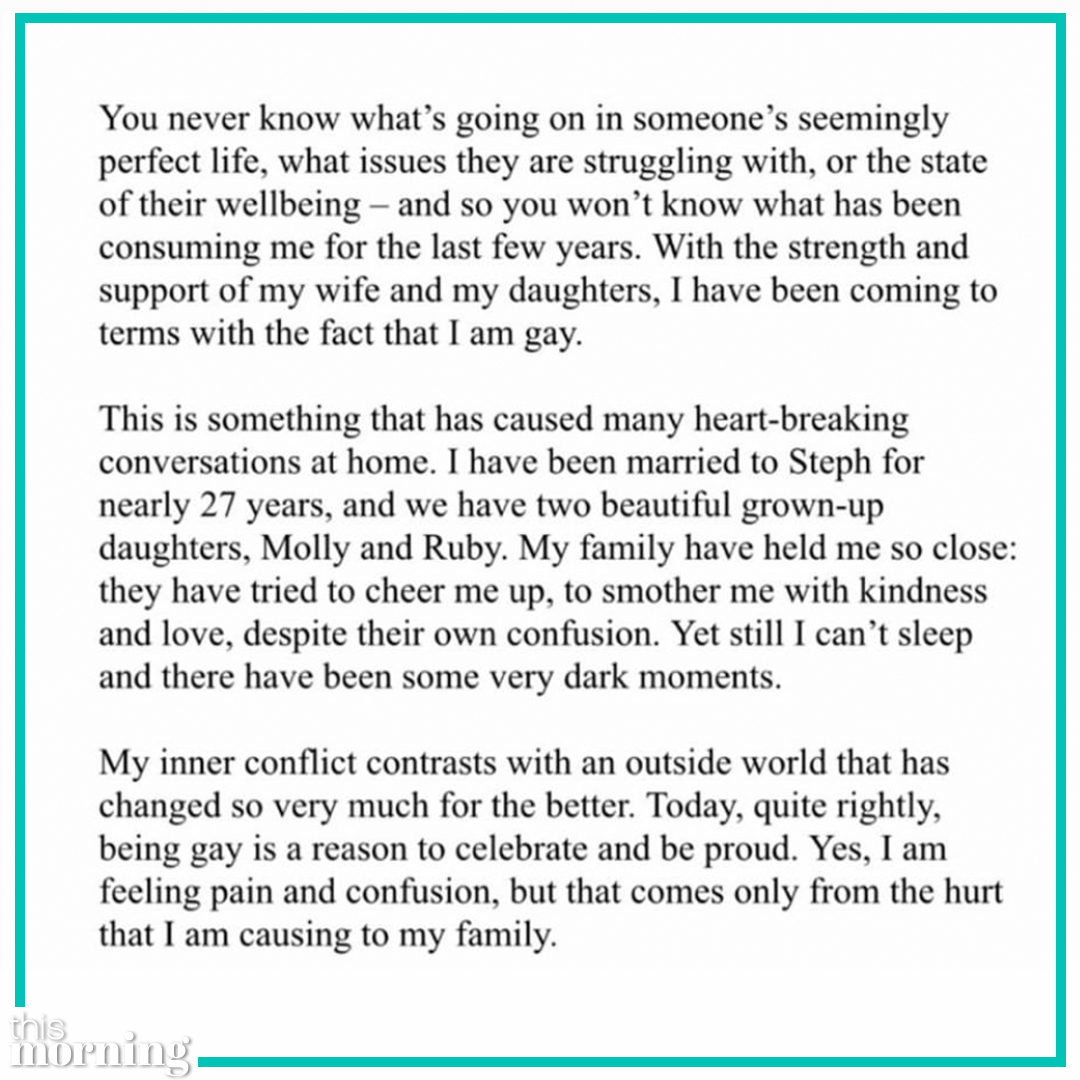 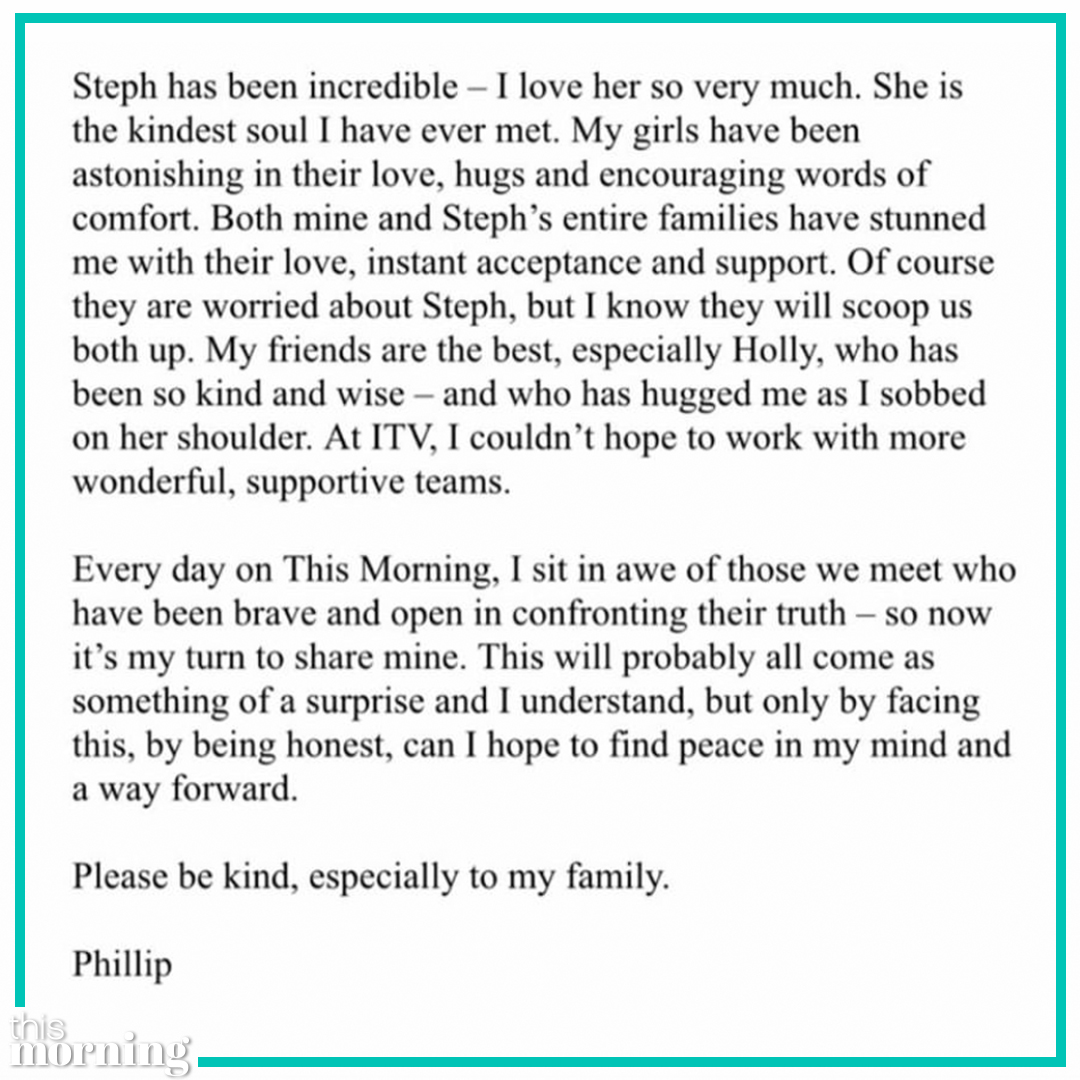 Watching Holly interview him now on This Morning. Very surreal.

All seems very lovely and cool though. Fair play

p much my thoughts exactly

I don’t. This doesn’t change that.

He seems like a genuine and nice man to me

This probably isn’t the thread to say what I think of him.

Look I do not like the guy at all, but I’m not about people focusing on that instead of how fucking horrible it is that he felt the need to live like this for all his life so far. Having to privately wrestle with your sexuality in cishet society can be fucking torture.

Phillip Schofield has come out of the broom cupboard

Cool way to deflect the fact that the world is catching to what a hateful bully he is, by all accounts.

That aside, I’m so happy that he has managed to come out and be supported by his family.
There must be so many people in his shoes who have got married despite a niggly feeling, and before you know it kids have come along and you don’t want to rock the boat, and so you just get on with life. Decades pass, kids go to uni, and although you are now ‘free’ of your parental shackles, you have to weigh up whether you can really be bothered exploring that niggle or just let sleeping dogs lie. You can see how easily how this can happen in peoples’ lives (I have a very good friend working through this just now with her husband- she is a lesbian. They have kids and one with ASD needs and they’re probably going to wait until the kids have finished uni, which is nearly a decade away. I have to be so careful in how I give support to her because I want to scream ‘FFS this is going to KILL you’, but it’s not my business.)
Sorry, I digress…
So yeah- sad and poignant.

Yeah the politics thing to me is secondary to a lot of other reasons why I don’t like him (rich white man in being Tory shock!) but it’s obviously an incredibly difficult and brave thing for him to have done, and really not nice that he felt the need to keep it hidden all these years.

More like Phillip Scoville, cos this news is SPICY!

Good for him. Hope him & his family don’t get a media haranguing

I hate the Tories as much as the next person but I am really not a fan of that angle being used to undermine quite a significant coming out. to come out when you’ve been happily married to a woman for almost 30 years with, have kids with, and generally live that happy families lifestyle massively in the public eye… that is a big deal and it is so clear from some of the initial public responses/conversations that it’s a set of circumstances that many people do not know how to respond to and do not understand.

It’s not the first time it’s ever happened or anything but it’s an incredibly high profile instance of this particular type of coming out and I imagine it could be a really huge deal for people in similar situations and that a public outpouring of support may be of great comfort and inspiration to those who are living a lie.

Not to be dismissive of the reasons why you would be sceptical of someone who hasn’t held the government to account or anything but I just think it’s a bit twatty and blinkered to turn this into an ‘oh well he’s a Tory so fuck him’ narrative.

I wonder which Sunday tabloid is now looking for a new front page headline for the weekend?

He said his hand wasn’t forced but you never know