Do you create anything inspired by places? Want to contribute to something incredibly vague and quite soon? What an offer scout, tell me more…

In July I’ve vaguely promised myself to run some 10 years of tours events. The idea was a weekend of back to back routes like a sort of dork summer school to get people to think critically about places but quite like the idea of putting something else on alongside that features place based art.

I previously did an exhibtion and gig night based on google streetview, and a day long festival of talks and spoken word and some pretty noisy gigs in response to Stevenson Square.

Don’t really want to organise anything big though (especially as the last biggie was under my employer and funded) as i get too stressed at big event planning so i thought i could just do some sort of audio or video exhibit that you can access during the weekend in a venue and then online somewhere. Or maybe its just online as a weekend accompaniment. Even though my own vibe will be lots of anti gentrification stuff i do also do creative place writing and so I’d like to have a creative side to things.

Anyway, does anyone here create anything that’s been inspired heavily by places and want to contribute? It doesn’t have to be Manchester but i guess my idea is about people thinking about places differently.

I’ll move this over to classified or something soon but posting here for now/attention.

Tumbleweed, please do see yourself through the thread with some decorum. Thank you.

I went to an amazing piece of place-based theatre at the Lit & Phil Library in Newcastle - it was all about the relationship between Harry Houdini and Arthur Conan Doyle and spiritualism, so there were all sorts of ghosts and fairies popping out of the library shelves and climbing down those wheeled ladders.

I can’t remember what it was called but it was about ten years ago.

That sounds cool! Have you been to the Portico library in manchester? That’s connected to our lit and phil society and seems like a ghosts and fairies place too.

This sounds awesome - like a series of interconected site stories?

No, I managed to spend three years in Manchester without visiting many of the cool or interesting places.

I spend quite a lot of time working on Mount Rd in Gorton though.

Yeah but they’re not really creative output, so I’d like something creative to hold it all together.

I actually think what i really want is maybe quite experimental soundscapes/music/field recordings etc to integrate into the walks themselves and to play or host somewhere independently of the walks.

One route I’ll be doing has a bit of an apocalyptic vibe to it and we go to see an abandoned shopping precinct that has some bleak concrete art and weeds growing through all the cracks then you head around the back and it opens up into a huge green valley with deer that many people dont know about and it feels ripe for some spooky music or something.

I’ve worked with Hayley Suviste before on a couple of pieces and I’ve wanted to work with a guy called David Birchall who seems keen but idk. I can’t visualise what else might work and it’ll have to be existing work as barely any time left really.

I already feel like this is a job for Disintegration States.

One route I’ll be doing has a bit of an apocalyptic vibe to it and we go to see an abandoned shopping precinct that has some bleak concrete art and weeds growing through all the cracks then you head around the back and it opens up into a huge green valley with deer that many people dont know about and it feels ripe for some spooky music or something.

I did an album that was basically centred around this vibe

I actually think what i really want is maybe quite experimental soundscapes/music/field recordings etc to integrate into the walks themselves and to play or host somewhere independently of the walks.

I do this sort of thing, although I don’t know Manchester beyond a few brief visits so don’t really have a grounding in the specific place aspect.

Don’t know Dave Birchall personally but I know people who do and he seems like a good egg who is generally up for stuff!

Ooo that’s cool! I love it!

Do you know much about the UCP tripe restaurants? The flagship one was in Manchester and in the 60s it was very sophisticated to go and get some “lancashire calamari” there after you’d been somewhere cool like the Kardomah Cafe for coffee with some poets. That particular one had bright blue animal hide on the walls of the restaurant and a central dance floor and fountain and people thought tripe would turn their lives around, making white soup from it and using the water it was cooked in to bathe their kids.

Anyway, this sounds like I’m waiting for a plane in like an airport-based UCP in the 60s.

I need to have a proper think about what i want really, it really might not matter that its not manchester inspired at all, but thought it was worth being vague in here for now to see what comes up!

There’s other peeps on the label (can see he’s already replied but @manches obvs, and [hope you don’t mind me tagging you in] @colossalhorse and Ghost Halo also come to mind) that I think would be perfect.

I think most of my stuff is maybe a bit too sparkly, especially anything I’ve got that’s specifically place related like this. I’ve got some more soundscape moody things like this, this and this. But well up for trying to put something together more suitable if there’s time

Just having a listen now, i think if i actually go down the route of sound accompanying a walk/s then there’s room for a wider range of styles too as the landscape changes.

I always like it when a performance / recording / installation causes you to listen to the place you are in more closely: where listening to the sound draws your ear in and opens you up to what was always around you.

Just in case anyone reading would like a vibe of this place. The valley is to the rear but what you see before that is just this…

But then just behind it it opens onto the Irk Valley, which was a former sandstone quarry (which is a big draw for me) then contaminated land, and now this (which is over run by the charmingly named hogweed bonking beetle).

However all of this will be gone soon for Victoria North, the far east consortium’s massive gentrification which will displace all of the collyhurst residents.

The rest of the area has other bits of interest to me too, including the leftovers of an old railway line and station that was never fully demolished and is now in the middle of a council estate, there were plans to house the homeless in the arches but it’s just buddleia living there now (this too will be demolished). And on that street there’s a dog who is the ‘street dog’, not that he’s a stray but he belongs to the street, and he’s a big symbol of the displacement to me, something you can’t replicate when you’re moved on and out of the area.

And final bit of context is this kid in 1968 dressed as a cowboy in the centre of the postwar landscape around there 8 years after a mass slum clearance of the area that demolished most of it (those flats are still there, but reclad now) 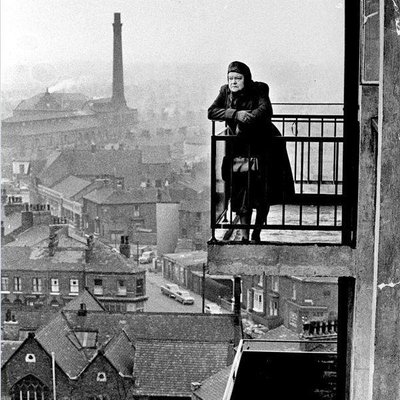 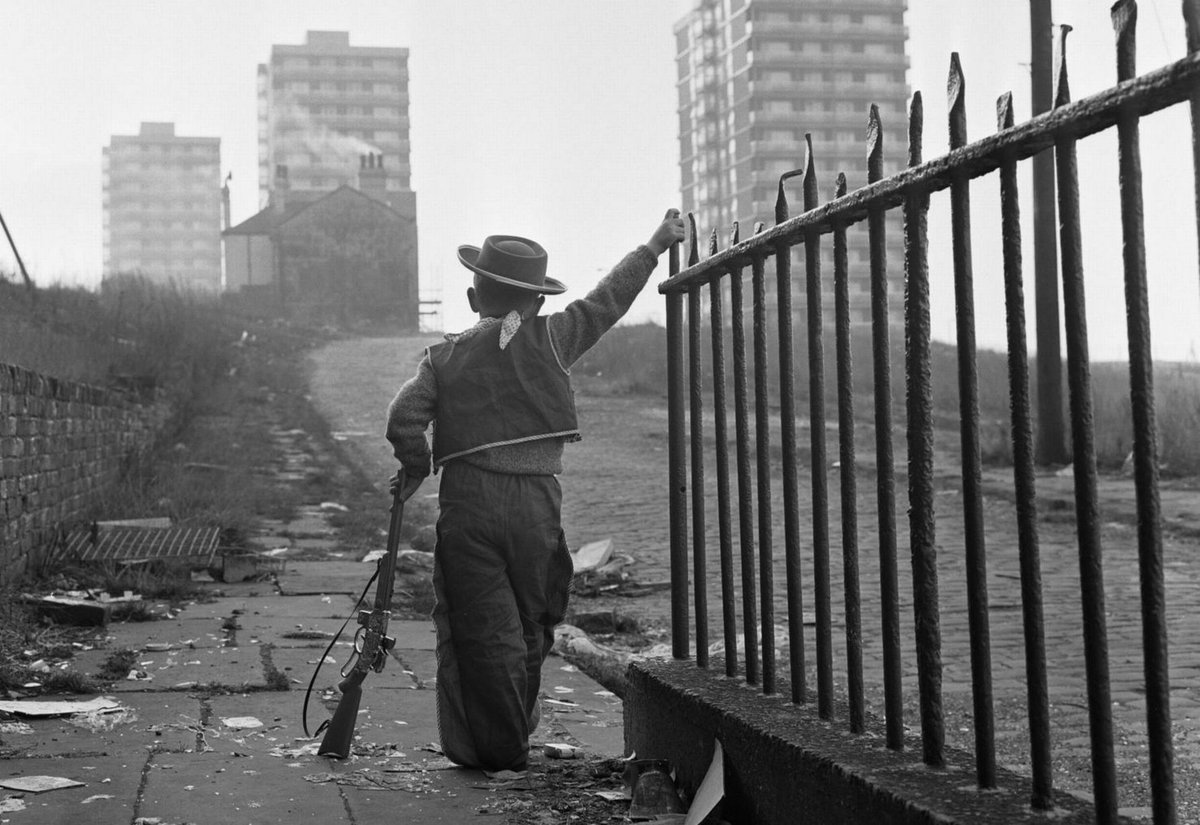 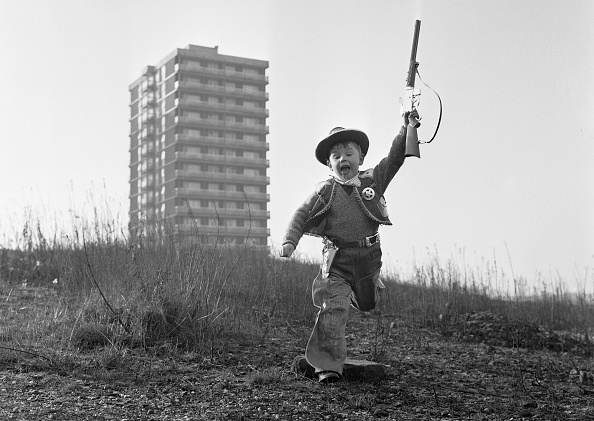 Young boy playing cowboys in Collyhurst, Manchester 14th January 1968 His grandfather knew this street when tiny terraced houses stared at each other. His father remembers the bulldozers moving in....

Which is where the Social Board is located in real life.

Yes I believe that image up there is hipyounggunslinger

I love the sound of this. Dunno if I can fit in anywhere but I’ve been trying to do more stuff about and with a sense of place of late. Everything I usually do ends up a bit solipsistic. The tracks I have that are inspired by places are really about my memory of them more than the places themselves. I could do with removing my head from my derriere and thinking critically about places more myself tbh.

Excuse how this is a post tangential to the creative stuff I’m after in here, but bizarrely 100% relevant to it as well…

Which is basically that post I made up thread, worded as a PhD title.

Then after a guy from CUNY who I know tweeted I’d be perfect for it the course leader, who was my MA course leader too, just sent me this.

What could possibly go wrong with two jobs and entering into post-grad studies again, RIGHT?!

This would be ace to have some dis soundtracks.