Welllll Shellac claim they won’t play corporate festivals and I understand they have played it.

Weird, am adamant they were sponsored by a bank and just can find it now so must’ve made it up.

The BBK in Bilbao BBK is a bank.

Think they played a few years back?

ING maybe? They could have had stuff on site or doing some marketing like those people that used to give beachballs out at Glastonbury. So they just sneak it in.

In a few weeks when everyone is finally properly bored might be a fun weird game find the shittest possible sponsor of a festival.

The Messthetics played it last year

Ian MacKaye has played Coachella with The Evens, and, I believe, attends most years.

We're sad to say that All Points East will not be taking place in 2020. Please read our statement in full below or at apefe.st/2020update. Stay safe, and see you next year. https://t.co/f6OpaUuHqX 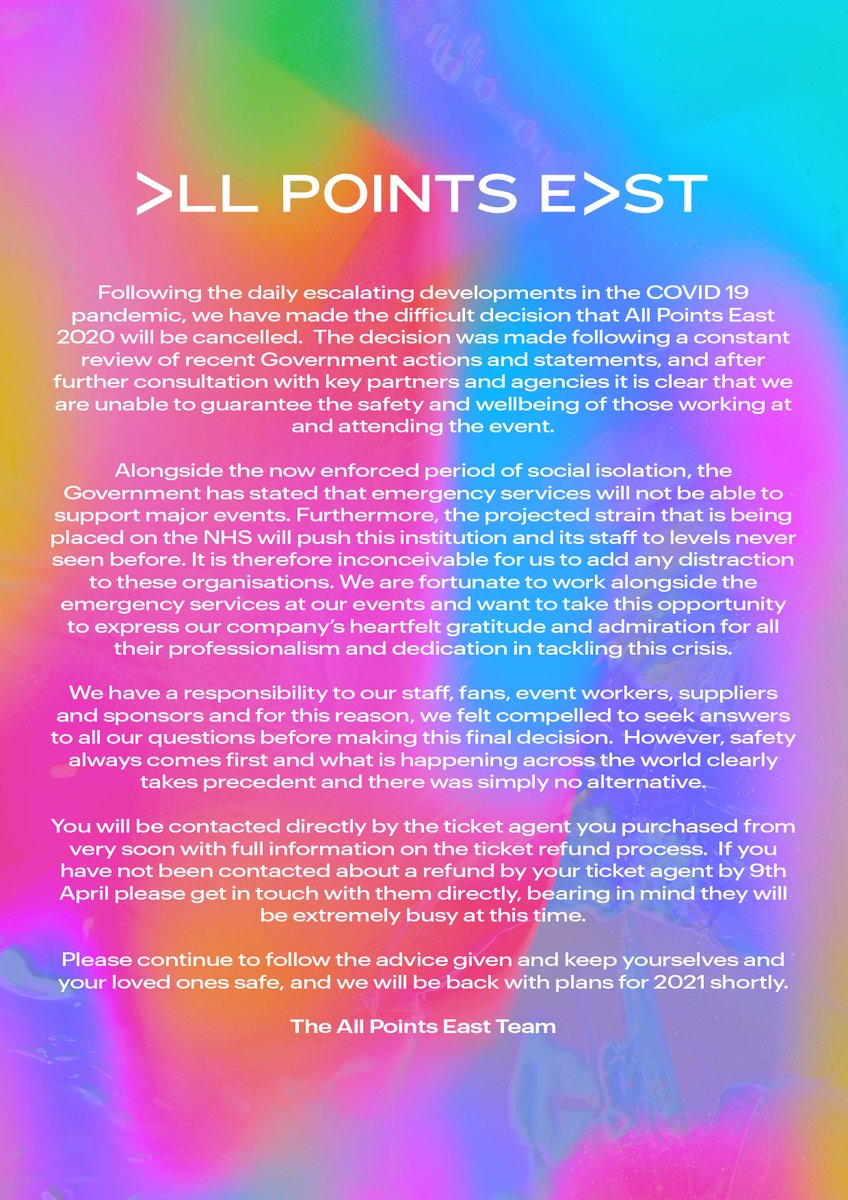 Surely festivals like APE cancelling force their hands to cancel rather than postpone, as they share many acts who would have costed their trips on the fact of doing multiple stops in Europe.

Surely festivals like APE cancelling force their hands to cancel rather than postpone, as they share many acts who would have costed their trips on the fact of doing multiple stops in Europe.

Probably depends more on the festivals in August cancelling, since Primavera could always put on a festival with other artists.

That said, presumably these other festivals have taken a look at moving and have failed to do so. Can imagine it being harder for APE to get Victoria Park on another weekend than for Primavera to get the Forum but still.

There are quite a few festivals at the Forum I think maybe 4 or 5 I was surprised when I found out. say each festival needs the week before and the week after to setup/takedown. So you might have 8 or 10 weeks already taken up and if no restrictions are lifted until mid June it becomes more and more difficult to reschedule. It’s going to get cancelled I’m 85% convinced of it and probably not rescheduled.

It’s going to get cancelled I’m 85% convinced of it and probably not rescheduled.

It’s going to get cancelled 100%, and yeah, probably not going to be having any events of this size by August/September either.

Something that I hadn’t really considered until probably last night when my wife mentioned it (along with how absolutely rammed with aftercare they are going to be) and then with the APE statement this morning. The emergency services are going to be absolutely fucking knackered when this is all over and maybe a summer of none events wouldn’t be such a bad thing after what is happening right now.

I think they are absolutely determined to move it and working with the other festivals to coordinate on the possibility of this.

For all the terrible pain being felt in Spain at the moment, they should be turning a corner in a week or so and the mortality rate falling.

It’s still March. That leaves a really long time until the end of September which is when they might look to move this to. Bands will want to play. People will want to attend. Will the government have lifted restrictions by then? It’s possible. There will be a pressure to move back to a functioning economy which may mean taking some calculated risks by then and there will be technology and on-site testing which can better spot people with the symptoms/immunity.

Could well be wrong but my gut says it could still be on.

What I mean is it’s 100% getting cancelled in June. What happens after then, who knows, I’m just pessimistic about 100,000 people at a festival in August going ahead.

Ah, sorry. Yes I thought June being off was long assumed.
But as for a postponement, I’m optimistic.

Le Monde thinks end of August (and someone on another forum expecting a statement this weekend).

A vast number of major events of a very similar nature have been organised for the end of the Summer.
These decisions had a lot riding on them and weren’t made lately.