Should they still exist?

I spent Christmas with my in laws and their “bulldog”. I put it in quotes because while she’s obviously mostly bulldog, she’s not entirely, or at least is a blend of different bulldog types. The story was she was cheap because she had a messed-up tail, but everyone knows my brother in law just fancied a bargain and decided to overlook the missing paperwork.

Anyway, the dog has a lot of problems. She’s already lost one eye and in the older she gets is increasingly likely to lose the other. She’s now started to develop something called “idiopathic head tremors” which apparently 40% of bulldogs develop. Pure bred dogs - even if they’re not 100% pure - just seem messed up, poor things.

Do breeders put any efforts into trying to mitigate these health risks? What’s the rationale for pursing pure breed dogs any more? Heritage? Some just look cool? Idk, seems messed up, but happy to hear from any Crufts fans.

This recent episode of 99% Invisible was interesting 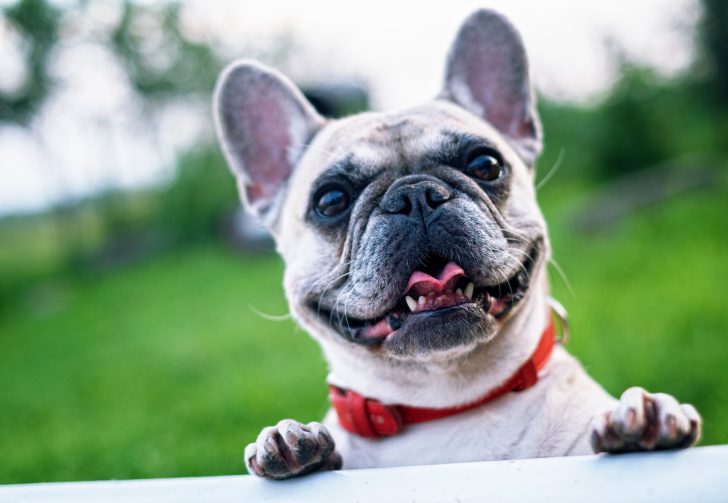 The French bulldog is now the second most popular breed in America. Their cute features, portable size, and physical features make for a dog that can easily travel and doesn’t require a lot of exercise. “At around 20 pounds and perfectly sized for...

My old next door neighbour used to own a purebred German Shepherd. CW animal illness and death because she was purebred, her intestines ended up getting knotted up throwing herself enthusiastically at the garden fence every time a neighbour went past, and she eventually died as a result

Our cat is purebred and a big thing the breeder said was that they’re bred now to be healthy as possible. So they’ve cracked down on inbreeding etc due to the health ramifications, and part of what the breed is judged on is robustness of health.

Dunno why that isn’t a thing in dog breeding.

No they probably shouldn’t exist. Especially in forms that are particularly bred for appearance (breeding for working purpose is more acceptable) but unfortunately, despite there being so much attention on this, people choose a dog based on appearance a lot of the time(+).

Fundamentally the business of dog breeding is a wild west from my limited knowledge. There’s not enough regulation and licencing and because there’s £££ to be made, corners are cut and animal welfare suffers.

I’d like to see a proper standard for a breeding licence with lots of vetinary intervention, checks and care for animals front and centre.

(+) We are a little guilty of this having chosen a cockapoo although that was partly for the hypoallergenic properties of their coats.

There was a German shepherd shown at crufts a few years ago that looked utterly deformed - its spine was so curved, it could not have been comfortable. Same for lots of the brachycephalic breeds like bulldogs - bred so poorly they can’t breathe without intervention, can’t go outside in any kind of heat, can’t run around. The corrective surgery is expensive and beyond the means of many owners.

There obviously are good breeders for lots of breeds - I love cavalier King Charles but years of poor breeding has totally screwed them health wise so finding one without heart, hip and eye problems in their history would be difficult. But there are some out there that robustly health test each generation of dog before breeding.

I veer between the idea of preserving a sense of history - many really lovely traditional English and Irish breeds are at risk of dying out altogether without selective breeding - and saying ban this kind of thing outright.

There is maybe a middle ground: A veterinary assistant passionate about French bulldogs' health is trying to make these dogs healthier by breeding them so that the problems causing their breathing issues won't be passed to future puppies.

They’re much more “bull terrier” like in appearance (as they should be) which I don’t think will have the same aesthetic draw that people seem to be looking for. Which is no bad thing if it means they’re no longer overbred.

Cockapoos: Come for the hypoallergenicity, stay for the fact that they are by far the most highly strung animals in the world and you can’t leave the kitchen now, no you can’t

Sometimes other dogs have social issues with these poor lads because dogs rely on the nose and muzzle as well to understand other dogs’ expressions. These guys don’t have those features so some dogs get freaked out and react with hostility.

The German Shepherd example is so utterly bizarre as it’s noticeable how quickly the stooped back thing has been developed. And just why?

Really difficult with all the dogs with breathing difficulties, bulging eyes etc because they basically seem to be the most popular breeds.

It’s about the breeding decisions rather than specifically being pure bred though isn’t it?

What’s the rationale for pursing pure breed dogs any more?

Temperament? I mean if you buy a specific breed you can get a good idea of how much exercise it will need, how much it will suffer from separation anxiety, it’s general personality etc etc. If you get a mongrel, you don’t know what you’re going to get?

That said, I’m not sure I understand what “pure” means here? Is a cockapoo basically a mongrel, in as much as it is a mix of breeds, and therefore not what you mean? I’m a massive fan of border collies but I have a feeling they’re not pure bred, although I’m not sure why.

I believe that not only do breeders not put effort in to mitigate health risks but they do the opposite and actively breed to develop characteristics that are risky, such as making dachshunds have even shorter legs.

Broadly agree with what’s been said here so far. When I’ve been to dog shows (not Crufts or anything where they’re judged, but like a festival of dogs where you can go cuddle them and talk the owners for info on the breed/join the community) there’s always been a huge emphasis on health of the dogs, specific things to look for if getting a particular breed, and things breeders are doing to mitigate health risks. I’m not sure that that’s enough, because for every breeder who takes it seriously there must be 10 more who don’t really give a shit.

A friend of mine had a bulldog who was surprisingly healthy for her breed, she had some problems with her eyes later in life, but never her breathing (despite sounding like a chainsaw). Meanwhile my cousin spent thousands on a frenchie - because Essex - and he is completely beset with problems, can’t eat anything without throwing up, constantly pooing. He is a very ill dog.

@carnivalboy Pure breeds are the ones registered with Kennel Club, so border collies are considered pure even if you find some divergence way back. Cockapoos and the like are considered mongrels because they are a mix of two different breeds. But even though technically crossbreeds are healthier I think there’s such a demand for “designer” dogs (I’m 100% guilty of this) that poor health is being bred into new combinations that have been thought up purely to look cute, like your pomskys, froodles and the like. It’s really sad. All we can do is try to look after as many doggies as we can.

I think there are huge issues with dog breeding - some breeds should frankly be allowed to die out because the health problems are so severe and others are heading that way if not remedied. The Kennel Club and stupid notions of pedigree and breed standards are responsible for a lot of that.

Not no, although I think that gene pools should be expanded when there are health reasons, I strongly disagree that they shouldn’t exist.

Firstly, there’s a reason that working dogs - including assistance dogs - tend to be specific breeds. If only shepherds have collies and only guide dog users have labrador then the breeds would obviously be unsustainable as there would be enough variation in the gene pool.

Secondly, although breed isn’t a guarantee of temperament, certain breeds do have a tendancy towards certain qualities. Depending on your circumstances - other pets, proximity to livestock, children etc - temperament will likely play a major part in choosing a dog. Not being able to anticipate that could easily result in far more dogs being given up because they don’t work in the lives of their owners.

Yeah there’s a big difference between breeding specific breeds and overbreeding based on specific physical traits to meet a commercial market need. The latter is absolutely urgh.

It doesn’t happen so much with cats but you do get it, eg the Siamese you get now that have absolutely massive ears.

Think generally the problem is commercial and unregulated animal breeding. Our cat is just a black cat but was rescued from a scumbag breeder and the issues are the same as the overbreeding really, just treating animals as production lines to provide product.

Think cat breeds have always been less of a thing because their temperament is less breed dependent and you don’t need to factor in walking them etc, so most people are happy with a moggy. But it does worry me that that’s changing and people are more likely to buy a pedigree one now. I keep seeing ones on instagram with tiny short legs and that doesn’t seem fair to the cat to deliberately breed them like that.

I had a colleague who had a purebreed that she used to let go out and get pregnant by whatever and then sell the half pedigree kittens. One person bought one and then brought it back a few days later because it was the wrong shade of grey to match her living room.

can we just ban humans tbh

I’m constantly amazed at how much people are prepared to pay for certain breeds. A quick look at adverts near me and there are loads of puppies for sales for four grand! Mostly French and English Bulldogs and American Bullies (whatever they are).

I’d just suffer from constant anxiety that they’d get stolen.

Always find it bizarre how dog breeds go in and out of fashion- I wonder who decides how and when that happens. I can understand lots of people having dalmations in the 90s cause of 101 dalmations, but who decided a few years ago that the flat faced lads were the dog du jour? And why do they then put them on cushions and stuff?

I don’t judge anyone for having a pure bred dog really, it’s personal preference and I have to admit I’d bloody love a chihuahua. But I do think dogs like pugs and the sort should be banned (edit: not banned but not allowed to be entirely pure bred)- they literally cannot breathe ffs. Watched a documentary about that sort of thing a while ago and a vet was saying like 80% of the operations they do at the moment, bare spaying and neutering, is widening the airways of flat faced dogs. And they’re impossible to insure for that sort of thing for that exact reason, so a lot of owners have a choice of paying an extortionate amount of money for that or… the other option, which is incredibly sad.

Someone else mentioned guide and helper dogs as well, there’s a reason they’re used for certain jobs. I’m pretty sure they check and X-ray them and stuff to make sure they don’t have hip problems etc, because those breeds are prone to that.

who decided a few years ago that the flat faced lads were the dog du jour?

I always wonder this too, I think they’re dead ugly then I feel bad for thinking that because it’s not their fault and they’d probably prefer to have a long nose and legs