Rare records you own and or stories about them.

I was working in a small record shop and weekly record label reps would call into the shop or in person to sell in new stuff and check stock etc.

A rep from Pinnacle Distribution (I think) would phone every Wednesday afternoon and due to this being a weekly occurrence you usually got friendly with them chatting about music and stuff. Less of a job, more of a hobby.

So the rep (I forget his name) was asking about best gigs and the usual kind of things and my memory is a little fuzzy on this but I think Pinnacle were planning on releasing a 7" box set and LP with the same content being Wipers covers. I could be wrong but Geffen got wind of this and blocked Nirvana being included and the 7" set was not released, again I could be wrong on this.

Anyhow, turns out we liked the same kind of music and gigs and he said he’d post me the Nirvana 7". It arrived a few days later - but inside the sleeve was the wrong record. Rep phones me next Wednesday as normal asking if I got it and I just said yes it’s great, couldn’t bring myself to bring up the error. I’ve never seen this record for sale anywhere and it’s a nice curio. The title of the Napalm Beach track is oddly spooky too. 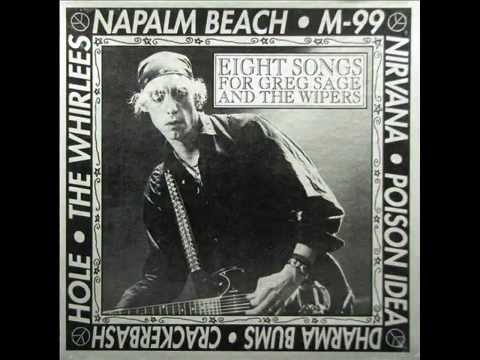