I shall add that to the list, need to read more by Banks think I’ve only read stonemouth and crow road.

Espedair Street is excellent, he first Banks I ever read. The key is that it’s a story about redemption set in a rock band milieu, not a 300 page excuse for an author to indulge his rock star fantasies (although it is that a little bit, maybe just enough, as well).

the Crucible (for work)

loved how gothic and atmospheric this was, a great mix of real political comment and juicy horror.

enjoyed this, even though it’s a bit on the nose message wise. I wonder if Michael Haneke was influenced by it or had read it, because the idea of a personal responsibility/consequences in a broken society reminded me a lot of Hidden

The Lover by Marguerite Duras

I read the North China Lover a little while ago, which was essentially a re-write of the Lover- essentially the same book tbh. still brilliant though.

The decay of the angel by Yukio MIshima

the forth part of his final series of books before he took his own life. this was a strong end to the series. we follow the rich lawyer Honda to the end of his life, as he comes across a young orphan named Toru who he becomes interested in. he decides to adopt Toru, seeing him as the reincarnation of a former friend. unfortunately his indoctrination of Toru doesn’t go as planned, and thing start to turn awry…

just started In memory of memory and it seems pretty good so far, definite echoes of Flights and WG Sebald

also, why are book covers so bloody boring these days? they are essentially tasteful graphic design, trying to cater to all audiences through sheer blandness

this is the modern version you can buy 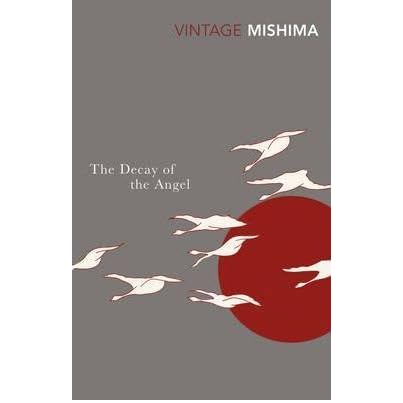 You are right, I really want to know about the top one!

Yes, you are right, about redemption and all sorts going on. As I say, I do enjoy books that really try and get behind the scenes, and try and talk about making music, trends, how albums get made etc. etc. Daisy Jones and the Six was quite good at this too.

Ripped through The Book of Koli by M.R Carey. In fact, I finished it earlier this evening and then immediately bought the second book as it is part of a trilogy I’m happy to say.

Far future, post-apocalyptic, dystopian, young protagonist, you know the drill, but there was something very special about this one. Maybe it was the writing which is in a pleasant vernacular style or maybe it was just alarmingly believable.
(If anyone has read The Bone Clocks by David Mitchell it has similar vibes to the end of that book but not as grim)

The author also wrote The Girl with All the Gifts (good film, not read)

For one thing the Vintage range is all about giving you classic books with nice covers. You’re meant to already be into the book or know of it.

If it’s beautiful, it’s bound to be Vintage

Not going to defend all the covers because some are bad obviously.

I think for modern, new books there are plenty of really interesting covers out there but I prefer the more abstract ones.

US covers often are really badly done like that top one you’ve posted. I mean it’s an interesting picture but I prefer covers not explicitly suggest stuff that might happen in a book because then I wonder about that event more than just reading it. But I also think everything else about that cover is washed out, the composition doesn’t make the picture look good. If the entire cover was that picture it would be much nicer than what we have.

Fantasy books from the US are the worst. They love to have these very very clear pictures. I mean here’s the US cover of a Sanderson

US Name of the Wind original cover

Disagree with most of what you just said tbh.

The previous cover was from google images, this is the book:

Sure the vintage collections are prevalent but that doesn’t mean all of the books are well known- just old. And a book cover like the one I posted before tells me absolutely nothing about what the book will be like. A good book cover should give an insight into the tone and atmosphere- which this one does. I know there’s references to beauty, to surrealism, to taboo sexuality. The other one offers nothing.

At the moment, with these “vintage” book covers, we essentially have hundreds/thousands of stories translated into asinine covers. It just smacks of a lack of imagination and laziness.

As for the fantasy covers, they’re a whole different breed. They’re meant to be…fantastical?

just got Interior Chinatown, Sunny’s Nights and Our Band Could Be Your Life (somehow never read it before, no idea how) as a result of this thread - pretty pleased! Though my copy of Sunny’s is absolutely an old library book someone nicked and resold

@nicholasurfe as it was your rec that made me get Sunny’s, have you read Bright Lights Big City before? Probably one of my fav NY-set books

I thought we’d got beyond having to tack IMO on the end of obvious opinions TBH.

A good book cover should give an insight into the tone and atmosphere- which this one does. I know there’s references to beauty, to surrealism, to taboo sexuality.

Fuck knows why it says that to you, I just saw a guy being tortured/drowned or possibly really into the seminal Blackadder II episode “Head”.

you’re into the Michael Bay of book covers

new tagline please for me!

The top one is intriguing, that’s the sort of cover that would make me pick up a unknown book.
The vintage one is so bland.

What do our fellow book nerds prefer?

Having a productive year by my standards:

The Amber Spyglass
1984
I, Robot
The Catcher in The Rye
The Old Man and The Sea
Farenheit 451
Lord of The Flies

Some of the penguin modern classic ones are great e.g.

Agree that those vintage ones are dull though

would be intrigued by either cover though tbf

I’ve read the whole trilogy, and enjoyed it a lot. It’s not doing anything especially different, but it does it very well. Great fun reads, where I did genuinely care about the characters (worth mentioning that it has some positive trans representation, which is (sadly) a genuine point of difference)

honestly I think they’re both pretty bad. I kind of get what @malick means about generic blandness, but there is still a lot of good modern cover art out there. Anthony Burgess’ Earthly Powers (fantastic book) in the same range as the Mishima is a good example

original paperback is better, but still a bit meh

I like or even love the design and artwork of many of these old covers, but I really struggle with the typography - I much prefer the cleaner fonts most modern covers use.

I really liked Bright Lights Big City when I read it over a decade ago. I’d like to read it again, actually. I remember loving the high-wire act of telling an entire novel in the second person narrative, which is why the movie absolutely doesn’t work

I just looked up other books that are told in the second person (that are not Choose Your Own Adventure novels), and saw The Reluctant Fundamenalist by Moshin Hamed come up. That book now ticks two of my boxes that pique my interest - interesting choice of narrative voice, and novels set within a finite period of time (here it’s one day) So I’ll check that out.

It also got me thinking about novels told in the first person plural (IE ‘we’) like The Virgin Suicides by Jeffrey Eugenides and And Then We Came to the End by Joshua Ferris.

My point here: Any other recommendations anyone, of books told in either the second person or first person plural?