Yeah finished Luster. Great writing and characters and obviously loads of stuff about being black and/or female in contemporary New York that was educational and fascinating…but TBH the story just felt like nothing new. I’ve been reading books like this for decades, although obviously in the early days they were all fairly privileged white male authors. I think maybe young people struggling against the contemporary dystopia isn’t for me really.

Just finished Blue Ticket, which I enjoyed and found to be a page turner but am not sure it was amazing. It is set in a world where when girls begin their periods they take part in the ‘lottery’ to find out if they will be a blue ticket or white ticket woman. One life is children and marriage, the other is childless and with a career. The story follows Calla and her life. 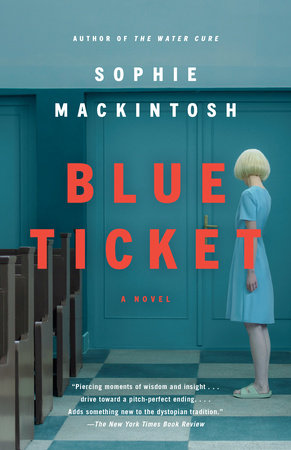 From the author of the Booker Prize longlisted novel The Water Cure comes another mesmerizing, refracted vision of our society: What if the life you're given is the wrong one? "Blue Ticket adds something...

I got quite choked up by the ending I seem to recall.

I’m now 2/3 of the way in. Would prefer it if they were there, but it’s clear who is speaking at any given time, as most of the interactions are between two people at any given point. The dog thing also plays a part (as does the naming of the characters) but I’ll happily rescind this if there’s a scene in the last part at a dinner party or something.

It’s over a decade ago, but I think the lack of speech marks is why I gave up on Wolf Hall.

there’s been a recently acclaimed novel, set over two timelines involving a missing Thai or Vietnamese woman (I think) … can anyone help me remember the name??

Favourite 2021 publication: Build Your House Around My Body by Violet Kupersmith,

Thought it was great

I loved this book - wish it had been longer.

I read Nightbitch last year - it started great, but I think it started to run out of steam as it progressed. I suppose part of it was that the conceit of the novel leads the narrative in (what I thought were) fairly obvious directions. I’d recommend it though.

why I gave up on Wolf Hall

I get the impression you just don’t like dogs.

I’ve been working through ‘To Paradise’, the next book from Hanya Yanagihara (author of A Little Life). I’m enjoying it much more than A Little Life - it appears to be three novels (novellas? Part 3 is 400 pages long) which are thematically linked - all set in the same location, characters with the same name, similar relationships, etc - and each set 100 years apart.

So far I’ve read the first part, a 200 page story set in an alternative past late 1800s - the story itself is familiar (bog standard love triangle), but it’s written beautifully. Part 2 is set in the 1990s, - I’m about a quarter through, and again it’s nothing new (young man-old man relationship, worker-boss relationship), but I’m really enjoying it.

So far it’s avoided degenerating into the misery-fest that was A Little Life. It’s melancholy, for sure, but it’s much easier to stomach.

Have just finished reading a couple of the Costa winners this year, Unsettled Ground by Claire Fuller and The Crossing by Manjeet Mann. Both good, both really moving and pretty depressing. Unsettled Ground I could have given it anything from 2 to 5 on GoodReads depending upon my mood, really struggled to make up my mind about it. Gave it a 4 in the end, decided the really good stuff outweighed the other stuff.

Also just read The Lighted Window which @nicholasurfe mentioned a while back. It is about the feeling you get when viewing a window with a light on in the room beyond when out on an evening walk, and then this is a jumping point to talk about paintings (mostly) and literature. Again, really good, but maybe not quite what I was wanting it to be. I think I wanted it to be more walking/psychogeography and less art history but it is worth a read if you are curious about it. Loads of lovely colour prints of the art being talked about, too. Amazing depth of knowledge the writer has to come up with so many examples to fit his theme.

I really appreciate that you read my suggestion and checked it out. It sounds like my expectation of The Lighted Window is the same as yours. I will eventually read it, but as I was hoping it would have a bit more focus on the psychogeography, but I guess with a book written about such an extremely niche topic, I guess we can’t complain too much about what the writer focuses on. I guess it at least scratched a bit of an itch. Having just forked out the equivalent of 25 quid on importing a copy of Patricia Highsmith’s diaries and notebooks as a birthday present for myself, I’m reluctant to cough up the same for The Lighted Window right now.

I guess I kind of liked Nightbitch. I mean, I like ambiguity and I liked the fact that there are three levels of ‘what exactly is going on?’ that the last part presents.

Going back to how I first heard about this book. I can totally imagine Amy Adams reading this book and going ‘OK… movie of this?’ but I can’t imagine how this book would work as a film, unless she can entice Julia Decournau to work through it, and even then I don’t how Hollwyood could get away with including one particular part and get away with it.

We have loads of “little free libraries” and book swap places round here as well as regularly hitting up National Trust book shops, and I’ve formed a habit of picking up every cheap Dan Brown cash in I can. Pure literary junk food. Maybe I should blog my reading of them. Ban on books that have to give you a list of who’s who.

Does not bode well as a light read. still on for whale club?

was going to make an early start tonight but thought I’d dip into something else first.

What about you @hardworking?

Finished the football book, starting The Slow Regard of Silent Things tonight

They’re very useful for the Malazan books and some other fantasy ones. What book is this?