Every year, without fail, some music critic somewhere declares that rock is dead.

I predict that we’ll see 2017’s first by the end of this week. It’ll be a reaction to the Coachella lineup.

The hand-wringing kings at Stereogum get VERY CLOSE to declaring the death of rock, but don’t quite get there: Get In Formation: Some Thoughts About The 2017 Coachella Poster

I really dislike Stereogum, I really should stop going there.

Coachella line up was a good shout. See also: reactions to the BBC’s Sound of 2017 poll whenever that comes out.

This is true. I still drop by NME.com every so often for the same reason.

It might not be dead but its passed retirement age. As a genre it really has lacked any relevance for at least a decade, possibly longer.

So they’ve been saying for at least two decades. And yet, here we are.

It’s funny that the WardrobeGruber should say that “as a genre it really has lacked any relevance”, because “relevance”, or lack thereof, appears to be the crux of every single annual “rock is dead” article.

Nobody has ever provided a satisfactory explanation of what is required for an entire genre of music to be considered “relevant”. The best anyone can ever do is either:

Ah nuts, I’ve lost. I’m making the same counter arguments I find myself making every year, except this time I haven’t even got a think-piece to react to. Yet.

Relevant to me means influencing mainstream. Using your example of punk, the bands of 1976-79 undermined the old order to such an extent it allowed the following post punk movements to breifly merge the underground and the mainstream together and dominate charts particularly the years 1980 to around the middle of 1983, in a way I’ve not seen since with the possible exception of the rave period of 1989-91. To me the last truly influential rock band was Nirvana after which the genre ran out of ideas and began digging through the past to try and recreate what had gone before.

And there lies the problem, rock is the music of the past both in its influence and since the advent of the internet, downloading and streaming in its easy accessibility - why put effort into something new when you are able to access the original. In tandem with this rock has long lost its rebelliousness, which I believe dates from Band Aid and Live Aid in the mid 1980s, a mantle taken on by hip-hop from the 1990s.

Rock will still exist it just isn’t very influential any more and I can’t see it changing in the future. Agree that music is for everyone and that young people do still listen to it (Even had a conversation with a 12 year old recently on why Bryan Adams - Summer of 69 was his favourite record, and equally had a 14 year old talk scathingly about ‘old music’ in the aftermath of Bowie’s death). There is some truth in the latter as rock can be seen as old music.

As a postscript I’m in my 50s and punk and post punk were my first loves musically.

Depends how narrow you definition of ‘rock’ is. Bands with guitars and drums are still pretty popular last time I checked.

Well then you are just arguing about semantics.

What I meant to say is: Prior warning - TL;DR

Seems to me what the “rock is dead” narrative complains about is that rock is no longer that genre which simultaneously enjoyed humongous chart success whilst also often being one of the more experimental and innovative forms of music. However this has pretty much been the case since the end of the 90s hasn’t it? From the beginning of the 2000s commercially succssful rock/indie tended to be very backward-looking (though lots of it was still very good), whilst more innovative stuff would fail to chart (but might still build a substantial fan base).

So whilst it observes something that does seems to be really happening, the real question is whether the “rock is dead” brigade are simply overstating their case. I’d say that by almost any any criteria other than humongous record sales ‘rock’/‘guitar’ music is still in fine health, if not the cultural behemoth that it was in the second half of the twentieth century

Are good/great rock records still being made? YES

Are there still rock records that could be said to be pushing boundaries/expanding the genre? This is a little more up for debate, arguably rock has tended to be more derivative than in previous decades, but I still think innovative and fresh rock records are being made.

Should record sales really be the metric by which a genre should be considered ‘relevant’ or ‘influential’? of course not

Did any of what I just wrote make any sense? Probably not 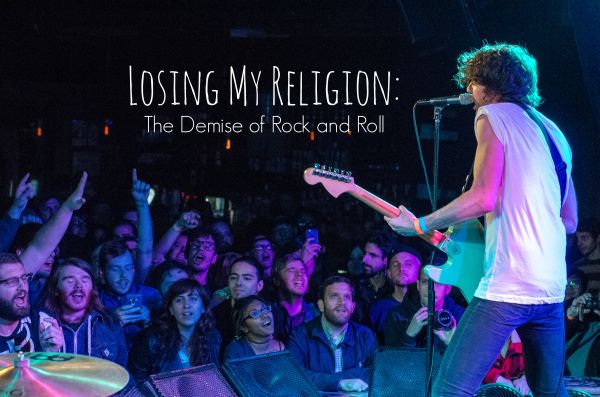 Losing My Religion: The Demise of Rock and Roll

Japandroids, Cloud Nothings, Real Estate, and others contend with a genre’s never-ending death.

This is a virtuoso bit of pointless naval-gazing, as it manages to riff on the death of the album at the same time.

How fucking long is that article