I’ve just started reading a history of the 30 years’ war called Europe’s Tragedy. Only about 50 pages in, it’s very in depth so a bit of a trudge to get going with but it’s exciting learning about something that I don’t have much background knowledge of at all.

Been learning more about the Tudors in recent years too. Started with reading the Hilary Mantel books which got me interested, but have recently listened to a fuck load of episodes of The History of England podcast, which is currently doing Henry VIII. So many great characters in and around the story of Henry VIII and such a turbulent and important episode in our history. Love it.

So yeah I’m pretty Medieval/Early Modern and Eurocentric at the moment.

I’m also interested in micro-history books - that focus on a very small event or theme rather than wider topics. Half way through reading this book about a mountain hiking tragedy in Russia in 1959. 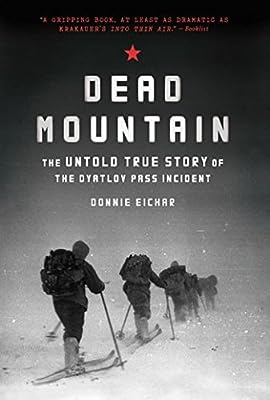 OK that’s boring enough for an OP, now you chat about history too please.

Been reading a bit of montefiore of late so russian history, mainly that around the romanovs and Stalin. Fascinating stuff.

cool, completely untapped gold mine for me there. (History’s great like that isn’t it, just never ending amazing stuff to find out about).

Few African civilizations are as mysterious as Punt. Historical accounts of the kingdom date to around 2500 B.C … The Egyptians are known to have sent huge caravans and flotillas on trade missions to Punt … yet they never identified where it was located. The site of the fabled kingdom is now a hotly debated topic among scholars.

have read barely anything since I finished my history MA. feel a bit guilty about it for some reason. especially since I’ve been toying with the idea of doing a phd at some point maybe

that’s some pointless musing for you

since I finished my history MA

Got this song in my head now

(fuck that’s a lot longer than I thought)

sounds like a pretty natural gap after intense study. what did you study?

Studied Archaeology along with a few modules of History in university. Went on a huge WWII binge around 2013/2014 but have slacked off since as it was too intense, same with when I was reading about the Spanish Civil War.

Starting to get back into it now and have a book on the Moon landings on the go, with a book about the Vietnam war ready after that and then a book on the Warsaw ghetto. My Dad called me the other day and said he had a 650+ page book about Mao for me so let’s what that’s like.

the thing I was most interested in was history of science, so did as much of that as I could. my dissertation was about a specific aspect of 19th century evolutionary theory. lot of Darwin, Alfred Russel Wallace, and many people who’s ideas were wildly wrong and weird

I did a bunch of other modules, one of soviet russia which was really good but I didn’t really try very hard /didn’t know much - because it wasn’t what I wanted to do (the modules I did want to do weren’t available that year, which didn’t make me very happy)

Watching an 18 hour doc on vietnam.

I’d forgotten all about the competing theories of evolution. I did an essay on it once at uni. Can’t remember anything really but yeah remember thinking that some of them were obviously just mad guesses.

yeah it took really til the late 1910s or later / the modern synthesis for natural selection to be widely acccepted as the primary mechanism of evolution.

think my favourite was orthogenesis - and Theodor Eimer in particular, who’s ideas are completely bizarre. he seems to have come up with most them because he was pissed off at a different biologist who was his former colleague (this is definitely not wildly simplified)

resurrecting this because i always find myself getting absorbed in history around this time of year. perfect weather for chilling in the garden and having a read or listening to a podcast. anyway war nerd have done a 2 part episode about the 100 years war and it’s amazing how we don’t learn anything about it in school, considering it’s one of the 2 or 3 most cataclysmic events in the history of europe.

anyone got any further reading recommendations on the subject?

Hey don’t know dnythjng about the 100 years war. Is it Henry V? And not really an ongoing war? I could google this I suppose but I like that the thread was resurrected.

I’d like to be in a book group where you all actually read a DIFFERENT book about a historical topic and then chat shit about it.

all at the same time too, to separate the serious buffs from the toe dipping nerds

I’m probably somewhere in between tbh.
Don’t understand what you mean tho- yes at the same time that’s the point?