First off, it’s my duty to point out a new episode of OSW out today, covering the Lex Express and USS Intrepid Yokozuma bodyslam challenge!

Now, of course, January is quite an important month with two of the biggest wrestling events of the year happening over the next few weeks, namely Wrestle Kingdom 13 and the 2019 edition of the Royal Rumble! After that, we’ll have the elimination chamber and then the run-up to Wrestlemania (which will get a new thread, of course)

So yeah, not bad at all. January 4th if you didn’t know!

Only thing booked for Royal Rumble bar the titular matches are the main event of Brock vs Strowman for the world title (meh) but given it’s the 27th January.

Elsewhere I caught the end of RAW last night and Ronda vs Nattie and Rollins vs Cobin were both pretty good. Tonight on Smackdown can Rusev catch the U.S title on Rusev Day of all days?! (Smart money is on yes!)

oh and women’s tag titles have been confirmed! I assume they’ll get crowned at Royal Rumble

Women’s tag belts seems like too many belts to me, there’s already too many mens belts and the tag titles seem like an afterthought (especially the Raw ones)

That’s good, it’s a tricky balance with such a big roster tbf, too few and it seems like loads of wrestlers don’t matter, too many and the titles seem like they don’t matter

Women only have one title per brand atm though - could do with an extra mcguffin to fight over really.

Watched that OSW before bed last night. One of my favourites of late for some reason.

That’s fair, Sasha and Bayley in particular seem to have been standing still for the best part of year at least.

As I said, it’s an incredibly tricky balance

I thought Meltz had said that wasn’t happening. But y’know Vince will decide to do it 5 minutes before a Raw.

Taking about Wrestle Kingdom. Imagine having Ospreay/Ibushi as yr opener. I hope they get at least 20 minutes. Probably should take Cody/Juice Robinson off the card and get Minoru Suzuki on there somewhere. Have him squash Juice

Don’t even try to bull shit us brother HH https://t.co/e9ioUpVzDJ 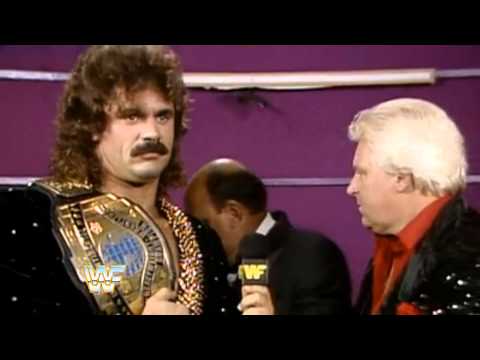 Aw that’s a wee shame but he had some innings

So AEW has a billionare life long wrestling fan backing it. Innnnnnteresting

It’s quite exciting. Seems like they know what they’re doing better than Impact ever did. Cody and the Young Bucks have proven they can draw big crowds. I’m sure Jericho would love to be their version of ECW Terry Funk, using his name to build the company. Looking forward to what’s gonna happen. I think wrestling is gonna get real good, real fast.

Feels like it’s just going to be a lads backslapping club. Will probably hurt ROH massively

the GOAT. always loved the dynamic he had with savage, mean gene somehow managing to play it completely straight while this ludicrous cartoon man does prop based trash talk

Gonna try stay spoiler free until tomorrow morning when I can watch.