stage-wise they don’t have much to play with at Prestatyn. They have a big airy food court stage (which was generally pretty bad at ATP) and a typical Butlins main room which is good. All the other spaces seemed too small and only really suitable for Q&As/film screenings. I hope they use the main room for as much as possible. To me, the line-up looks pretty balanced.

You’ve been to prestatyn before? Nice. I hear it is closer in feel/age/facilities to camber sands then Minehead? Also, in terms of site layout, what kind of distance are the furthest chalets from the centre? Can’t find a site map online anywhere. It was always a relief at Minehead to find you were quite close, for the My Bloody Valentine one we were right at the back and the walk in the winter chill got a bit annoying…

More Camber Sands-y. Pretty run down in the main, but the chalet I was in was nice. It’s a pretty tiny site - think I was in one of the furthest chalets from the venues but it’s really quick to walk to and fro. I actually think Prestatyn is the nicest location of all of them. Arse to get to, tbf, though.

I got some Super Early Bird spaces to get rid of. Stupidly told a couple of friends who had intended to come over to the DLJ ATP from Canada and got screwed that i’d get a chalet with no obligation on their part. That and a former DiSer, who would have filled out the 4 person chalet, is in a sorry state at the moment. Needless to say, got a 4 person chalet and 3 spare places. So £140 pp…anyone interested? Might even be open to selling the whole thing…

Possibly! Will be quite last minute if i do but will keep this in mind.

Okie dokie, Will probs bump this at the start of April and then actively start trying to fill it out by other methods.

£50 odd. Also £10 each way to Chester. Which is then cheaper and an hour quicker to Prestatyn. Fucking idiot. 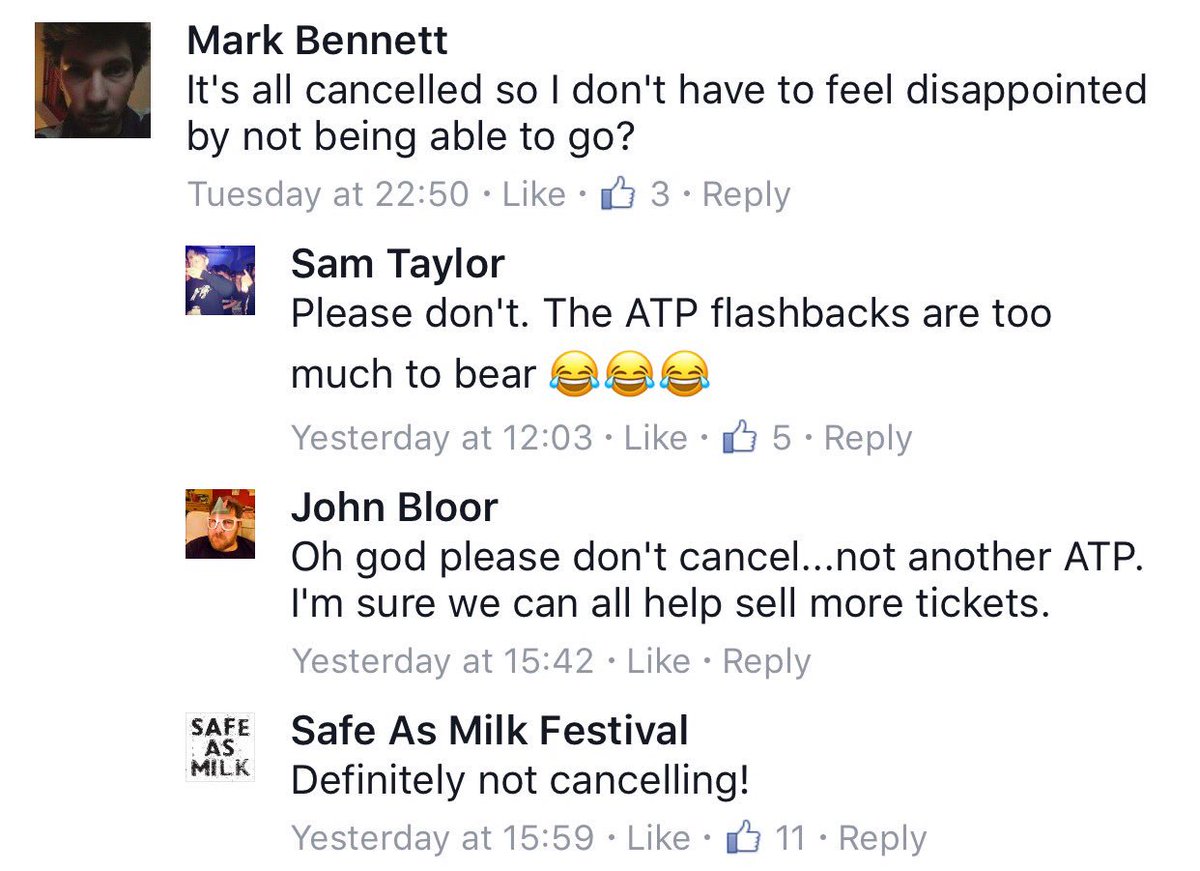 Not to say they weren’t at fault, but if ATP had just given up when they should have years back, there would have been so much more uptake for this. Everyone I spoke to who was interested was waiting it out to buy tickets with the assumption it would get cancelled.

Didn’t sell enough tickets. I thought they were sounding increasingly desperate on Facebook - promising all these bonus amusements and competitions. I guess most Butthole Surfers fans are accountants and lawyers themselves nowadays.

I thought the lineup was great but I was definitely holding off buying tickets as I’d been burnt so many times with ATPs. I guess a lot of people were the same. Shame.

oh fuck, that’s sad. i’m too broke to go but did suspect they’d struggle to sell a lot of tickets with that lineup. gutting though.

barry hogan is having a little chuckle somewhere today

oh gawd, I was going to go to this, I think I sort of thought ‘they’d never stage it if there was any doubt they could carry it off’. Which is stupid.

I’m sure all the above stated reasons are pretty likely, though I wonder if it suffered from the lack of a real marquee bums on seats headline act (easier said than done obvs) and the location putting off the large number of potential punters who live in That London.