Yes this seems a very strange decision and it will not look good. 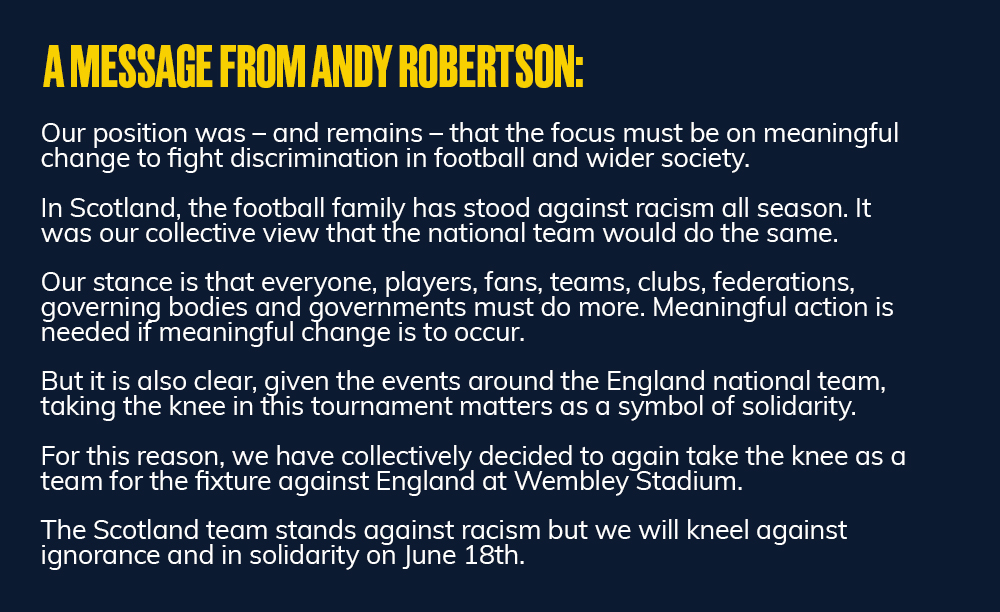 Sooo…they’ll kneel in solidarity with England players but not for… y’know solidarity the rest of the movement.

Yeah, I’m with you on this Unlucky. Good that they’re taking the knee at Wembley but just fucking do it all the time! It’s a universal sign of solidarity and this kneeling at one game but standing at others feels like a total cop out to me.

Yeah, just do one or the other, and keep it consistent.

Teams like Motherwell and rangers stood before games towards the end of last season, so it’s not a new thing. Think it started after the rangers player was racially abused during the uefa cup.

Wembley is going to be toxic. It won’t happen, but when the boos ring out I’d love to see a player, or a team, or both teams just walk off the pitch.

Yeah, I agree to a point - at least they’ve recognised that it would be a shitshow against England so it’s a start. Not sure what my feeling is on taking the knee tbh especially given where the conversation is being derailed to now, so I don’t think I’m so bothered about consistency.

Right, wasn’t aware about domestic teams doing it, fair enough. The shit Kamara had to go through was inexcusable.