Did we already have a thread? Can’t find one.

Properly freaked me out. My recurring dreams are about finding secret rooms in house.

All i can think is someone creeping about in there 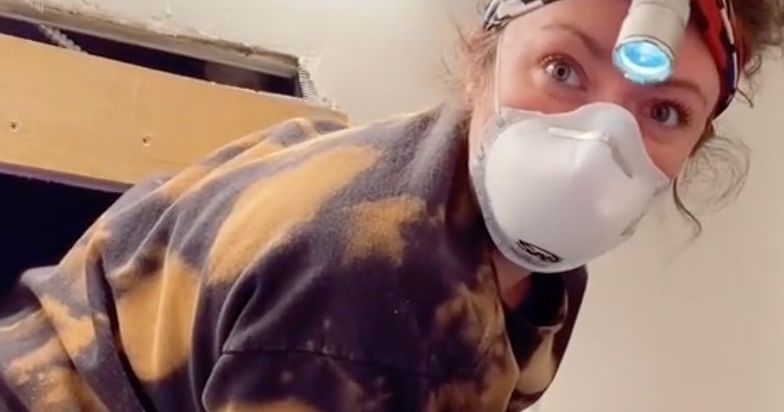 “I was kind of expecting there to be somebody.”

i’ve got a fire escape that takes me into the nextdoor neighbours landing. got a little smash glass thing and you can see when they’ve got the light on.

it used to have a door covering it but i got rid cause it was a weird door but i should probably put one back there for a bit more privacy.

Yeah this is scary, gonna try to push it out of mind as this is the sort of thing I can fixate on and start looking around my attic with a torch in case someone or something is living up there.

@marckee brought it up yesterday

Click through to see the rest of the thread

Gotta admit, for the first two videos I was beyond hooked

My recurring dreams are about finding secret rooms in house.

Same! Constantly having dreams where there’s some whole extra wing to my house that I’ve somehow missed and that just needs a bit of doing up.

Cripes this reminds me of staying in one the massive old Navy houses in Portsmouth dockyard when I was about 10. Family friends lived there as the dad was based in the dockyard. We had a floor to ourselves, even had a little library in it. In the corner of the room was a cupboard, if you went in at the back was another door, if you opened that you were in a cupboard in the house next door. We briefly poked our heads round the door but didn’t enter, that would have been a bit naughty…

They’re really conflicting dreams for me, I love seeing what kind of interesting secret space my brain has come up with but even though nothing sinister ever happens it always feels as though it will. Is it the same for you?

Ah I only venture in once a week

Strong ‘House of Leaves’ vibe to all this.

I think it deserves its own thread.

I used to live in this weird building that was a couple of shops on the ground, then two storeys of offices then one flat only. Halfway up the stairs to the flat was a fire escape door serving the offices which after a few months we discovered was always unlocked. We used to sneak in all the time and make ever so minor amends to mess with them; move a file, or open a drawer or whatever.

Yeah, they’re always dank, poorly lit, poorly maintained etc. but my optimistic little brain can still think, ‘bit of paint and we can make a nice space out of this!’. Basically Homes Under The Hammer but slightly haunted.

Usually some sort of surreal aspect to it too, when I lived in a flat that was particularly strong as there was no logical place that extra space could go really, so it’d just be hanging or floating somewhere which just added to how unsettling it was.

Probably not helped by the fact that my old flat genuinely had a massive loft space above it, but you could only reach it by bending your body around a skylight to get there and I was always worried I wouldn’t manage to get back.

Thought this was gonna be about xylo’s sex dungeon

London Rental Opportunity of the Week: A $4 Million Fuck Dungeon

What else are you doing with your basement?

Mine are always surreal and really grand houses, or almost like other worlds.

It was who I immediately thought of too.

My dreams are much more mediocre than that. I should probably join the Lib Dems.

My friends moved into a big top floor flat in Leicester, in a building that had been a big Manor House and was now subdivided into flats. Their door was to the left and there was another door marked as like “Fire Door, do not enter” to the right. So the day they move in, they have some pals around moving stuff and having beers, and once everything is in place, they decide to go out to celebrate. Returning to their new home at about 2am with pizzas in hand, my friend spots a little door about a foot high and a foot wide in the wall next to their front door so she opens it and there’s a short tunnel that opens out into darkness. Giddy and drunk she starts through the tunnel shouting away over her shoulder about her progress:

“There’s a secret tunnel! I’m going through! Oh my god, there’s like a whole room in here! Hey, we’ve got another room in here!”

She stands up and just as the room begins to come into focus she hears an unfamiliar voice shout back:

Realises she’s just shoved a sofa aside and is stood in her neighbour’s living room dropping pizza crumbs and shouting “a secret room!” in the middle of the night.

Apparently the next day their neighbour introduced herself, the original fire escape of the building was actually through her living room, hence the sign on the the door and ability to tunnel into it. They had a chat and a laugh and then she was like “btw, please do not enter my home again.”

Wow that video is annoying