Anybody excited for this?
New track is very nice—I’d be well up for an album in this cratedigging style

Nice track. I’ll have to give it more listens. I stil haven’t gotten around to all of their albums but I do like Black Up and parts of Lese Majesty.

Psyched for this. Love Shabazz Palaces.

Awwww shiiiit. Had no idea they had new material coming out. Delighted.

Looking forward to this. Nice that it’s come from pretty much nowhere too. What do people think of Lese Majesty? It’s still a weird one for me; one of those albums that opens with all its best tracks (excepting, I’d say Ishmael and Motion Sickness in the middle and towards the end) but loses steam as it closes.

I think it’s very good. Know what you mean about it losing steam. but for me they’re/he’s one of the few hip hop acts that can still craft an album that I can listen to front to back.

Went to see Digable Planets a few weeks ago. Got me revisiting those albums. Hold up well.

This has leaked already, feels like that hardly ever happens anymore.

Damn. Feel bad for them (but also happy for us)

Just listening now. I don’t feel too bad about it.

Christ this is good

Love it. Apart from that one with The Model chorus.

Why have one album when you can have two 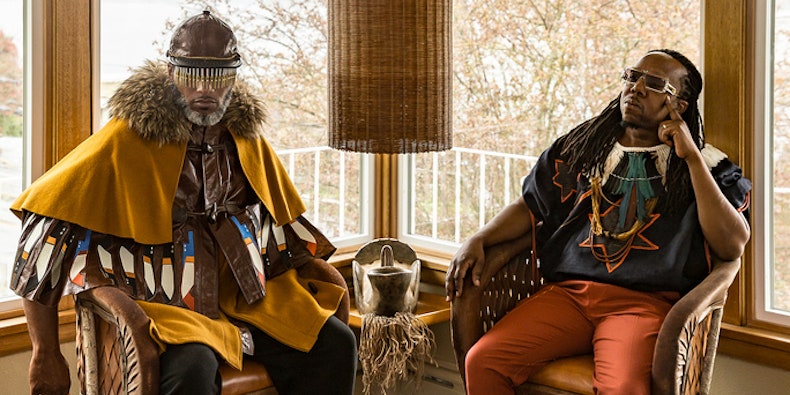 Quazarz vs. The Jealous Machines is the “extra-spacial twin” to Quazarz: Born a Gangster Star

2 Shabazz albums to look forward to this year you say?

V, v excited for this. Not totally sold on the new track to start with but I’m sure it’ll grow on me.

Seems like a track that could fit super well within the context of the full thing. Doesn’t really stand on it’s own as well as Shine A Light imo, but that’s okay.

Yeah, would agree with that, buzzed for both albums.

I hope there’s some extravagant box set with both albums, more than willing to drop some dollars to support this group, I love all the effort they put in to having a bit of mythology and mysticism in their music and personas.