Anyone watching it? It’s good, innit? Thought despite an interesting concept and decent start some of the praise for it after the first episode was a little overblown, it’s developing into a really good series though. It’s nice to have a murder/crime show that isn’t about a death of a young woman for a change, and seemingly knowing who the killer is has allowed the social, historical and political elements to come to the fore, and the cast are doing really well with it.

Dunno whether David Morrissey is ever in anything bad tbh, and Lesley Manville’s been great too - that scene at the end of the last episode with her and her sister either side of the wall was so well done. Probably the best British series since Happy Valley, which this has definitely taken inspiration from.

(Episodes are going out nightly rather than being dumped in one go on Iplayer, so while there’s no harm in spoilers they might not be as necessary as usual)

Never heard of it, but glad it sounds like it’s not yet another bloody Robin Hood

Dunno whether David Morrissey is ever in anything bad tbh,

Yes it’s excellent. Oozes quality and the cast is jaw-dropping. All of them have been great but I’ve been particularly taken with Claire Rushbrook. She’s just incredible. Ridiculous talent.

You’ve absolutely nailed it about knowing who the killer is. It simply allows the show to be about the believable characters and the local history. It shan’t get bogged down by some annoying wafty whodunnit plot which we’ve all seen hundreds of times and will forget within a few days.
This is made to endure I feel.
Class.

Seen three episodes now. Love that it’s being eked out. Perfect show for that.

Just me who doesn’t think one of the killers has already been revealed (only seen two episodes so far though)? Been excellent so far, enjoying how it’s slowly bringing all the characters from the wedding together. Forgot how good Robert Glenister is as well.

I’ve accidentally seen the second and third episodes and it seems pretty good but I missed the first episode so I’ve been slightly lost. Must go back to it.

Kind of is though.

Forgot how good Robert Glenister is as well.

Yeah he’s stealing it a bit isn’t he. Making Morrissey look a bit wooden, which is probably unfair because I suspect wooden is part of the part.

Also it can’t have hurt that in the battle of weird scheduling last night it was up against weird Suspect with weird James Nesbitt with his weird eyebrows and its weird clunky script.

Think the second and third were better, first is pretty vital for setting up the historical context (which you might already know tbf!) and the relationships between the characters though. Worth watching.

10 mins before the end of ep2 I was concerned that it was going to be a 4 part series stretched out over 8 (The Staircase, anyone…?) but then -

And last night’s was excellent, adding layers to the characters’ back stories: the fire, the spy, the affair between Glenister and Morrisey’s friend/colleague, the NUM/UDM feud. I know the area it’s set in very well and it definitely captures the spirit of it. Very much looking forward to seeing how it plays out.

Seen it advertised and forgot about it until I saw this thread just over an hour ago. First ep down and, yeah, it’s pretty damn good.

Never heard of it, but glad it sounds like it’s not yet another bloody Robin Hood

There is a man firing arrows tbf

Really really enjoyed this (watched 2 episodes so for)

The wedding was funny though, couldn’t work out the timeline

Tory Sheridan was out canvassing (on her wedding day?!) whilst Dave morrissey was at a police awards dinner which finished before the church service ended? then they all went to the reception and got home by like 8.30pm in daylight?

Took me ages recognise Stephen Tompkinson when he showed up looking like Billy Connolly.

I do like Stephen Tompkinson but his accent is always the same, wherever he is supposed to hail form. He just does ‘generic Northerner’ every time

Recognised him immediately but then doubted myself and had to check 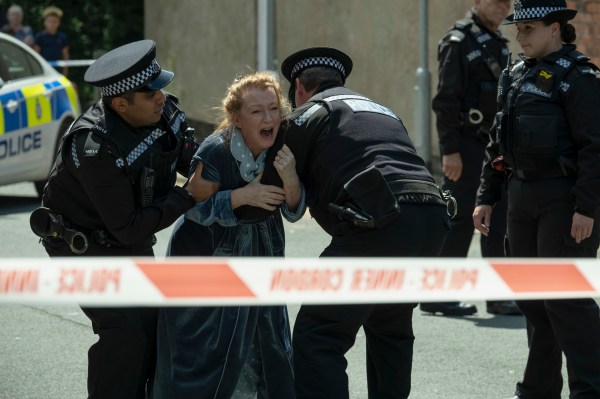 ‘Sherwood’ Renewed For Season 2 By BBC

The BBC has greenlit a second season of Sherwood from Brexit: The Uncivil War and Quiz creator James Graham, immediately after the conclusion of the first. The first run of the whodunnit thriller e…

Enjoyed this on the whole

think the actors held up the plot a little bit

It sagged in the middle (when it was crime-plot heavy) and picked up at the end when it was more character driven.

No qualms that there wasn’t a mega cool twist, absolutely fine without it and defnitely glad there weren’t any deus ex machina finishing moves.