Single Song Thread (SST): The Past Is A Grotesque Animal - of Montreal

Genuinely one of my all-time favourite songs. One of the few songs I’ve cried to hearing live at Koko.

After the end of a very long term relationship, Hissing Fauna absolutely connected with me in a way I needed at that time. The song that really drove it home was this one.

The perfect divide of the two halves of the album. The visceral lyrics reading like wild diary entries. I’d never even heard of Georges Bataille before, but Story Of The Eye will always be associated with Swedish festivals to me.

The way his voice breaks on “The mousy girl screams Violence Violence!”

The moment that the backing “ooh ooh oohs” start for the first time shortly after. 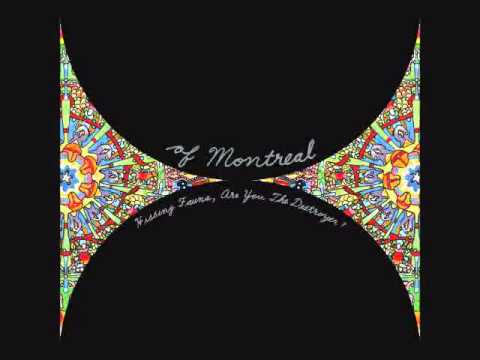 Such a simple song really, can’t quite explain why it lands as well as it does. Kevin Barnes never did better imo

The only song I’ve ever heard by them, and I did like it a lot but for some reason I knew this:

would be the case so I’ve never listened to any of their other work.

I have a soft spot of of Montreal, and think people are unnecessarily harsh on them. It’s true they’ve released some trash, but have released some absolute gems in between. They just struggle with quality control.

At the very least I can’t imagine only hearing this song without the context of Hissing Fauna. Its position is part of the appeal for me.

Love the guitar sounds like screeching cars in the intro. Often think of it as someone hearing the baseline, realising what song is about to be played and then driving their car as fast as they can to get there and hear it. Doesn’t really make sense, but it also makes complete sense.

Honestly can’t think of a song that better lyrically represents the end of a long term relationship.

You listened to this song?

I mean, this is a single Song Thread and you come barreling in here with an opinion about the band’s entire output?

Not in this thread!

Yeah, me neither. I also think he nails MH frustration pretty well on heimdalsgate like a promethean curse. Such an amazing record.

Never heard it. Will listen tomorrow

Agree with this, they are REALLY mixed but their best work is excellent

Great song! And probably the only song of theirs I would listen to the the year of our Lord 2022.

Saw them live once around the time it came out, and they played it in full.

Big fan of long songs. More bands needs to have long songs. I don’t know if they have one, but if the Ramones had a ten minute long song, I promise you it would be my favourite Ramones song.

I’m not a fan of long songs in general, I think usually it happens when people aren’t good at editing their own work. Same with films, books, drownedinsound posts… But sometimes it’s needed.

Oh is this a running series?

Haven’t listened to this track in >5 years, so I may put it on this evening. I was obsessed with it at one period; easily the best track on what is a very solid indie-pop album. I’ve lost interest over time, though, and Kevin Barnes can be a bit much

I really really can’t stand of Montreal (and tried a few times), but this is a stone cold 10/10 classic song. Complete masterpiece.

Oh is this a running series?

Yeah, this is the second one ever!

Now this is the kinda reply this thread is for

really can’t think of another band where I am actively repelled by the rest of their catalogue (and not in a one hit wonder type way) in such a way. I have seen them live twice, once at ATP and once at another festival when they were touring shudder Skeletal Lamping. The SL show was hands down one of the worst/anger inducing performances I’ve ever seen.