That’s hardly true is it? I thought it was the weekend before St Patricks day?

The weekend after Paddy’s day wasn’t it?

When did lockdown begin in the UK? - Full Fact

But still, sure, why not.

It’s 51 weeks yesterday since I was last in the office.

Ah I think my work moved us a week early.

Crazy I was at a big family party the weekend before everything shut. 60 people in one room, seems crazy now. Unfortunately I was sat next to the irritating cousin (who said something very very racist about Chinese people)

went into the office a few weeks ago to collect my stuff and some walkers squares. Gave them to my children thinking their best before of May 2021 was amazing. Was actually May 2020. Boy said “these are the best crisps ever” AND nobody died.
#BBELIES
#Offwhenitsoff

I thought it was the weekend before St Patricks day?

The weekend after Paddy’s day wasn’t it? 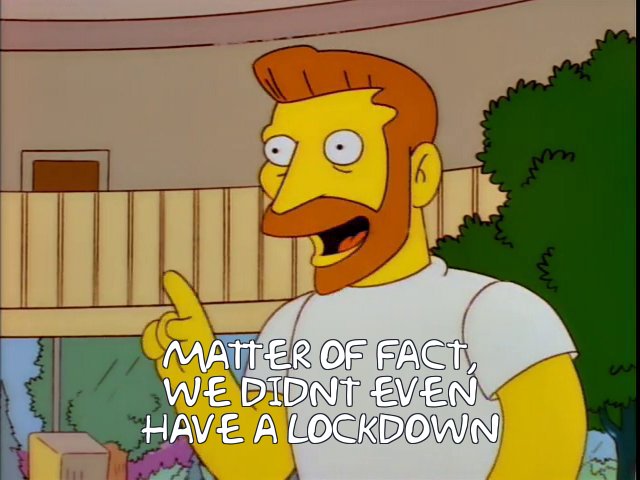 I was at an Orbital gig on the 14th. That was a bit

Was that the AVA gig that went ahead though people were asking for refunds because Covid? Ropey enough

It was. We had people over from Ireland or we would have just not bothered.
Saying that I have never seen people so conscious of washing their hands at a rave before

my last gig was March 6th (one year ago tomorrow!), and my last cinema trip was March 9th.

Can’t believe I went to this

Iirc wasn’t the issue with early lockdown that places were advised to shut, not told to, meaning they couldn’t claim on insurance. Then a week after everywhere shut the govt made it illegal to be operating?

I know a lot of theatres got ratfucked by this, maybe doesn’t apply to gigs and that

i was at a Junior Brother gig / Analogue Catalogue documentary screening on the 15th, which felt a bit weird. hardly anyone turned up so it was quite socially distanced in the end up, tables all spaced out and hand sanitiser available, but it felt a bit eerie and sad, everyone knowing it would be the last gig for a while. i think this was in that window after gigs in ROI had been banned but before gigs in NI/UK had been, so it felt a bit wrong, but it was nothing compared to the crowded pubs i walked past on the way there.

Last day in the office was March 16th.

Calendar tells me I went to the cinema ten times in March, including on the day they closed (17th).

Also definitely went on the pub a lot that week, including an ill-advised mini crawl around a very quiet Newcastle city centre on Friday 20th. Stunned I didn’t get Covid, really. Stunned.