The sound out of my TV works, but is nothing great, so I’ve started toying with buying a sound bar. I’m torn between not wanting to spend a decentish chunk of change on something that’s going to be a marginal gain at best, and then thinking that if I’m excited about films and games in 4K I should be paying attention to the sound as well. I had a quick look online and instantly fell down an audiophile black hole that I backed nervously out of. Are they worth it? Any advice / recommendations? (fwiw I have a 40" TV in a smallish lounge)

We’ve been thinking about it for a while the in-laws have one and it is very good don’t want a massive boxy subwoofer though. I look forward to the suggestions in this thread.

I bought a Sonos beam recently and I’m happy with it. The sound quality is a bit improvement from my tv and it has some nice features like speech boost and night mode.

I’ve got a Sony HT-CT390 which sounds fine but I got annoyed with it because it only syncs up about half the time. Could sometimes get .5 second delay from mouth movement to audio. Very distracting obviously. I guess it’s a Bluetooth issue

SONOS beam looks good and I think I’d give that a go.
Do you have any syncing issues, Bandy?

A good one makes a massive difference to me, currently got a loan of someone’s Samsung Harman Kardon but gonna buy a Sonos beam when I have to give it back. Think it is one of those things that you do not think you need, but once you have one it is hard to go without.

I have a Yamaha thing that I bought for about £100 about 5 years ago and will probably keep forever, as I cant ever see me needing or wanting anything more substantial. Hopefully the standards/connections don’t change and it’ll last for decades.

It’s good, much better than the tv sound.

Seeing as this was only born out of experimental curiosity, in the end I went for the cheapest one I could find with reasonable reviews, which turned out to be this: 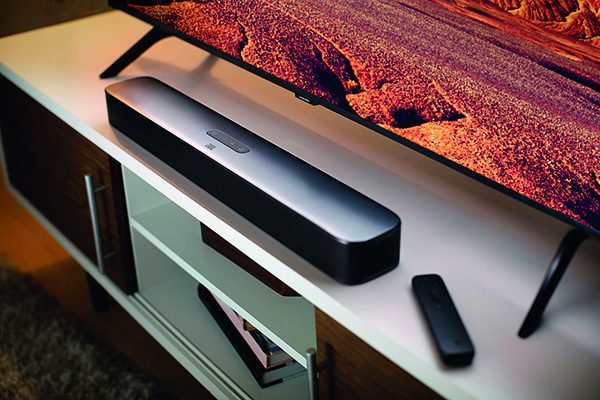 With the Bar 2.0 All-In-One, JBL takes the concept of plug-and-play to extremes.

It definitely sounds a lot bigger and meatier than the built in TV speakers, happy with the decision to get one.