Let’s talk about Outkast - Speakerboxxx/The Love Below in this thread.

Hadn’t listened to either for a while but am just midway through a Love Below listen at the minute and it’s properly bonkers isn’t it. Nuts that it spawned one of the biggest singles of all time and that the entire project exists at a time when Outkast were huge.

Talk about it now if you want to.

If i never hear Hey Ya again, I will be a happy man.

A short while ago I made my ideal single album version of this excellent album. 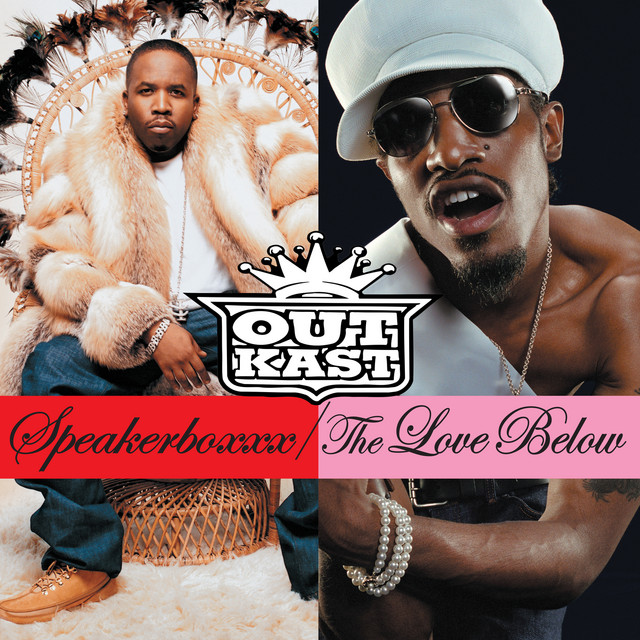 I hope you find this beneficial.

I have ‘Followed’ this playlist and will listen with interest

Think most music nerds were all like yeah Speakerboxx is defs the more innovative of the two. In hindsight, The Love Below is the one that’s gone on to be more influential and sounds more “modern” today. Still, it’s not necessarily the better record for it. A bit like 808s isn’t Kanye’s best record but it’s arguably the most influential one.

My sister got it for Christmas one year (I must have been about 10) and I remember listening to it and wondering why there weren’t loads of Hey Yas on it. I remember there was a lot of spoken word on The Love Below. Am I correct?

I think I will re-listen to both now you have brought it up again.

other way round, shirley?

Still, it’s not necessarily the better record for it. A bit like 808s isn’t Kanye’s best record but it’s arguably the most influential one.

Yeah, I feel like this is probably pretty spot on tbh (I fucking love 808s though and probably get more enjoyment from it than TLB)

Aye, that’s what hit me in this listen through as well, way more spoken word/skit types of thing on it than I remembered

Nah. Way I remember it, it was the mainstream press praising TLB and all the hipsters/nerds being like

actually Speakerboxx is the really creative one

The Love Below is very good at its best but is waayyyyyyyy too long.

Stankonia is the Best Outkast Record. As much as I like Aquemini I have way more love for Stankonia.

Yeah, I’d never make that claim I don’t think. Annoys me when people disparage it though.

Stankonia is the Best Outkast Record. As much as I like Aquemini I have way more love for Stankonia.

I think I’d probably agree with this most days you asked me as well.

Love Belows highs are amazing. But about half of that record could’ve happily been left on the cutting room floor.

aquemni
atliens
southernplayalisticadillacmuzik
stankonia
speakerboxxx
the love below
idlewild (I assume, never listened to it)

not much between the top 4 though in truth

There are no other OutKast records.

I do love it, but the sheer number of shit skits always puts me off listening to it. (I’m apparently too lazy to delete the MP3s.)