Full 2 hours on BBC2 on Saturday at 10:45pm. Looking forward to it, because I can’t really remember much of it from seeing it last year. 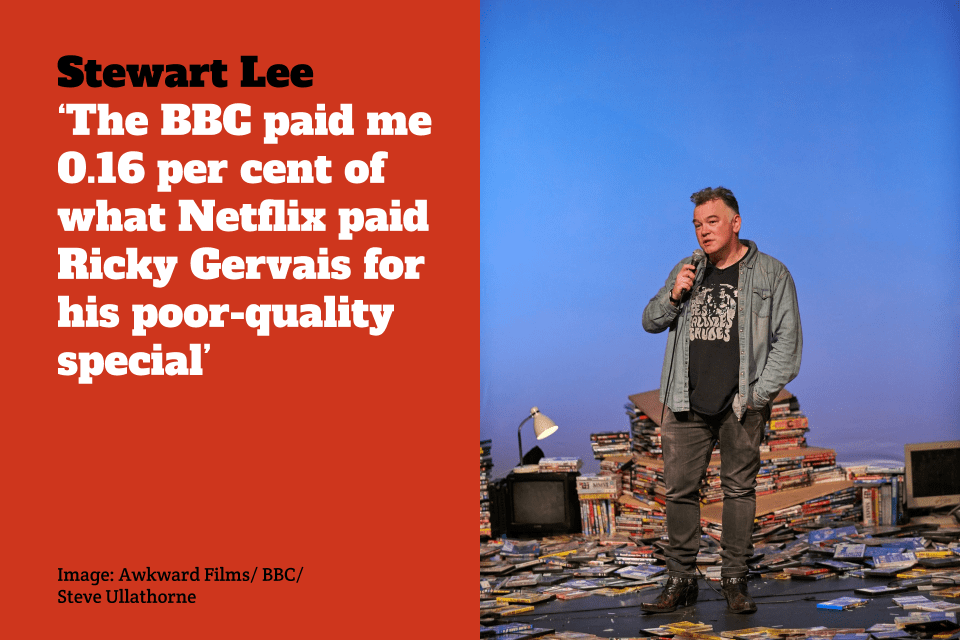 Stewart Lee on 'Content Provider': 'I am a relic revelling in my irrelevance'

"The BBC paid me 0.16 per cent of the fee Ricky Gervais received for his poor-quality Netflix special." Stewart Lee never expected Content Provider, his ‘culturally obsolete’ live show about Brexit and Donald Trump to end up on TV. But here it is.

Between now and the age of 65, I propose five tours, one every three years, with fewer dates but in larger rooms. That’s 10 hours of material, and for me that is only 20 jokes. The end is in sight and Content Provider represents the beginning of the end.

currently a bit over half way through it

Got it recorded and waiting for this weekend or some perfect time to spend the two hours on it. Looking forward to it though, I’m really glad the BBC did this.

love a bit of stew, only stand up i find funny. gonna check this out asap.

only stand up i find funny

he rips it out of people who say this

(i am basically one of those)

Yeah listened to quite a good interview with him where he says if people come up to him and say “Yeah good on you Stu Michael McIntyre’s shit isn’t he??” he takes them to task for it.

where quite a sizeable portion of the people he attracts to his shows like him whilst simultaneously appearing to miss the point of quite a lot of what he says and does.

I went to watch Richard Herring instead.

Suck on those indie points

He just kept going on about someone in the front rows “mothers cunt” last time I saw him. The guy left at the interval

He clearly gets off on the awkwardness

Don’t really understand why anyone would go to a comedy gig and sit in the front row if they disliked the possibility they might become part of the act.

I remember going to a John Hegley gig when I was at university with a bloke who categorically wouldn’t sit on the front row because he wore glasses.

Quite enjoyed Content Provider, but felt like I was smiling along a lot more than I was laughing along. Maybe I was just a bit too drunk.

I laughed at the line about the dragon in a hat though.

Really enjoyed this. Saw him do it a while back at Leicester Sq Theatre, but there were a few things that were either new or that I didn’t remember. I was crying with laughter at the Russell Howard “Maaaatttte” bit.

Also liked the fact it was filmed in Southend where I grew up - ‘a hive of racism’.

Same really! I like other comedians but he’s the only one I’ve been to see in the last few years (along with Richard Herring and Daniel Kitson).

I think that’s just it. I do wonder who the people are who keep making themselves giggle throughout the bits he labours, or the bit where he was demonstrating what under 40s do on their phones.

I can’t really do the prolonged titter over a 5 minute period that some folks do!

which included a richard herring megafan

I know one of these. In fact Herring namechecks him every now and again. In fact I’ve got him to thank for noticing that Content Provider was on. He posted a clip of the GoT bit on Facebook. I then googled GoT mug and clicked on a picture and now Amazon thinks I’m a GoT fan.

Herring’s central problem is he tries way too hard. He really does.

He just kept going on about someone in the front rows “mothers cunt” last time I saw him. The guy left at the interval

Confirmation of the above point right here.

Actually I’d forgotten this bit and I think I did find it quite funny at the time. Reckon my alcohol level is to blame here.

Oh, it was funny. But not consistently funny over a 5 minute period? Or was it?