Can’t believe this hasn’t got a thread?? It’s only 3 weeks away…
We went last year and the line up was pretty spectacular. Got early bird tickets for this year, and though we’ve been a little underwhelmed by the announcements, as I’ve worked through the acts given acts I don’t know a listen I’ve been quietly impressed…
Is anyone going?

The lineup seems a bit of a step down from previous years, but I’m looking forward to it.

Friday night is the same night as MBV in Birmingham. Oof!

Was going to go until I spent all of the money at Primavera.

The more I’m listening to the bands, the better it seems. Deaf Kids, Mario Batkovic, Andrea Belfi, Joashino, Mesange, Goat (JP), Housewives, Olanza are all completely new to me and are all really interesting. Put on top of that a bunch of bands I already knew a bit about The Ex, Shirley Collins, Tomaga, Cattle, Gnod, Danial Higgs, Dwarfs of East Agouza, Gum Takes Tooth, Moor Mother, Gazelle Twin… I’m getting pretty excited about it…

I’ll be there. Line-up’s really up my street. Always a banger anyway

Me there too. Had a bit of a look for some stage times last night without success, anyone seen anything?

My first time there, going along with the children (3 and 8), the Ex kids show sounds … intriguing, should be great. Mrs prob is taking the slack whilst I do the late shifts, but anyone got any thoughts on how well the stuff earlier in the day will work with the kids?

Last year was my first one (no kids in tow though). Friday was more like a normal gig with things kicking off in the town hall at 7pm then moving over to the festival site (20 minute walk through town) for 9ish finishing around 1. Sat music started around 4 and went on til 1. Sunday started around 3.30 and went til 11. From mid dayish there were cinema screenings and the odd workshop happening before the music, in places near to the festival site. I think there will be enough interesting music early in the day to keep your kids happy, last year on saturday before 9pm there was Haress, Jessica Moss, Laura Cannell, Grey Hairs, Kuro Maga, Laniakea and Richard Dawson. If I had seen that little lot when i was 8 it would have been a pretty memorable day.

I didn’t get to the kids gig last year (melt banana) reports back were it was good (if maybe a touch loud), I have been to supersonic kids gigs at other festivals though (supernormal, sin eater) and they have been great (woven skull and the tor invocation band) volumes at those were ok (my kids were toddlers so we had them in ear defenders just in case). I imagine The Ex will be amazing, I don’t think they have a stage so it’s all pretty up close and interactive.

Last year I seem to remember stage times coming out on the Friday a week before, so Im guessing the same will happen this year (ie day after tomorrow)

That’s brilliant, thanks for the really helpful reply!

did this mix for appetite whetting…

Stage times here;
http://supersonicfestival.com/2018/06/15/supersonic-2018-timetable/
I know Shirley Collins is one of the headline acts (and one I’m really looking forward to), but to pretty much close the festival??? Don’t you think that’s a bit weird…? A Sunday afternoon set would have been really good (why do organisers think headline acts have to play last rather than thinking about the overall flow of the day???)
Ideally having the Modern Rituals segment before anything else would have been great, that would have allowed for a crowd to get settled and into the entirety of the performances, as is you can imagine lots of coming and going of audience members unsettling the whole thing…
UKAEA at 6pm on a sunday? Too early, that set should be one of the late night slots surely?
The Gnod - Yonuhanna Variations clash is really frustrating…
Also, stage 1, stage 2, stage 3?? Where are these venues?
There’s always going to be clashes of course, and Friday and Saturday look free from problems, but Sunday…
Still, looking forward to it.

I was really happy with how it seemed to be panning out. Weird they haven’t named the stages though, aye. Stage 1 is the college innit. Stage 2 is Boxxed? Stage 3 that little shed thing.

Are the stages close to each other? Was it easy to move around in previous years or is it a queuing nightmare and better to stay in one venue for the later acts?

I’m not able to stick around for the Sunday evening so big gutted to be missing Gnod (in particular).

Depends if it’s the same as last year… Last year the 3 main venues (which hosted everything except the opening acts in town hall, cinema screenings and kids show) were all next door to each other along Floodgate Street; Main stage was ‘The Crossing’ (part of the college on the corner) which is a big professional air conditioned purpose built concert hall. Stage 2 was ‘Boxed’ a nightclub, pretty decent PA/ lighting etc, bought in for festival. Stage 3 was an old ware house space between the 2, again set up specially for the festival. The only thing I had to queue for last year was the toilets. I got the feeling that it wasn’t at capacity so you could easily walk in to see any act at any time, which was great. Last year happened to fall on one of the hottest weekends of the year, which did make some of the day time acts in Boxxed and stage 3 under attended as it was a real act of stamina to stay in those spaces. The festival market/foodhall/hub was based in the crossing courtyard. You had to leave the festival each time you left a venue and go back past security entering each venue, which was a bit painful if you had a bag (very quick search) but not too much of a bother (they allowed drinks to move from one venue to another which was a positive).
I say it depends if it’s the same as last year simply because they haven’t actually announced where the stages are yet. The festival box office is back on floodgate street, but the promo material was mentioning that this year supersonic is returning to the custard factory which is a couple of streets away and where the festival always was prior to last year… So after all of that writing, it could be somewhere else altogether…

Pretty sure it’ll be across those same three stages. God, yeh, you’re reminding me of the insane heat last year - especially in Boxxed and that other little stage. Hottest shows I’ve ever been to I think.

How was it for everyone then?

My first time there and was very impressed. Slightly challenging to make the most of it with 2 children in tow, but from what I did see Andrea Belfi, Mario Batkovic and - more than anything else - Cattle were the highlights.

Shame the sabbath karaoke didn’t really take off (at least what I saw), wrong environment for it
I guess. Was a highlight of a previous supernormal festival for me when they did a fall vs sabbath karaoke. 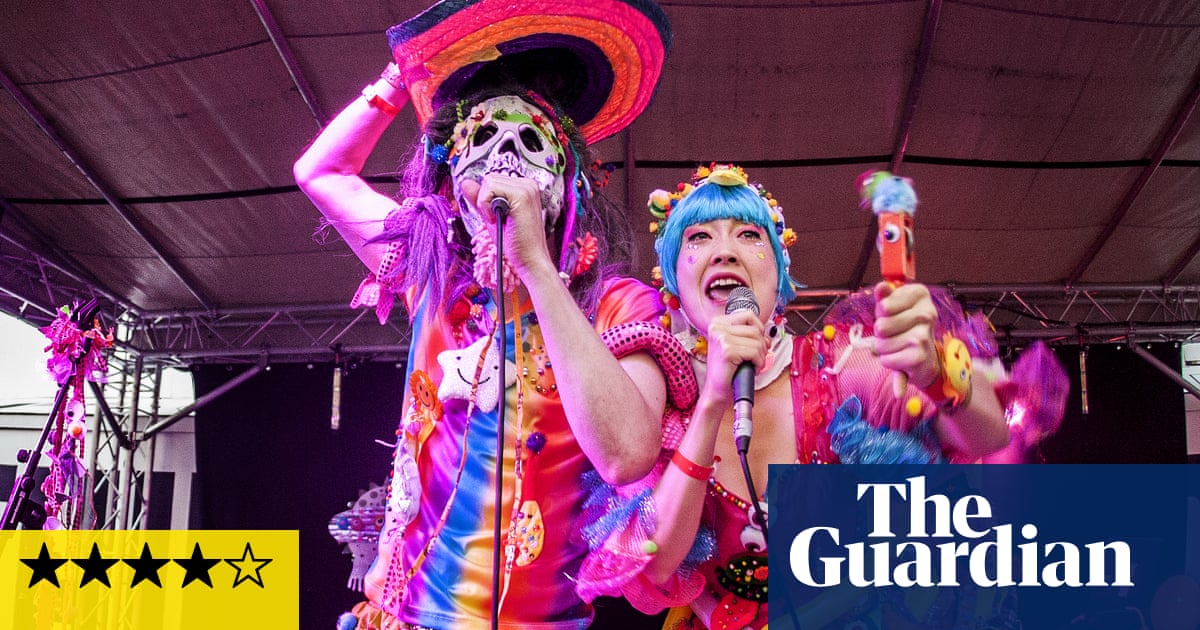 Yeah, that was a wonderful weekend.

And, yes, I agree Cattle were an absolute highlight. Raw total power. I think Goat and Shirley Collins were my favourites of the whole weekend though. Both fascinating, all-consuming sets.

Really nice to be back over at the Custard Factory. Sorry @bealsy for doubting they were gonna change stages up again. Was pretty hilarious when Giant Swan were making bits of stage 2’s ceiling fall into our pints though. That was fookin’ loud m8s.

Yeah, karaoke never kicks off at Supersonic in the same way it does at Braziers. I almost did Fairies Wear Boots but got scared. There were some good confident people who got up in the end though

Yeah, we had a blast. The custard factory worked, and I actually think it was better than last years set up, there were seats at stages 2 and 3 and the cinema was a nice respite. The outdoor stage was super in the weather we had. As nice as the crossing’s stage is, the ‘market place’ and outdoor food bit is just not conducive to hanging around in.
Performance Highlights;
Goat, Mario Batkovic, Dwarfs of East Agouza, Kyham Allami doing Terry Riley’s ‘In C’, UKAEA, Gnod, Tomaga soundtracking Lucifer Rising, Housewives, Cattle, Mesange were all supurb.

Where do I think they could do better?
They need to find a 4th space, the market place doesn’t work for anything other than a walkway and selling stuff. Putting Kyham Allami, The sabbath Karaoke, Life Drawing (and I believe, as I wasn’t there) some of the Quietus chats on there just doesn’t work, people amble past the whole time which kind of detracts from what ever is going on.
Clashes - They always happen, but when the clashes are between stage 1 and stage 2/3 that walk suddenly became too far (Fri and sat they had it covered but Sun was ripe with clashes)
Artist in residence/ procession - Was it worth bringing over and putting up for a week an artist for a 20 minute procession and some branding?? Think they probably need to do a cost benefit analysis on that one.
Faka/ Angel Ho Visas - 4000 euros… no performance. I’m pretty sure they will have learnt something from that.
Open the box office a touch earlier on the Friday, the queueing fiasco trying to get into housewives was a bit unnecessary.
Not wanting to be negative though, it is a great festival and as last year I won’t think twice about getting an early bird ticket again for next year. This year really cemented that. We knew such a small percentage of the acts playing this year before we went, but there was a lot of entertaining stuff on throughout.
Sad there’s no Supernormal on this year. It’s still June and that’s my festivals done for 2018!!!

yeah, the 9pm box office thing was ridiculous. Felt sorry for Croww who had about 10 people watching him. Re: clashes, I don’t know why they don’t start the music earlier - like 1pm on Sat and Sun. Might sort that.