How important are table manners to you? Do you think less of people (obviously but let’s pretend others don’t mind) with poor table manners?

Parents: do you insist on good table manners? 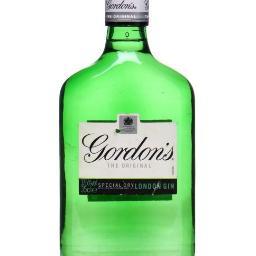 @mumsnet_madness
“Leaving aside the issue that ketchup isn’t that high brow a food in the first place (!)” https://t.co/8CVODkaPtX 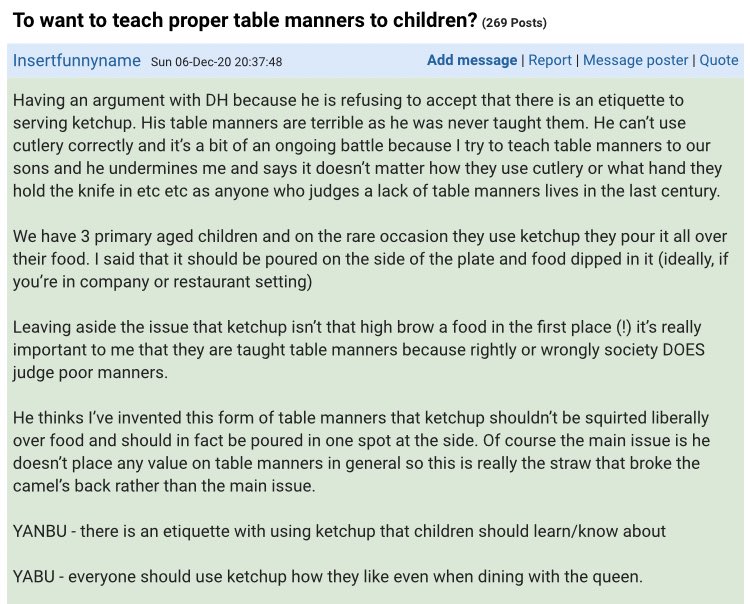 My siblings are I were always threatened by my parents with table manners lessons by my great grandma.

She used to pull people up for placing elbows on the dining table. Can’t remember the last time I thought about that, both in myself and whilst observing others

The ones that are about not being disgusting = Fine, please do those things
The daft arbitrary ones about elbows on the table or whatever = Who gives a shit

My wife is incapable of using a knife and fork (won’t cook instead of can’t cook). She holds the food steady with the knife and drags the food apart with her fork. It’s maddening

Stuff like how to place cutlery, elbows on the table etc are nonsense.

Think table manners just applies to normal manners - don’t be rude or disgusting or anything. Couldnt give two shits where the fork is on a table

Although if someone wishes to do away with cutlery altogether and just cram the food in with their hands, all for that

Couldn’t really give a shit about ones like elbows, not using a knife ect… Manners that stop you looking like a warthog at a watering hole are there for a reason, so stop eating with your mouth open

I think getting stuck in is great, provided you’re clean then being more tactile with food is more enjoyable. But at the same time you should know that some people would prefer more rigid table manners.

I dont let M dick about, try to get her to sit down and stay at the table, and sit at the table with me until we’re both finished but I’m not all that insistent. I hated that feeling as a kid of not understanding rules surrounding eating - no elbows on the table utterly baffled me and when you’re smaller sometimes you need to put your elbows on it.

(Most of this is moot though as we rarely eat together and 9 times out 10 we don’t use the table - table is used when her mates are over though as most kids seem to eat like animals and make tons of mess. I’m lucky to have a neat kid!)

Imagine eating at a table

Could not give less of a fuck, it’s some bullshit classist shibboleth.

First (and almost only) formal dinner I went to in an Oxford college, the arsehole sat next to me berated me on taking the wrong knife for buttering a roll. I knew it was the wrong one, but the person on the other side of me had taken mine, so I just carried on along the chain.

Same person then asked, when I said I was from Glasgow (as if anyone in the room would know where Airdrie was) said “oh, are you going to stab me then?”

Next time I saw him he had a black eye.

just don’t have dinner with the queen, then you avoid this whole issue

Can you add ‘Don’t talk with food in your mouth’ to the list as well?

That genuinely makes me feel ill - there was that advert (for KFC, maybe?) a few years ago with office workers talking while chewing and I couldn’t watch it.

Let’s all make a new manner, that might be a fun activity, right?

My submission is: “No items of clothing that match the colour of any of the things on the plate” (eg No green t-shirts allowed if peas are being served)

That ketchup thing is hilarious, and a minor point of contention between me and my other half (so minor that I haven’t even mentioned it, just raise my eyebrows when I do the washing up).

Anyway, I squirt ketchup all over my chips, she puts a blob on the side. And when the meal is done, I haven’t wasted any ketchup, yet there’s always surplus left on her plate. So damn you etiquette and your in-built wastage!

Would not occur to me that reaching for food is a bad thing?

Surely worse to get people to stop eating to pass stuff to you. Depends on size of table I guess, hard to marry up these rules when I have a small round dining room table barely big enough for 2